A review of the Inspector General’s investigation into former Commandant of the Marine Corps Gen. James Amos provides new insight... 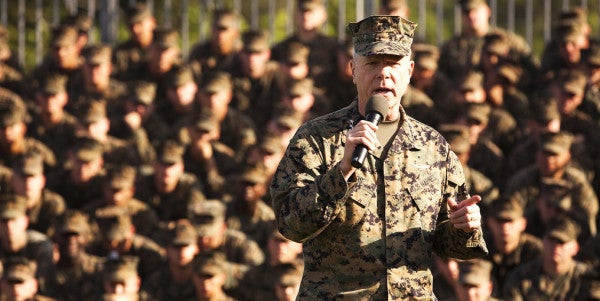 A review of the Inspector General’s investigation into former Commandant of the Marine Corps Gen. James Amos provides new insight on the Marine leaders’ priorities following the 2011 Taliban urination scandal.

In a long-form report for Marine Corps Times, Andrew deGrandpre writes that the findings in the report may raise questions about the thoroughness of the inspector general investigation, and that “to Amos' harshest critics, the IG's findings are rife with shortcomings and oversights, at best a demonstration of incompetence and at worst a whitewash.”

The inspector general’s report was finalized in November 2013, but was only made public after a federal judge in Houston, Texas, ordered its release last month, the Marine Corps Times reports.

The report details the handling of James Brandon Conway’s promotion to lieutenant colonel, at a time when Amos barred Marines in Conway’s unit from similar career advancing moves, which led to allegations of favoritism, as Conway’s father was Amos’ predecessor as commandant, retired Gen. James Conway.

After the video surfaced showing Marine snipers urinating on the bodies of dead Taliban fighters, Amos placed a hold on all moves, including promotions, within 3rd Battalion, 2nd Marine Regiment, the snipers’ unit.

The inspector general’s investigation cleared Amos of wrongdoing, and found that his decision-making in Conway’s case was “reasonable” and not an example of favoritism. Following the urination scandal, Amos was also accused of pressuring top officers to pursue harsher charges against the snipers in the video. Another inspector general’s investigation cleared him of that, as well.

Cases involving individuals like Amos are referred to as ISOs, or investigations of senior officials and typically have two investigators, a lead and a back up, explained Marguerite Garrison to Marine Corps Times. Garrison is a retired Army colonel and oversaw the inspector general's investigation on Amos.

“It's so easy to be a Monday morning quarterback and second guess 'well, why didn't you go down this line?' But that's why we have to do re-interviews of folks,” Garrison told the Marine Corps Times. “As a rule,” she added, “I believe that our investigations are thorough.”

However, not everyone is satisfied with the reports’ finding.

“Amos' was judicially admitted to a military judge in writing by Marine Corps prosecutors assigned with the unenviable task of explaining and minimizing Amos’ misconduct,” said Lee Thweatt, a former Marine judge advocate who provided the inspector general’s report to the Marine Corps Times. “Yet the IG didn't even discuss that striking judicial admission in its report. The IG ended up becoming part of the problem instead of part of the solution. Worse, they fought for over a year in federal court to prevent the Freedom of Information Act from shedding light on their reports.”