Rep. Madison Cawthorn decided that a hearing on burn pits was a good time to clean his firearm

When asked about it his spokesman reportedly said, "What could possibly be more patriotic than guns and veterans?” 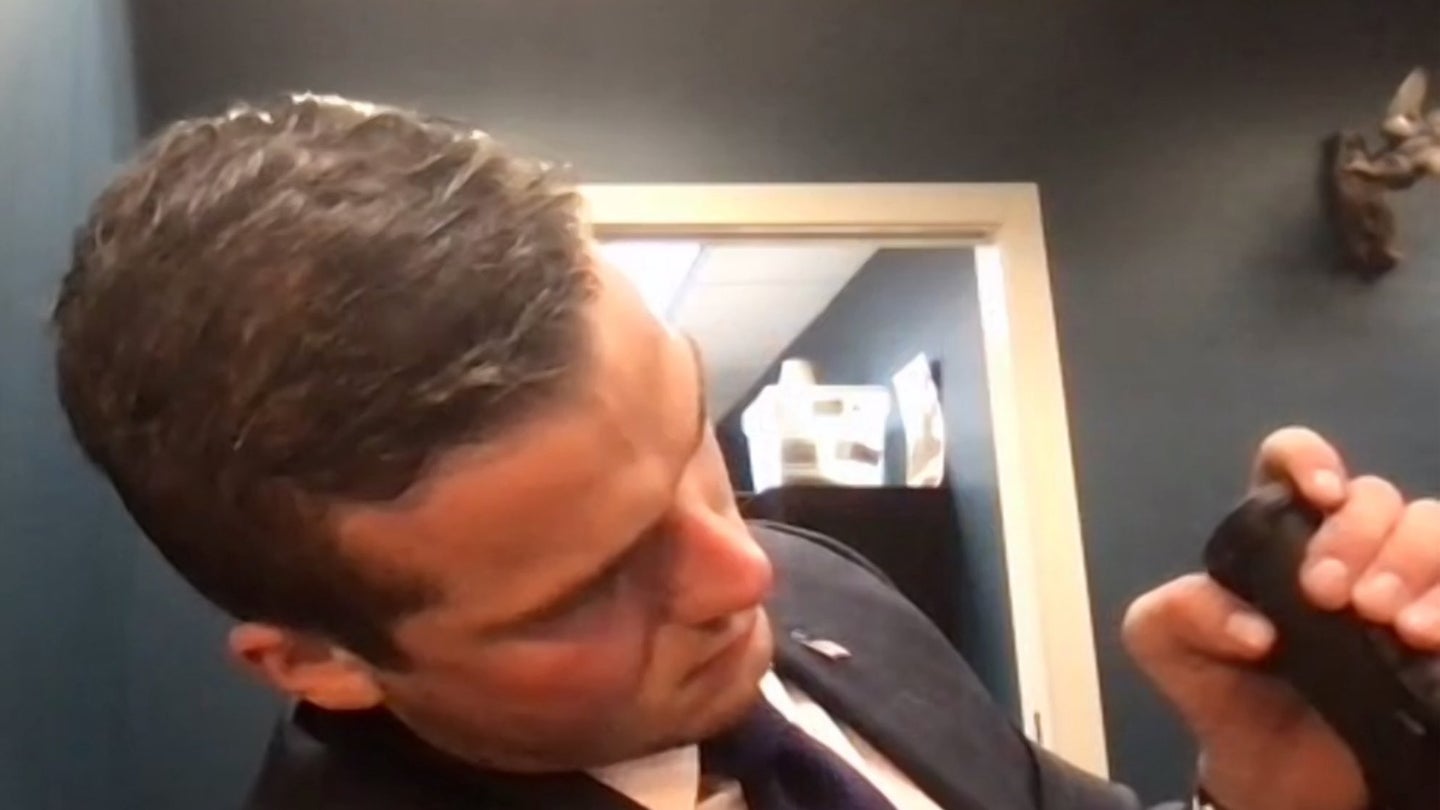 Perhaps nothing says “what you’re saying is important to me” quite like deciding to start cleaning your gun in the middle of a conversation — which is exactly what one congressman did this week during a hearing on toxic exposure.

Rep. Madison Cawthorn (R-N.C.), a 26-year-old lawmaker and sweetheart of the far-right, “fiddled with his black pistol” for several minutes during a House Veterans Affairs Committee hearing on Wednesday, according to The Daily Beast. The hearing’s focus was the lasting impact of toxic exposure from burn pits on U.S. service members — a topic that advocacy groups have fought to have more attention on for years.

“Here we are taking time out of our day, including the representatives, to talk about a very important issue — a life or death issue for many veterans — and it’s like, I’m sorry am I boring you? You’re not paying attention,” Jen Burch, an Air Force veteran who currently works with the Iraq and Afghanistan Veterans of America (IAVA) and who spoke during Wednesday’s hearing, told Task & Purpose.

When asked by The Daily Beast if Cawthorn thought it was appropriate to use that time to clean his gun, his communications director Luke Ball told the outlet: “What could possibly be more patriotic than guns and veterans?” Ball has not responded to a request for comment from Task & Purpose.

A screenshot of the moment was shared to Twitter on Wednesday evening by Lindsay Church, the executive director and co-founder of Minority Veterans of America, who was participating in the hearing.

Burn pits, used by the military in Afghanistan and Iraq to get rid of waste by dumping refuse into a pit, or barrel, and lighting it on fire, have long been believed to be the cause of serious health conditions that service members developed over time. One family of a Minnesota Air National Guard Tech Sgt. blamed burn pits for her pancreatic cancer. Her doctor believed it was likely caused by the burn pit, but couldn’t prove it. An Army staff sergeant had to have two double-lung transplants which he also attributes to the toxicity of the burn pits.

“It makes me really mad,” the Air National Guard Tech Sgt. Amie Muller told the Minneapolis Star-Tribune in 2016. “I inhaled that stuff all day, all night. Everything that they burned there is illegal to burn in America. That tells you something.”

Though “burn pits” are often what comes to mind when discussing “toxic exposure” the risks, and the various negative impacts on health, are quite broad, as Keith Dow noted for Task & Purpose in November 2021:

During one’s military career, regardless of time, grade, or job specificity, a service member will inevitably experience multiple exposures to various toxic substances (fuel, chemical, exhaust, ammunition, explosives, etc), and these exposures impact the human body in a multifactorial way. The specificity and volume are dictated by military occupational specialty and time in service, but service members will ultimately be exposed to toxins whether they are turning wrenches in a motor pool or kicking doors in a combat zone. The risk of exposure is inherent to military service and accepted within the culture of perseverance and (i.e., chronic stress, inadequate sleep, environmental conditions), but understanding the sporadic nature of toxic exposure and its impact will help to proactively identify and mitigate risk.

Despite the severity of the issue, Cawthorn “worked on his pistol out of sight for several minutes,” according to The Daily Beast — though it became “plainly visible” during one veteran’s testimony.

“Total disregard and disrespect to America’s warfighters,” she told The Daily Beast. “He was so bored with the topic. Those that are sick and dying and the widows in his district should see how much he cares about the issue.”

It was “pretty disrespectful,” Burch said on Thursday, adding that she got the impression he wasn’t paying attention throughout the hearing because of the questions he was asking, and that it seemed he hadn’t read up on the issue ahead of time.

“While he’s sitting there not paying attention, it just makes us probably have to work even harder, and it’s like we’re already putting more lives in danger waiting for this bureaucratic system to catch up,” she said. “I wonder when it comes time for him to vote, will he be able to make an educated vote on this and vote the right way, because he might not have all the facts because he wasn’t paying attention.”

Cawthorn started gaining notoriety on the campaign trail in 2020 with a tragic story about how he intended to go to the U.S. Navy Academy, but was left paralyzed at 18 years old in a horrible car accident.

That narrative was called into question in 2020, when the Asheville Watchdog reported that Cawthorn had already been rejected by the Naval Academy before his car accident.

His support of the military is “at the core of the public persona he built,” the Beast reports. Indeed, it’s something he talks about often. He represents a district roughly six hours from the sprawling Army installation of Fort Bragg, North Carolina — a district that, as he put it in July, is “home to THOUSANDS of courageous and heroic veterans.”

“Freedom is born through the sacrifice of patriots,” he tweeted in November. “Their sacrifice must never be exploited.”