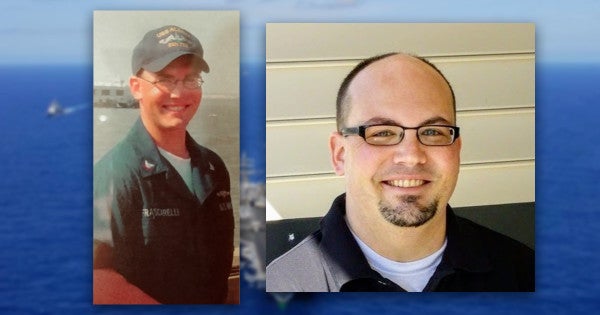 His whole life, Anthony showed a penchant for analysis and investigation. After completing an associate's degree from Salve Regina University in administration of justice, Frascarelli joined the Navy.

“It was a big step when I was joining, going completely out on a limb to try something different,” he recalled. “I really wanted to do something cool and also have an impact with the country.”

“We were basically like the eyes and ears of a ship that had no windows,” Frascarelli said. Of all his job tasks, he noted that his favorite was “being the command tactical oceanographer: making sure that we could be positioned well to not only not give ourselves away by sound, but you could do investigations down by the floor where they couldn't hear us.”

Although he loved his work and shipmates, Anthony chose to cut his career in the Navy short after four years.

“I found out my mom had stage four cancer,” he said, “so that kind of derailed a lot of my hopes for staying in a little bit longer. But I really wanted to be somewhere close by if I had to go and help.”

Frascarelli enrolled in the Transition Assistance Program, which prepares separating service members for civilian employment. At a TAP job fair, he was offered an interview at Micron Technology.

“You hear about all the crazy science that goes into making microchips and say, 'Wow, I couldn't actually help work on this stuff,'” he said. But the Micron recruiter saw his SONAR experience differently.

“It was just like, 'Really? You'll let me do that?'” Frascarelli recalled. “And they were like, 'Yeah.'”

After 12 years at Micron Technology, Anthony heard about Splunk, a data analysis company that helps businesses pick out meaningful trends from the noise of machine data — just as he once picked out likely threats in an ocean full of sound. Even better in his view, Splunk works with a variety of military contractors.

“I really liked what I did over at Micron, being able to do hard engineering,” Frascarelli said. “But to be able to help military contractors make better things so our guys out in the field have a better experience, come home safe, and can do their jobs more effectively, that is one of the biggest draws to why I decided to move on to Splunk.”

Before applying, Frascarelli completed the four free training courses available to active duty service members, veterans, and their spouses. He recommends the courses to anyone looking for work, since Splunk works with 17,000 companies in 110 countries, including 90 of the Fortune 100 companies.

“There's over 6,000 jobs in the U.S. that are Splunk-related,” Frascarelli said. “Many of the top brands in the world are looking for people with Splunk experience. Certified Users and Power Users are in demand, and I think they could definitely benefit anybody.”

Splunk's free courses are offered as part of its 10-year, “$100 million Splunk pledge,” which its website describes as “our commitment to research, education and community service.”

As a junior sales engineer, Frascarelli now works with prospective and current Splunk customers to demonstrate the capabilities of Splunk's software tools and applications for that customer's business needs.

“The product is mind-blowingly awesome,” he said. “I love seeing that 'Aha!' moment when they realize, 'Wow! We're going to be able to pull all this cool stuff out of machine data.'”

Frascarelli also loves the variety in his day-to-day tasks, including work that takes place in the Splunk office, remotely from his home, and at customer sites.

“It's kind of like going back to why I joined the Navy in the first place,” he said. “It's getting out of that comfort zone and really embracing being able to get to solve problems.”

Bringing A Military Mentality To Work

Anthony notes that “wanting to really dig deep for answers” has been one of the biggest advantages of bringing a military mentality to his civilian work.

“On the oceanography side of things, you're really delving down into the nitty-gritty,” he said. “Having that kind of mindset helps.”

Whether they plan to work at Splunk or not, Frascarelli recommends that service members looking to go into engineering or data analysis “be tenacious. Look back to what you did in the military, whether it be crypto, SONAR, or intel. Use this training now, because it's going to be super viable in the superconnected state of the world — especially the mindset, because you've been immersed in it for years.”