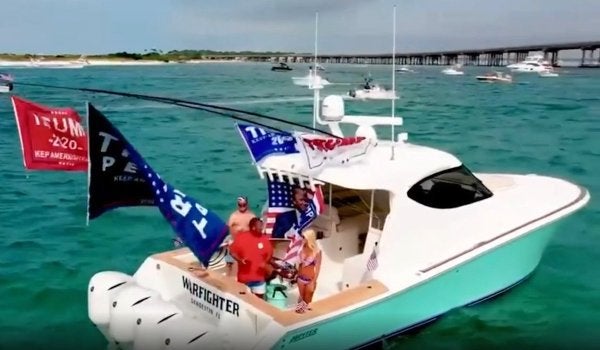 Brian Kolfage, the wounded Iraq veteran indicted for fraud on Thursday, allegedly used fundraising efforts surrounding a privately-built wall on the U.S.-Mexico border to fund a “lavish lifestyle” which included the purchase of a boat he named ‘Warfighter,’ according to prosecutors.

A former Air Force security forces defender who lost both legs and his right arm while serving in Iraq, Kolfage had raised more than $25 million through GoFundMe for a privately built wall along the southwestern border since December 2018.

But instead of funding construction of a border wall, hundreds of thousands of dollars went right into Kolfage’s pockets, according to prosecutors.

From the Bannon indictment: Someone apparently used border wall money to buy themselves a nice little pleasure craft named Warfighter that they're about to lose

“While repeatedly assuring donors that Brian Kolfage, the founder and public face of We Build the Wall, would not be paid a cent, the defendants secretly schemed to pass hundreds of thousands of dollars to Kolfage, which he used to fund his lavish lifestyle,” Audrey Strauss, the acting U.S. Attorney for the Southern District of New York, said in a news release.

As a result of the indictment, the U.S. government has seized millions of dollars in funds from multiple bank accounts belonging to the border wall effort, as well as any of Kolfage’s property that “constitutes or is derived from proceeds traceable to the commission” of his alleged fraud.

“She’s well-appointed with accommodations for five, onboard entertainment, spacious head, and a full galley,” according to Jupiter Marines. “The only caveat? Filing extended float plans to exotic ports.”

While the indictment doesn’t specify if Kolfage or one of his co-defendants was responsible for purchasing the boat, the Air Force veteran apparently made good use of ‘Warfighter.’ According to a post on his own Instagram account, the vessel took part in the Trump-inspired boat parade in Destin, Florida over this past July 4th weekend.

When asked about the indictment on Thursday, Trump commented that he didn’t “know anything about” Kolfage’s border wall effort and “didn’t like that project” because he thought it was “being done for showboating reasons,” a statement which is both demonstrably false and so on the nose it’s almost unbelievable.

Kolfage did not immediately respond to request for comment from Task & Purpose. He is expected to appear in court on Thursday. In the meantime, we now go live to the U.S. Attorney’s Office for the Southern District of New York: