‘Retreat? Hell! We just got here!’ is 103 years old and still badass

The French didn't agree with the sentiment. 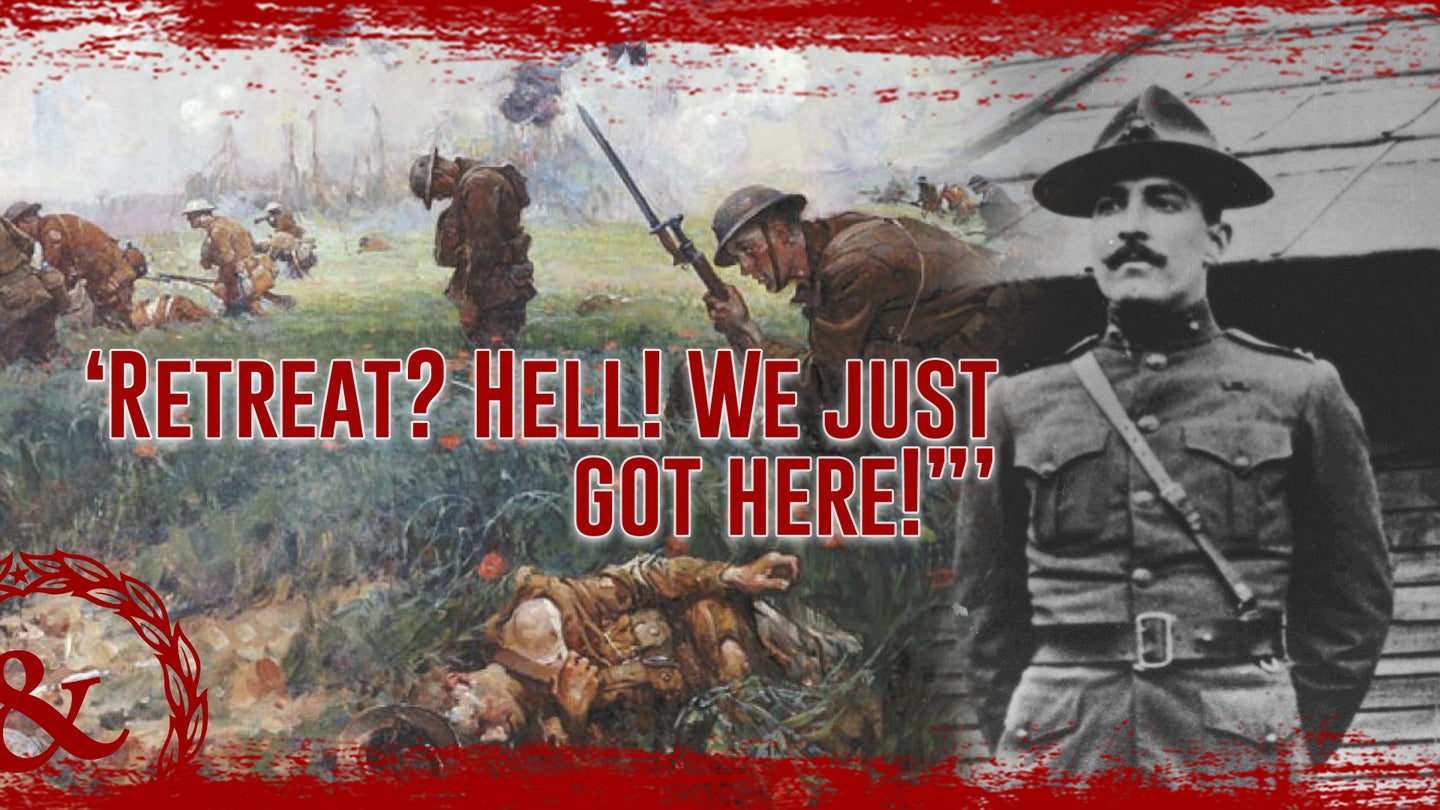 A Marine officer showed up to the front lines of combat on this day 103 years ago and uttered one of the most badass and enduring quotes of all time: “Retreat? Hell! We just got here!”

The phrase ‘Retreat Hell’ has been the motto of one of the Marine Corps’ most-decorated infantry battalions for more than two decades, and has long served as a motivational quote to inspire Marines past and present. But on June 2, 1918, a captain named Lloyd Williams thought to say the iconic cool guy quote in the heat of battle during World War I, and in so doing cemented himself in Marine lore.

The Americans had been in the war for little more than a year by then and the Marines were eager to get into the fight. A large number of college athletes and “unusually high quality of men presented themselves for enlistment” in the Corps, according to an official Marine history of the 6th Marine Regiment. They joined experienced officers and noncommissioned officers like 1st Sgt. Daniel Daly and Col. Albertus Catlin, both recipients of the Medal of Honor. Heavy combat came in late May 1918 with a massive German offensive that caused “utter confusion as the allies tried to reorganize their lines.”

Williams was commanding the 51st Company of the 2nd Battalion, 5th Marine Regiment that was fighting alongside the French and expecting a German attack on June 2, according to an account in Leatherneck Magazine. But less than an hour after arriving, Williams received word from a French commander that all American and French forces were to pull back. “Retreat? Hell! We just got here,” Williams reportedly said.

Still, the source of this quote is a matter of considerable debate. It appears on the website of the Marine Corps History Division as a famous quote but is attributed to “several World War I Marine Corps officers” at Belleau Wood in June 1918. A lengthy account of the battle for Defense Media Network and the 2nd Battalion, 5th Marine Regiment attributes the quote to Williams. Meanwhile, the 6th Marine regimental history explains what happened this way:

“The French division commander in that sector thought he still had some soldiers fighting in Belleau Wood west of Chateau-Thierry. He asked the Marines to counterattack. A French colonel, however, advised Colonel Wendell Neville, commanding the 5th Marines, to retreat. He is supposed to have roared: ‘Retreat, hell! We just got here!’ Other American soldiers and Marines subsequently claimed the quotation but Neville himself later attributed it to Capt. Lloyd W. Williams, commanding the 51st Company, 2d Battalion, 5th Marines.”

No matter who actually uttered the words, the underlying message was passed to other Marine units in the 4th Marine Brigade in a less colorful but direct way: “No retirement will be thought of on any pretext whatsoever.” And for nearly a month, the Marines stood their ground and rolled back a German offensive that threatened Paris.

As the Corps historical bulletin Fortitudine put it, “German forces began their advance towards American positions at dawn on 2 June, and quickly received a lesson in rifle marksmanship from the entrenched Marines.”

Machine guns and infantry fire from 800 yards away pounded the German columns, which tried three times to break through before falling back and calling for artillery fire on the American positions. The exhausted Germans eventually pulled back into the forest of Belleau Wood.

By June 6, the Marines were attacking on the outskirts of the forest toward Hill 142, a crucial objective standing 60 feet above the wheat fields in front and the woods behind that offered a good vantage point and fields for fire for whoever held it. The Marines at first directly assaulted the dug-in German positions and were “met by a barrage of machine-gun fire that swept across the forest green lines like wind-driven hail,” said the regimental history. They adapted their tactics on the fly, but Hill 142 was taken later that morning at a great cost: Two companies had been decimated, and only two officers remained.

It didn’t end there. At 5 p.m. lines of Marines moved out toward the woods to take on the 1,200 German troops taking refuge inside and were immediately raked by machine gun fire. “The air seemed full of red hot nails,” one Marine later recalled. The casualty rate was as high as 90% in some units. The chaotic afternoon quickly devolved “into a bare-knuckle brawl” but battle-tested Marine noncommissioned officers like Dan Daly were there to inspire others to keep moving forward: “Come on, you sons of bitches, do you want to live forever?” said Daly in yet another iconic Marine Corps quote to emerge from that battle.

“By the end of the day, the first line of German defenders was overrun and taken,” the Leatherneck account says. “But the cost of the attack was severe. On that day, the 4th Marine Brigade had suffered 1,087 casualties, making it the bloodiest day in Marine Corps history up to that point. More Marines had fallen on June 6, 1918, than in the entire 143-year history of the Marine Corps.”

Although an article by a reporter for the Chicago Tribune proclaimed ‘Marines Take Belleau Wood’ on that day, it would be weeks before that was actually true. The final days of the battle were “vicious, bloody business” for Marines fighting against an enemy “unaccustomed to accepting battlefield defeat,” said Fortitudine. But on June 26, the American Expeditionary Force received word: “Belleau Wood now U.S. Marine Corps entirely.”

In the aftermath, more than 2,200 Americans were laid to rest nearby in the Aisne-Marne American Cemetery. Capt. Lloyd Williams was one such Marine laid to rest in France after falling in battle on June 11, though his remains were repatriated to the U.S. in 1921.

As iconic, and badass, as Williams’ words were at the start of that battle — “Retreat? Hell! We just got here!” — it’s his final words that speak to the caliber of his character, and mark him as a legendary Marine leader. Before he died, Williams was said to have told approaching medics, “don’t bother with me. Take care of my good men.”