"Presumably they want to control the narrative a bit better" 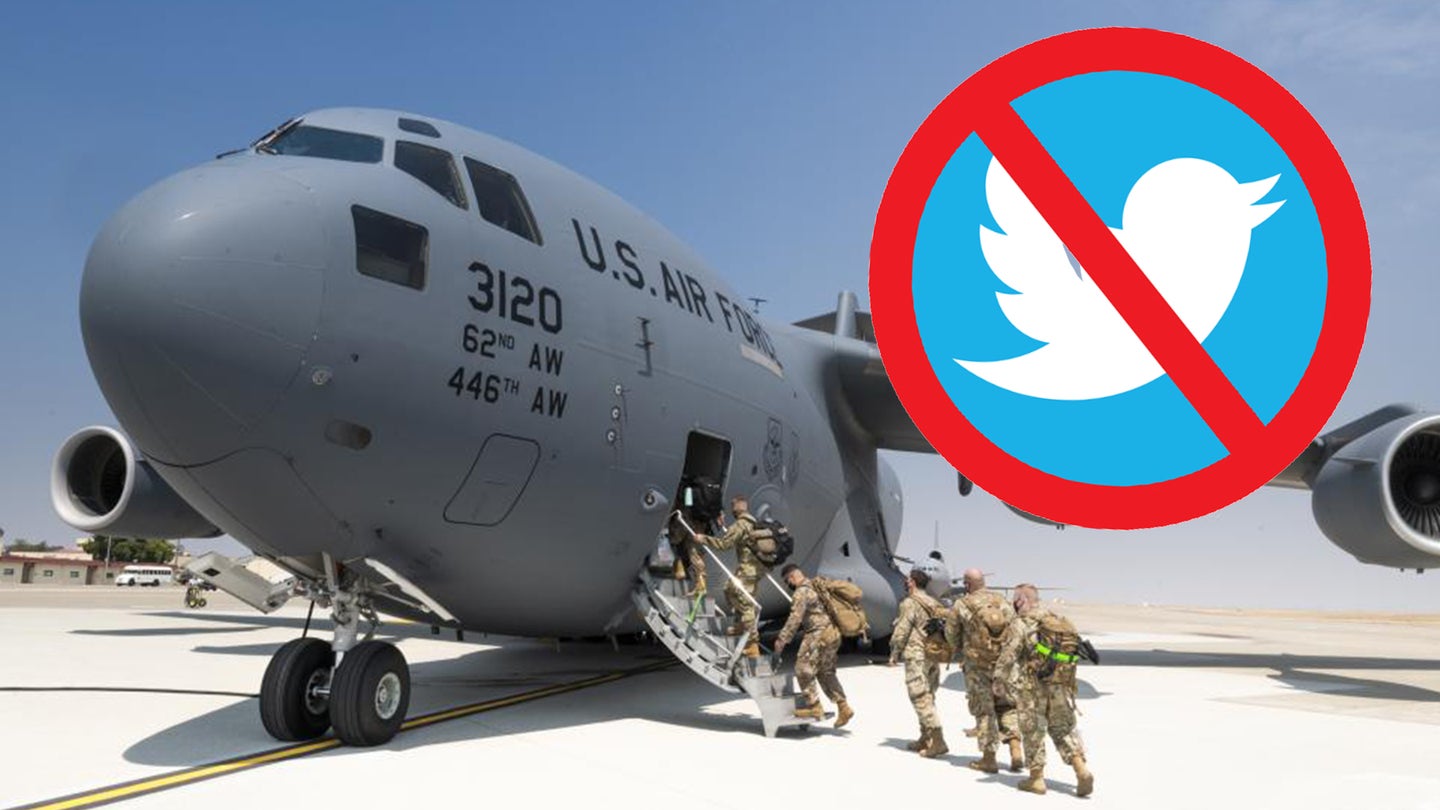 The Air Force clamped down on air crews across the service on Tuesday, telling them that only the Office of the Secretary of Defense “has the authority to release images and statements regarding current operations at this time.”

In the order, signed by Air Mobility Command’s Col. Donald W. Schmidt III, the service reminded airmen that they are “restricted from posting official information via social media. This includes information and images gained or accessed during official duties.”

“There is no gag order,” AMC spokesperson Maj. Hope Cronin told Task & Purpose. “There are existing OPSEC requirements we expect all personnel to observe, and that’s been reiterated to our airmen.”

In accordance with the paragraph 2.15.1, “USAF personnel will immediately abstain from further unauthorized release of official information,” Schmidt said. “Commanders will ensure policy compliance and accountability.”

On the surface level, this all makes sense. Loose lips sink ships, right? The thing is, it’s 2021, and while there are OPSEC requirements in AFI 2.15.1, they are not enforced uniformly across the service. Plenty of airmen post about their jobs refueling aircraft, dropping cargo out of C-130s, and flying search-and-rescue helicopters on TikTok and other platforms. With that in mind, there may be more to this order than just the general wish for operational security, according to the source who shared the order with Task & Purpose.

“What is surprising is that it’s across the board with OSD/PA retaining sole release authority for pretty much anything anywhere operationally related,” the source said. “Presumably they want to control the narrative a bit better with less videos of crushed Afghan refugees in flight and more pics of the truly humanitarian moments like the C-17 loadmaster who covered the child with his flight suit jacket.”

This is the first time the source had ever seen a blanket order put out like this, they said.

“In general, there is increased OPSEC in the [area of operations] but this was sent out to the entirety of Air Mobility Command related mobility commands,” they explained. “We occasionally will get mission-specific gag orders but it’s usually hauling particular equipment or personnel to certain locations. This was just surprising as a top-down across the board action.”

As the source pointed out, the Air Force has had some mixed success with social media this past week. On Sunday, the internet was saturated with images of desperate Afghan civilians crowding the tarmac at Hamid Karzai International Airport to try to flee the conquering Taliban. Social media footage showed C-17 Globemaster III transport aircraft pushing through crowds of Afghans clinging to the plane and hanging onto its landing gear. Later footage showed a few of those civilians falling to their deaths, and the Air Force reported that human remains had also been found in the wheel wells of at least one C-17.

Those images and reports are something no public affairs official wants to see associated with the Air Force. However, many of the images of desperate Afghan civilians came not from service members, but from the Afghans themselves. One example of that is a two-minute-long clip an Afghan man filmed himself clinging to the hump of a C-17 as it took off.

“This shows the desperation of Afghans trying to escape the Taliban,” said Matt Zeller, a U.S. Army veteran and advisor to the Association of Wartime Allies, a nonprofit advocacy group helping to assist Afghan interpreters.

The gag order does not apply to Afghan civilians, because they don’t fall under the Air Force’s jurisdiction. The order does apply to airmen who, ironically, have been the source of the two most famous positive images of the difference that the Air Force is making in Afghanistan.

“The funny thing is that most all of the crazy stuff that seems to be coming out such as the ramp footage at Kabul is unlikely to be even U.S. military,” the source said.

The first image went viral on Monday. It showed a cargo hold of a C-17 overloaded with Afghan civilians. At the time, the crew estimated they had put 800 people in the cargo hold. The estimate was later adjusted to 640, then corrected again to 823 by Air Mobility Command, which said the 640 figure had not included the kids on board. Along with the news were rumors that the C-17 crew were being punished for cramming too many people aboard the aircraft or for not following safety procedures when letting them on board. AMC clarified that these rumors were false.

“The C-17 crew in question is NOT under investigation nor are they being punished,” AMC spokesperson Alexandra Soika told Task & Purpose.

“The bravery, professionalism, and adaptability displayed by the men and women of Air Mobility Command over the past few days were and continue to be awe-inspiring,” said Gen. Jacqueline Van Ovost, the head of AMC, in a Facebook post. “When our nation called, you maneuvered the joint force forward within hours.”

The second image went the other direction: focusing on one individual rather than the crowd. It showed an Afghan child sleeping beneath Baron’s uniform jacket, with an Air Mobility Command patch on the sleeve. This image was seen by millions of people, written about by media outlets across the internet, and helped portray the Air Force as an organization that is saving lives amidst a colossal human tragedy.

“This! This is what our Airmen do,” wrote Chief Master Sgt. of the Air Force JoAnne Bass, the service’s top enlisted leader, in a Facebook post sharing the image of the Afghan child. “No matter the situation, they persevere and deliver hope to those in need. I am honored to serve alongside them.”

Keep in mind that just two months ago, the Air Force was the laughing stock of the military because it announced it would allow airmen to walk instead of run on their physical fitness tests. Earlier this month, the Air Force also broke with decades of military tradition by announcing it would allow airmen to put their hands in their pockets, a move which gave other branches yet another reason to hate on the service. Also known as the ‘Chair Force,’ the Air Force has a reputation for working cushy office jobs and not being as tough as the other branches.

“In the Army we called pockets ‘Air Force gloves,’ so I just assumed they’d been doing this all along,” Jason Kander, a former Army officer, said on Twitter last week, reacting to the hands-in-pockets news.

But even Kander, like so many others across the country, had to admit some grudging respect for what the service is doing in Afghanistan.

“I never try to say anything nice about the Air Force, but I would love to to be one of those C-17 drivers or crew members lifting Afghan families to safety right now,” Kander said on Twitter on Friday. “What a clear and fulfilling mission.”

Another Twitter user had a similar reaction. Her mother was a Navy veteran, her dad worked with the Army, and her son served in the Marines in Iraq.