'Based on our investigation, at the tactical level, this was not preventable.' 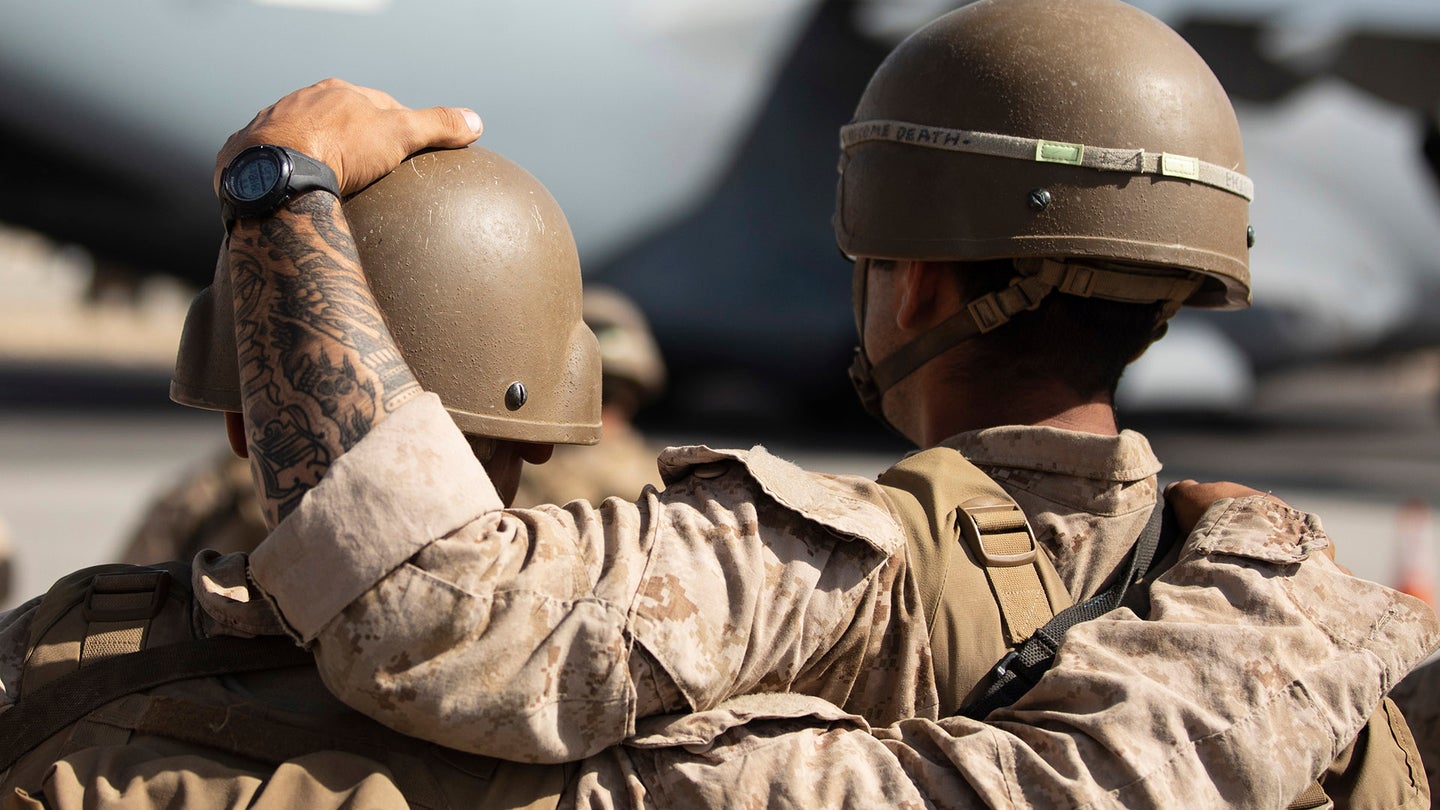 In this image provided by the U.S. Marine Corps, Marines honor their fallen during a ramp ceremony as the transfer cases with the remains are loaded onto an U.S. Air Force C17A Globemaster III at Hamid Karzai International Airport, Friday, Aug. 27, 2021. (Photo by Master Sgt. Alex Burnett, of the 82nd Airborne Division public affairs, via AP).
SHARE

An investigation into the deadly suicide bomb attack on Aug. 26 that killed 13 U.S. service members at Hamid Karzai International Airport in Kabul, Afghanistan reveals just how horribly exposed the American troops guarding the airport’s gates were, and how little they could do to protect themselves.

Eleven Marines, one Navy corpsman, and a psychological operations soldier were killed by the suicide bomber, who set off 20 pounds of military-grade explosives at the airport’s Abbey Gate, the investigation found. The explosion launched numerous 5 mm ball bearings at the U.S. troops and Afghans outside the gate, creating injuries that doctors first mistook for gunshot wounds. Between 160 and 170 Afghans died from the blast.

Military officials briefed reporters on Friday about the investigation into the incident, which determined all the deaths and injuries at Abbey Gate were caused by the explosion and there was no ensuing gun battle, as initially thought. U.S. and British troops fired dozens of warning shots after the blast, and that contributed to initial reports that gunmen had opened fire on the crowd of Afghans.

The investigation also found that the American troops at Abbey Gate faced an increasingly dire security situation and yet they continued to shepherd people to safety right up to the moment when the bomb went off.

When Kabul fell on Aug. 15, thousands of desperate Afghans flooded to the airport, which was the only means of escape from the Taliban. The Pentagon dispatched about 5,000 U.S. troops to help secure the airport during what became the largest noncombatant evacuation operation in the history of the American military.

While U.S. service members were at the gates to the airport, the Taliban controlled everything beyond that, forcing the two sides to reach an uneasy truce to provide security for the evacuation efforts. A video posted to Instagram in late August showed Marines and Taliban fighters were literally within arm’s length of each other at the airport’s east gate with a large crowd of Afghans trying to get inside.

The Taliban were supposed to search Afghans and check their documents before they got to the gate, but they became increasingly belligerent over time and repeatedly turned away and beat people trying to be evacuated, said Marine Lt. Col. John Naughton, one of the investigators.

As the Afghans became more desperate, they found ways to get past the Taliban’s security checkpoints, Naughton said Friday. Investigators believe that the suicide bomber used one of these routes to bypass the Taliban and reach Abbey Gate.

With more Afghans showing up at the gate without being screened by the Taliban, U.S. troops had to make sure they had the proper documents, Naughton said. Afghans without the right paperwork were escorted out.

“Marines stated this was one of the most difficult and challenging tasks they dealt with throughout the NEO [noncombatant evacuation operation], as they literally had potential evacuees begging and pleading for their lives as they were being escorted back out,” Naughton said.

The Afghans at Abbey Gate became so desperate that on the day before the attack, a Marine with Echo Company, 2nd Battalion, 3rd Marine Regiment was pulled into the crowd when someone grabbed the muzzle of his weapon, Naughton said. Officials played a video of the incident during Friday’s briefing.

“We show you this video to help understand why there was such a large number of Marines concentrated at the base of the sniper tower at the time of the attack on the 26th, as they needed to be there to control the large, desperate crowd and enable the evacuation to continue at Abbey Gate,” Naughton said.

Yet the Marines did not place additional barriers or physical structures at Abbey Gate because they needed to be close enough to the crowd to pull people out of the mass of humanity, said Lt. Gen. Ronald Clark, commander of United States Army Central.

“They had to have access to the crowd, and they had to have close personal contact with those that they were trying to move to a location to get processed,” Clark said at Friday’s briefing.

One unresolved question is why U.S. military commanders kept Abbey Gate open despite the worsening security situation. Politico’s Lara Seligman later reported in August Defense Secretary Lloyd Austin had warned military commanders 24 hours before the attack to prepare for a “mass casualty event” at the airport with Abbey Gate being the most likely target, but commanders decided to keep the gate open to allow British forces to continue evacuating people.

The investigation found that although military officials were aware of threats against Abbey Gate prior to the attack, they did not have information about exactly when an attack might occur, said Army Brig. Gen. Lance Curtis, head of 3rd Expeditionary Sustainment Command, who served as lead investigator.

Marine Brig. Gen. Farrell Sullivan, the joint task force commander at the airport, held a meeting with British commanders and the Taliban at Abbey Gate just 36 minutes before the bomb blast, Curtis said.

Curtis would not say specifically if partner nations asked U.S. military commanders at that meeting to keep Abbey Gate open.

“It was a topic of discussion; I know that,” Curtis said. “That’s the extent of my knowledge regarding that meeting.”

When a reporter asked Curtis if the attack could have been prevented given the resources U.S. troops had at the time, Curtis replied: “Based on our investigation, at the tactical level, this was not preventable, and the leaders on the ground followed the proper measures; and any time there was an imminent threat warning, they followed the proper procedures: They lowered their profile; they sought cover; and at times, they even ceased operations at the gate.”

By the time the evacuation ended on Aug. 31, U.S. troops had saved 124,000 people in just 18 days, including 6,000 Americans and more than 73,000 third-country nationals and Afghan civilians, Marine Gen. Kenneth McKenzie Jr., head of U.S. Central Command, told reporters at the time.

Army Chief of Staff Gen. Mark Milley, chairman of the Joint Chiefs of Staff, told C-17 aircrews that took part in the evacuation that what they had accomplished was “nothing short of a miracle.”

“What you just did was give 124,000 people freedom: freedom from oppression, freedom from fear, freedom from want, right?” Milley told the airmen during a Sept. 8 visit to Joint Base Charleston, South Carolina. “That is no small achievement. And those 13 that were killed: 11 Marines, one soldier, one Navy corpsman, they died so others would remain free that they don’t even know. That’s the ultimate sacrifice. That’s the most noble thing any of us could ever do.”