Wanna Watch Marines Get Tased? Of Course You Do

Marines with the Provost Marshall’s Office — the Corps’ military police officers — go through some shocking training. In a... 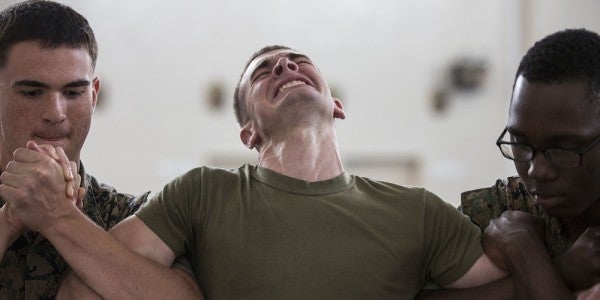 Marines with the Provost Marshall’s Office — the Corps’ military police officers — go through some shocking training. In a pun-filled video by Cpl. Jean-Paul with Marine Corps Installations Pacific public affairs, Sgt. Chris Rosakranse, a non-lethal weapons instructor gives a class on the X26 taser. You know what that means: Time to ride the lightning.

Before PMO Marines can hit the fleet with tasers in hand, they have to go through the proper training, which involves getting zapped with 1,200 volts, administered by direct contact and air-propelled prongs.

It’s an electrifying experience. (Look, I warned you about the puns at the beginning, you knew what you were getting into.) As fun as it is to watch a bunch of Marines yelp — pretty sure one guy screams “Vietnam” when he gets tased — spaz out, and generally lose all pretense of composure as they’re hit with a thousand volts of electricity, you’ve gotta give them credit for testing the taser out on themselves, first, so they know how it feels.

Then again, given how often PMO Marines voluntarily inflict pain on themselves and each other, maybe they’re just gluttons for punishment.