On Thursday, lawmakers introduced a new bipartisan Authorization for the Use of Military Force (AUMF) to officially extend the Pentagon’s... 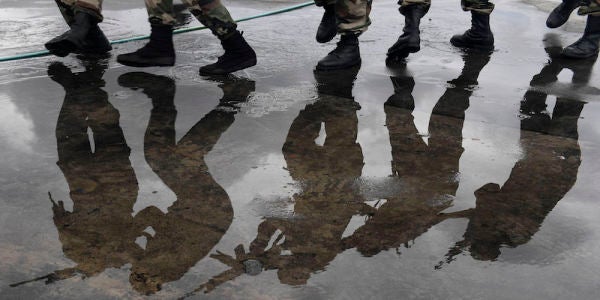 On Thursday, lawmakers introduced a new bipartisan Authorization for the Use of Military Force (AUMF) to officially extend the Pentagon’s campaign against terrorism to include ISIS — and, in turn, throw the brakes on the ever-expanding 16-year-old global war on terror.

Introduced by Sens. Jeff Flake, a Republican from Arizona, and Tim Kaine, a Democrat from Virginia, the AUMF explicitly authorizes military actions against al Qaeda, the Taliban, and ISIS, as well as “associated persons or forces, that are engaged in hostilities against the United States, the Armed Forces, or its other personnel.” (A similar bill AUMF explicitly focused on these three terror groups was introduced in the House by Republican Republican Rep. Jim Banks of Indiana in March.)

In the process, the legislation would repeal the 2001 AUMF and 2002 Iraq War Resolution, replacing them as the legal foundation for America’s war on terror.

“We’ve heard repeatedly from our nation’s military leaders that passing an AUMF would send an important signal of support to the troops and that we must continue to dismantle terrorist organizations in a more systematic manner,” said Kaine in a statement. “Most members of Congress were not yet elected when the debate and vote on the 2001 AUMF took place and it is time for this Congress to fulfill its duty by putting its stamp on the current fight and to reaffirm its commitment to defeating ISIS, Al-Qaeda, and the Taliban.”

In contrast to the the 2001 AUMF passed in the days after 9/11, which gave the Department of Defense wide-ranging authorization to “prevent any future acts of international terrorism against the United States by such nations, organizations or persons,” Flake and Kaine’s AUMF would establish an oversight system by which Congress would evaluate not only which terror groups are actually considered “associated,” but in which countries military action can actually take place and for how long.

The new legislation requires the executive branch to seek authorization from Congress when launching military operations in foreign countries not explicitly named in the AUMF as havens for those terror groups — countries beyond Afghanistan, Iraq, Syria, Somalia, Libya, or Yemen — a clause that would preclude the president from launching unilateral drone strikes or special operations raids against targets in, say, Pakistan or the Philippines without consulting lawmakers first. Additionally, the new AUMF would expire after five years without reauthorization by Congress.

The hope, according to the two senators, is that the new legislation will limit the size and scope of military activities around the world and bring an end to an age of perpetual war that’s left both American lawmakers and citizens wary of prolonged conflicts abroad.

Sens. Tim Kaine and Jeff Flake introduced a new Authorization for the Use of Military Force (AUMF) on May 25 to define the size and scope of the U.S.'s ongoing global war on terror.Photo by Task & Purpose/Associated Press

“When I voted in 2001 to authorize military force against the perpetrators of the September 11th attacks, I had no idea I would be authorizing armed conflict for more than fifteen years, and counting,” Flake said in a statement.

“We owe it to the American public to define the scope of the U.S. mission against terrorist organizations, including ISIS, and we owe it to our troops to show we’re behind them in their mission,” said Kaine. “It’s our constitutional duty in Congress to authorize military action, yet we’ve stood silent as Administrations have stretched the 2001 AUMF far beyond its original purpose.”

The debate around a new AUMF has been swirling in recent years with the rise of ISIS. In 2014, the Obama administration claimed that both the 2001 AUMF and Congress’ 2002 Iraq War Resolution provided all the legal basis he needed to initiate Operation Inherent Resolve against ISIS, despite the fact that the group didn’t even exist when those piece of legislation were drafted more than 15 years ago. (In December 2016, the outgoing Obama administration argued that “the 2001 AUMF has authorized the use of force against the group now called ISIL since at least 2004.”)

In recent years, lawmakers have sought to reassert its Congress’ constitutional authority in the war-making process. In 2014, an amendment to the National Defense Authorization Act that would have sunset the 2001 AUMF died in the House; a similar amendment passed the House in 2016 but failed to make headway in the Senate. And Flake and Kaine previously introduced an AUMF as an amendment to a State Department reauthorization bill in 2015, 10 months after the start of Operation Inherent Resolve.

“Our military has been waging war against ISIL since last September, and Congress has been appropriating funds to pay for those operations,” said Flake at the time. “It's past time for Congress to formally voice its support of the mission itself.”

Outside an AUMF pertaining to global terrorism, there have been other efforts to reign in the president's war-making power. In 2014, Kaine and Republican Sen. John McCain introduced bipartisan legislation to reform the War Powers Act of 1973, which gave the executive branch the power to wage war in the event of a national emergency or “specific statutory authorization” like the 2001 AUMF rather than the formal declaration of war that’s specified in the constitution.

“The Constitution gives the power to declare war to the Congress, but Congress has not formally declared war since June 1942, even though our nation has been involved in dozens of military actions of one scale or another since that time,” McCain said on the Senate floor at the time. “It is essential for the Congress and the president to work together to define a new war powers consultative arrangement that both reflects the nature of conflict in the 21st century and is in line with our Constitution.” The bill died in committee without a single vote.

But that was before the 2016 election triggered a seismic shift in Washington, and congressional sources told Task & Purpose they believe a new AUMF will likely garner more bipartisan support than previous attempts to reign in the war on terror. And while the legislation has a long road ahead before it reaches President Donald Trump’s desk — markup in the Senate Foreign Relation Committee, a vote on the Senate floor (which doomed the 2015 AUMF), and another round of amendments and votes in the House — the feeling on the Hill is that the recent U.S. airstrikes in Syria have put a real spotlight on the way the United States goes to war.

“The crux of it is is that it’s a starting place,” as one Democratic staffer put it. “There will be a long debate and a long conversation about why and how we use force, and the whole point of is that there hasn’t been one in the past.”