"I can say that she did die doing what she loved" 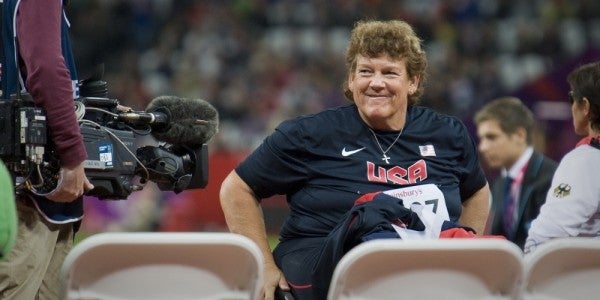 Marine veteran Angela Madsen, who won the bronze medal in shot put at the 2012 Summer Paralympics in London, has died while trying to row solo across the Pacific, her wife Debra announced on Facebook.

Madsen had not responded to text messages on Sunday after indicating the day before she was going into the water to make repairs to her boat Row of Life, Debra Madsen wrote.

An aircraft dispatched by the Coast Guard later saw Madsen floating apparently lifeless in the water while tethered to her boat, Debra Madsen wrote. A cargo ship recovered her body on Monday and is taking Madsen to Tahiti.

“Angela was living her dream,” her wife wrote. “She loved being on the water as you could see from the photos she sent.”

Madsen was 60 days and roughly 1,300 miles into her solo trip from Los Angeles to Honolulu at the time of her death, according to the United States Olympic & Paralympic Committee.

She had previously rowed across the Atlantic Ocean twice and completed in javelin and shot put at the 2016 Summer Paralympics in Rio de Janeiro.

Madsen enlisted in the Marine Corps in 1979 after finishing high school and became a military police officer stationed at Marine Corps Air Station El Toro in California, Madsen wrote for Time magazine in 2014. She also played center on the All-Marine women’s basketball team.

“During one game, somebody tripped me and someone else landed feet first on my lower back during a game,” Madsen wrote. “That ruptured two discs in my lumbar spine, ending my military career. A botched surgery paralyzed me from the waist down.”

Following that 1993 injury, Madsen became homeless until she was able to get help through Disabled American Veterans, she wrote. As she rediscovered her passion for sports, she found that she was a natural at rowing, which she particularly enjoyed because she didn’t have to sit in a wheelchair while doing it.

During a 60-day row from Long Beach, California, to Oahu, Madsen and her partner “listened to a lot of the Frozen soundtrack and half of the Fifty Shades of Grey audiobook to pass the time,” Madsen wrote in the Time magazine article.

Retired Marine Maj. Nico Marcolongo of the Challenged Athletes Foundation described Madsen as an “example of the human spirit and what one can accomplish when one puts their mind to it.”

Marcolongo had known Madsen by reputation long before he first met her last year in California, he told Task & Purpose on Tuesday. His organization supported her latest effort to row across the Pacific.

“It was tragic to hear that news,” he said. “To be a fellow a Marine, it was a little extra saddening for me. I can say that she did die doing what she loved.”