The only person charged in the murder of Spc. Vanessa Guillen is trying to get the case tossed out

The hearing for the motion to dismiss is on Dec. 8. 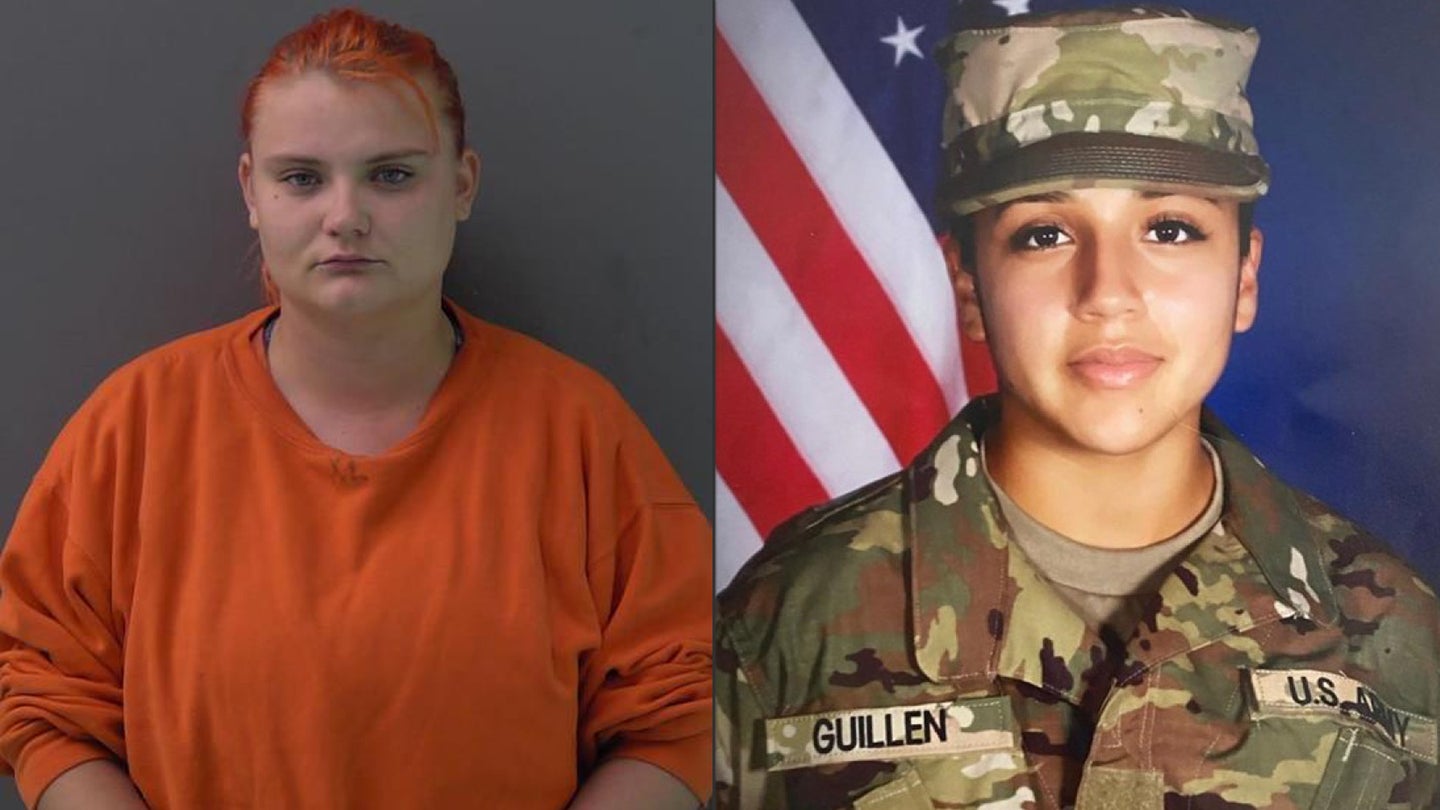 The only person charged in connection with the murder of Army Spc. Vanessa Guillén at Fort Hood, Texas, last year is trying to get the charges thrown out.

Cecily Aguilar, the girlfriend of the soldier accused of  killing Guillén in April 2020, was arrested in July last year. Prosecutors say she allegedly helped Spc. Aaron Robinson dismember Guillén’s body on the evening of April 22, and then later lied about her and Robinson’s whereabouts to authorities. Robinson died by suicide on the evening of June 30 as authorities closed in on him.

Aguilar was charged almost three months after Guillén’s death, and is the only person charged in connection with the soldier’s murder. Guillén’s death was a catalyst for change in the Army’s sexual assault and harassment response and prevention program, criminal investigation division, and at Fort Hood itself. In July 2020, Aguilar pleaded not guilty to the charges against her.

Aguilar allegedly told investigators that on April 22, Robinson told her he’d “struck a female soldier in the head with a hammer multiple times” in an arms room at Fort Hood. Robinson allegedly drove Guillén’s remains to an area near a river close to the Texas base, unloaded the remains, and went back to pick Aguilar up at the gas station where she worked, according to court documents. Robinson took Aguilar out to the river and showed her Guillén’s remains, and Aguilar allegedly told investigators that she and Robinson dismembered the young soldier’s body. After first attempting and failing to burn the remains, they then decided to bury the body in “three separate holes,” court documents said.

Four days later on April 26, Aguilar and Robinson allegedly returned to the crude burial site, dug up Guillén’s body, and continued trying to break the remains down. Aguilar allegedly told investigators all of this the night Robinson fled Fort Hood. Investigators had Aguilar call Robinson who “never denied anything,” court records said.

That night, after authorities tracked Robinson through Aguilar’s phone calls with him. Robinson shot himself in Killeen as police moved in to make an arrest.

In July 2020, Aguilar was charged with one count of conspiring with Robinson to dispose of Guillén’s body, and two counts of attempting to dispose of her body. Aguilar’s attorneys unsuccessfully tried to have her confession thrown out last year, arguing that she wasn’t advised of her Miranda rights ahead of an interrogation by authorities. Now her defense is pushing to have a series of charges from a second indictment against Aguilar dropped.

Aguilar’s defense argues that the charges in the second indictment aren’t specific enough and cite many of the same issues in multiple counts. The “lack of specificity causes the charges to be unconstitutionally vague,” their argument says. “And raises the risk of multiple trials against Ms. Aguilar for the same conduct.”

Aguilar’s attorneys also take issue with allegations that Aguilar altered, destroyed, or mutilated, and concealed “any record, document, and other object,” referring to Guillén’s body. They say that since “the term ‘record, document, and other object’ does not include a human body,” the counts should be dismissed. The same argument is used against charges that Aguilar attempted to destroy or conceal information in Aaron Robinson’s Google account with the intent to obstruct or influence the investigation.

Information in a Google account “is neither ‘tangible,’ nor a ‘record, document, or object,’” Aguilar’s attorneys argue.

Lastly, the defense team argues that nine of the 11 counts be dismissed because they allege the same misconduct multiple times. The prosecution “basically alleged two crimes,” the argument says: that Aguilar helped Robinson dispose of Guillén’s body, and that she lied about her and Robinson’s whereabouts on the night that they disposed of the body.

“Instead of charging one count of accessory to murder and one count of making a false statement, the Government filed a three-count initial indictment and an eleven-count superseding indictment, alleging the same misconduct over and over again, sometimes under statutes addressing corporate document shredding,” Aguilar’s argument says.

According to Guy Womack, a military defense attorney and legal expert, it’s not uncommon for defense teams to file these types of motions, but cases are unlikely to be dismissed because of them. Typically, he said, the court would ask prosecutors to use more specific language in their charges against the defendant. As for the argument regarding using the same charges multiple times, Womack said that is typically done because the prosecution essentially wants to cover its bases and give a jury options for what they would hold against the defendant.

Nevertheless, Aguilar’s argument will be heard in a court hearing scheduled for Dec. 8.