The Pentagon is making COVID-19 vaccines mandatory for US troops 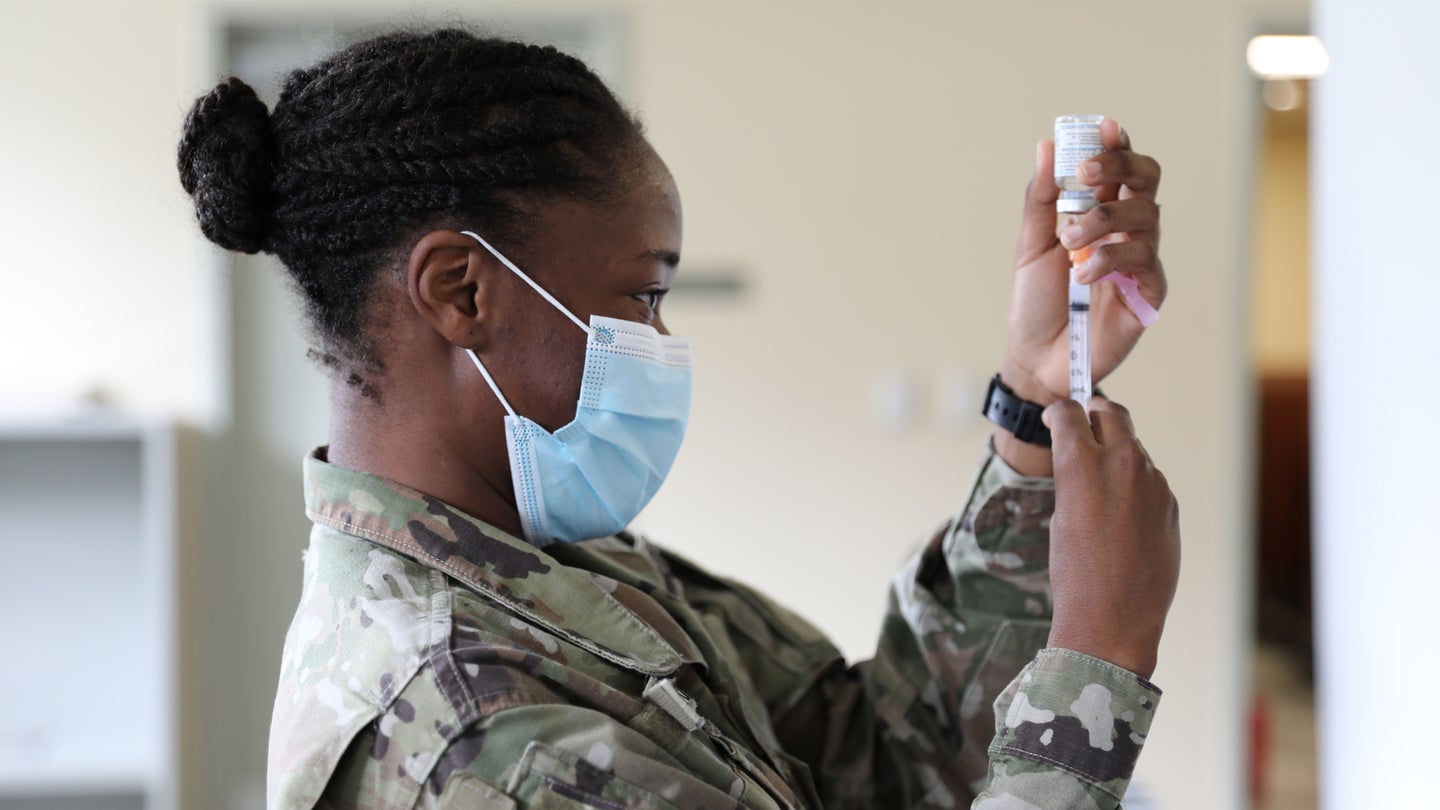 Defense Secretary Lloyd Austin will ask for President Joe Biden’s approval by mid-September to make the COVID-19 vaccines mandatory, Austin wrote in a memo to troops released on Monday.

If the U.S. Food and Drug Administration fully approves one of COVID-19 vaccines before then, Austin will move forward with making it mandatory, he wrote.

“The intervening few weeks will be spent preparing for this transition,” Austin wrote. “I have every confidence that Service leadership and your commanders will implement this new vaccination program with professionalism, skill, and compassion. We will have more to say about this as implementation plans are fully developed.”

Associated Press reporter Lolita Baldor first revealed on Monday that Austin would ask for a waiver from President Biden, which is necessary because the FDA has only approved the COVID-19 vaccines for emergency use so far.

“Being vaccinated will enable our service members to stay healthy, to better protect their families, and to ensure that our force is ready to operate anywhere in the world,” Biden said. “We cannot let up in the fight against COVID-19, especially with the Delta variant spreading rapidly through unvaccinated populations.”

The move comes as the Delta variant of COVID-19 is roaring like a wildfire through states where few Americans are vaccinated, threatening to reverse much of the progress in reducing the number of new infections since three vaccines became widely available this year.

As of Thursday, more than 72% of the counties in the United States had a “high” rate of COVID-19 transmission and another 16.5% of counties had a “substantial” disease transmission rate, according to the U.S. Centers for Disease Control and Prevention.

As of July, more than 99% of Americans who were dying from COVID-19 had not been vaccinated, Dr. Anthony Fauci, director of the National Institute of Allergy and Infectious Diseases, said on NBC’s “Meet the Press.”

However, the COVID-19 vaccines have proven to be more controversial than other inoculations in part because of a strong feeling among conservatives that the U.S. government should not force people to get vaccinated.

But an increasing number of prominent Republicans are urging Americans to get vaccinated for COVID-19, including former Vice President Mike Pence.

“I got the shot,” Pence reportedly said on Thursday at a conservative youth conference in Houston. “My family got the shot. And I want to encourage anyone here who hasn’t gotten the shot who’s eligible to go get it. And if you’re not sure about it, go ask your doctor and get the very best advice that you can.”

Currently, troops can refuse to get inoculated for COVID-19 because the FDA gas only approved the vaccines for emergency use.

In order to make the vaccines mandatory before they are fully approved by the FDA, the Pentagon needs to secure a waiver from President Biden.

On July 30, Biden announced mandatory COVID-19 vaccinations for federal employees and ordered the Defense Department to come up with a plan to require all service members to get vaccinated. The president also said he expected the FDA to grant full approval to COVID-19 vaccines in early fall.

Austin’s announcement officially ends the Defense Department’s policy of allowing troops to decide for themselves whether they wanted to be vaccinated for COVID-19. The military’s vaccination effort thus far has shown mixed results because service members have fallen victim to misinformation about the available vaccines; they’ve had concerns about past instances when troops were intentionally exposed to toxic substances; and some troops just wanted to be able to say no to their superiors.

“This is the first time I get to tell the Army NO!” was among more than a dozen reasons given for opting out of the vaccines by soldiers at Fort Carson in Colorado.

For the active-duty force: Roughly 75% of sailors are fully vaccinated for the novel coronavirus (COVID-19), compared with more than 62% of soldiers, about 61% of airmen and Space Force Guardians; and 59% of Marines, service officials said.

Some of the possible reasons why the Navy might be so far ahead of the other services include the fact that fully vaccinated sailors currently do not have to be in quarantine for two weeks prior to deploying; they have more freedom to leave the ship during port visits when conditions permit; and the COVID-19 outbreak aboard the aircraft carrier USS Theodore Roosevelt last year showed how quickly the disease can spread in the shared living spaces aboard warships.

The Navy is still ahead of the other services when you include the number of reserve component sailors that have been fully vaccinated. A total of 70% of active-duty and Navy Reserve sailors are fully vaccinated, said Navy spokeswoman Lt. Cmdr. Patricia Kreuzberger.

That compares with 57% of all active-duty, National Guard, and Reserve airmen and Guardians, according to the Air Force’s website.

The other military branches track data for reserve component service members differently, making it impossible to do an apples-to-apples comparison.

Only 21% of Marine Reservists have been fully vaccinated, according to the Marine Corps. An Army spokeswoman referred questions about how many reserve component troops have been vaccinated to the Army National Guard and Army Reserve.

The National Guard Bureau has no data on how many Army or Air Force guardsmen have been vaccinated, and a spokesman for the Army Reserve referred questions on the matter back to Army public affairs, which had no additional information to share.

The Defense Department has already mandated 17 other vaccines for troops to prevent diseases including Polio, Typhoid, and Yellow Fever. It is unlikely that a service member would receive all 17 vaccinations because each combatant command has its own vaccine requirements, said Pentagon spokeswoman Lisa Lawrence.

Service members told Military Times that they were also concerned at how quickly the COVID-19 vaccines were developed, and one Air Force technical sergeant said that he and his co-workers did not want to be used as “guinea pigs.”

Troops may also be mistrustful of getting vaccinated for COVID-19 based on the military’s past medical missteps. For years, the Defense Department gave troops Mefloquine as an anti-Malaria medication, but in 2013 the military made it the drug of last resort after the FDA warned it could cause brain damage.

Between 1998 and 2004, hundreds of U.S. troops refused to take the required anthrax vaccine, many of whom were either forced out or disciplined as a result, in part because they were worried about possible side effects.

The Defense Department required troops to receive a vaccine for anthrax that proved to be “ineffective, completely unnecessary and, at times, unsafe,” said Zaid, who also represented Task & Purpose in a Freedom of Information Act lawsuit to force the Navy to release emails to and from the Theodore Roosevelt’s captain during last year’s COVID-19 outbreak aboard the ship.

“On the flip side, here we have a [COVID-19] vaccine specifically designed to combat an existing pandemic and the failure to receive it could have immediate and deadly consequences,” Zaid said. “The two situations are the polar opposite of each other.”

UPDATE: This story was updated to clarify that Defense Secretary Austin will request a waiver by Sept. 15 to make COVID-19 vaccines mandatory.