While the candidates rarely talk about national security issues, we want to drill down on the specifics of how they would address the biggest challenges facing troops, veterans, and military families 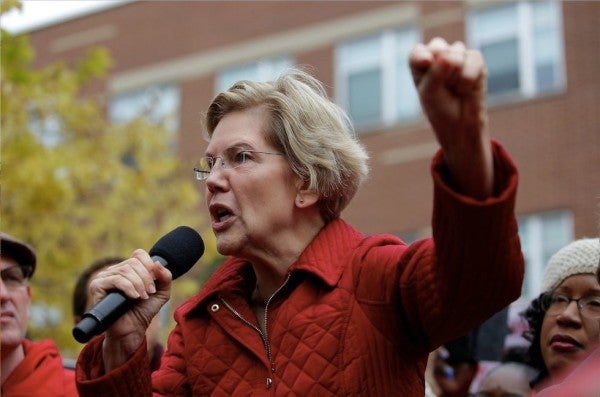 Editor's note: Task & Purpose is determined to provide readers with the most detailed information possible about how the Democrats running for president would serve as commander in chief if elected.

While the candidates rarely talk about national security issues, we want to drill down on the specifics of how they would address the biggest challenges facing troops, veterans, and military families.

Below, Sen. Elizabeth Warren (D-Mass.) answers questions from Pentagon correspondent Jeff Schogol about Iran, the F-35, and whether defense spending would conflict with her plans to expand entitlement programs, such as Medicare.

Task & Purpose: Would you ask Congress for a declaration of war before launching attacks against Iran?

Sen. Elizabeth Warren: Yes. If a president believes that military action is necessary, that president should seek congressional authorization and persuade the American people of the reasons, the strategy, our goals, and the plans to achieve them.

Donald Trump campaigned on bringing our troops home, but instead he has pushed us to the brink of yet another war in the Middle East. He ripped up an Iran nuclear deal that was working. He's repeatedly escalated tensions. Now he's assassinated a senior foreign military official. His actions put every service member and diplomat in the region at risk and make us less safe.

Trump has been marching toward war since his first days in office—but the American people won't stand for it. I'll fight to prevent a conflict with Iran and another war in the Middle East.

If you were elected president, would you withdraw all U.S. troops from Syria and Iraq and Afghanistan regardless of conditions on the ground? If you would leave a residual counter-terrorism force in Afghanistan, how large would it be and how would the U.S. military provide logistical and close air support for troops on the ground?

For nearly two decades, America has been mired in a series of wars in the Middle East and beyond, with increasingly diminishing returns to our own security. These wars have taken a staggering human and economic toll. A singular focus on counterterrorism has dangerously distorted U.S. policies. And we are less, not more, secure as a result. It's time to end American military involvement in conflicts in the Middle East and bring our troops home in smart, responsible ways — starting immediately.

Ending our military interventions does not mean abandoning the region or our partners and interests there. We should lead international efforts to provide the humanitarian and economic aid that is essential to stabilizing Syria, Afghanistan, and other conflict areas over the longer term.

We should renew efforts to forge diplomatic solutions that achieve our counterterrorism objectives, including a sustainable political settlement between the Afghan government and the Taliban. We should refocus on intelligence efforts, law enforcement, and international partnerships to prevent terrorist attacks against the United States, whether they originate from home or abroad. We should redouble efforts to promote the rule of law, combat corruption, and ensure basic rights. And to achieve all this, we will need to rebuild our alliances in Europe, Asia, and beyond, updating them to address the real challenges of our time.

When military leaders talk about why the need the F-35, their underlying message is that more pilots will die if the U.S. military sends older aircraft against the latest air defense systems. Are you willing to put pilots at greater risk to cut defense spending?

The unfortunate truth is that the F-35 remains far from what was promised on paper. Pentagon officials have acknowledged that, eighteen years after development began, it still possesses deficiencies that could cause death, aircraft loss, or underperformance in combat.

We have arrived at this point because too much of our defense spending is driven by failure to prioritize, the inertia of struggling weapons programs, and privileging special interests over American security. In other words, our broken procurement system could put our pilots at risk well before they reach the fight. This is not sustainable. We must ensure that the investments we make in our defense can actually deliver as promised — and smart defense spending and scrutiny of struggling weapons programs will only make our military stronger.

You have said the Pentagon needs to focus on 21st century challenges. The Defense Department believes that means preparing to defeat China and Russia in major wars. Do you agree?

Both China and Russia have invested heavily in their militaries and other tools of national power. Both hope to shape spheres of influence in their own image and ultimately remake the global order to suit their own priorities. But confronting this challenge is not solely or even primarily a question of military competition. China uses its economic might to bludgeon its way on the world stage, for instance, while Russia has prioritized opportunistic harassment and covert attacks. And beyond China and Russia, we face challenges, such as cyberattacks and nuclear proliferation that require much more than a strong military to combat. Others challenges, like climate change, cannot be solved through military action at all.

Addressing these challenges requires prioritization. That starts with cutting our bloated defense budget – identifying which programs actually benefit American security and which merely line the pockets of defense contractors. It also requires us to reinvest in diplomacy and other tools of national power — because funding a muscular military without robust diplomacy, economic statecraft, support for civil society, and development assistance only hamstrings American national power and undercuts any military gains.

Lastly, with American power increasingly challenged from within and without, we can no longer afford to think of our domestic agenda as separate from our foreign policy. Investments at home strengthen the economy, but they also serve our national security. A stronger economy, a healthier democracy, and a united people — these are the engines that power our country, and these are the investments that will project American strength and values in the world well into the 21st century.

As president, how would you ensure that the Department of Veterans Affairs approves disability claims for troops suffering from cancer and other serious ailments due to their exposure to toxins from burn pits and dangerous chemicals?

The prevalence of certain rare cancers has been increasing steadily among military personnel and veterans who have served overseas. It took years for Vietnam veterans to receive treatment for exposure to Agent Orange — some, including Blue Water Navy veterans, are still fighting for healthcare and benefits — and some veterans of more recent wars attribute their illness to exposure to toxic burn pits used by the military to dispose of waste.

As president, I will ensure that DOD tracks and records potential toxic exposure by integrating it into the post-deployment checklist. We need to ensure that adequate funding is allocated to research diseases that may be connected to certain kinds of exposure. And we must treat those affected without delay — we cannot allow today's veterans to wait for earned health care.

Do you support allowing veterans to use marijuana to treat their PTSD?

I support legalizing marijuana and erasing past convictions. I have also co-sponsored legislation to study the use of medical cannabis to treat veterans as an alternative to opioids, because we need to pursue all evidence-based opportunities for treatment and response.

President Obama was criticized for having the National Security Council make decisions that traditionally fell to the Pentagon. Would your NSC have more power than the Defense Department?

U.S. national security depends on a well-balanced national security apparatus: a qualified National Security Council staff capable of coordinating complex strategies and responses; a Defense Department able to deter adversaries, reassure allies, and generate sustainable options and capabilities for the real challenges of our time; a larger, and revitalized State Department; a trusted intelligence community exempt from political manipulation; trade and economic institutions that address corruption and are capable of delivering for the middle class; and a robust development and assistance enterprise.

President Trump has undermined each of these institutions through a toxic combination of malice and neglect. My administration will recognize and invest in the full range of tools and personnel our national security relies on, empowering them for success.

What steps would you take as commander in chief to ensure that the U.S. military properly investigated and – where necessary – prosecuted sexual assault cases?

I support Senator [Kirsten] Gillibrand's effort to remove cases of sexual assault from the chain of command and place trained prosecutors in charge instead. We need to reform the military justice system so that the lawyers and judges trying cases have the necessary experience and expertise, and so that every victim of a sexually-based crime benefits from a competent, empowered advocate from the very first day they report.

Do you believe that the Pentagon's budget is a threat to entitlements, such as Social Security?

I absolutely will not cut entitlements – in fact, I have a plan to increase Social Security benefits by $200 a month for every beneficiary and to extend the solvency of the program by decades, all by asking the top 2% to contribute a bit more.

We need a strong military to protect our interests, with funding set at sustainable levels. But if more money for the Pentagon could solve our security challenges, we would have solved them by now. The Pentagon budget will cost more this year than everything else in the discretionary budget put together. That's wrong, and it's unsustainable.