"On behalf of the entire nation, our great U.S.A., our incredibly United States of America, we are forever grateful for your life of service and your outstanding courage." 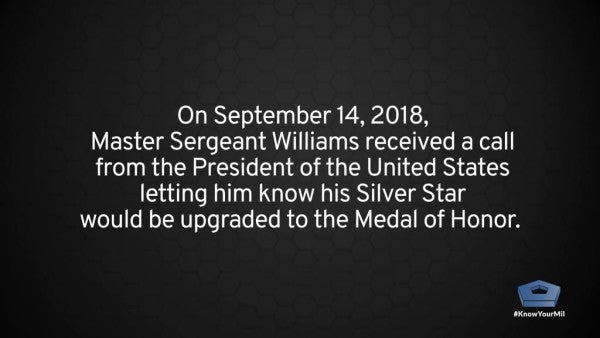 Master Sgt. Matthew Williams was presented with the Medal of Honor in a ceremony at the White House on Wednesday, as President Donald Trump recognized his “incredible heroism” in battle.

“Matt, we salute your unyielding service, your unbreakable resolve, and your untiring devotion to our great nation and the nation that we all love. Your spirit keeps our flag waving high, our families safe at home, and our hearts beating with American pride,” President Trump said. “On behalf of the entire nation, our great U.S.A., our incredible United States of America, we are forever grateful for your life of service and your outstanding courage.”

Williams repeatedly put himself in the enemy's crosshairs during a hellacious mountainside firefight in Afghanistan to help his team in April 2008, and previously received the Silver Star for it. He was serving with the Special Forces Operational Detachment Alpha (ODA) 3336, Special Operations Task Force-33 at the time.

He told reporters on Tuesday that he remembers the day he found out his Silver Star was being upgraded because Fort Bragg was preparing for Hurricane Florence to hit — and just after the phone call, they lost power because of the storm.

He said that he was sitting in his truck in the driveway waiting for the call, still a little uncertain about what exactly was going on, but when his phone range and he picked up, a woman on the other end asked him to “please hold for the President.”

“I was like, 'Oh okay, this is where this is going I guess,'” he said. “My wife Kate was actually in the garage working out, and I texted her and was like, 'Hey get in the truck'…and she continued working out. So she finally listened to me and came and got in the truck at the very end of the phone call, and heard the President kind of closing up. She was a little bit confused as to what was going on too, so she was like, 'What just happened?' And I told her and she got extremely emotional … that was when it really kind of sunk in, seeing her emotion was a little overwhelming for me too, and that kind of really made me understand what had just taken place.”

Wiliams is the second soldier from the 3rd Special Forces Group to receive the Medal of Honor for this operation.

The picture that Williams' battle buddies painted for reporters on Tuesday had Williams moving expertly from one place to another, across a mountainside, during the entire almost-seven-hour showdown between U.S. and Afghan commando forces, and the enemy. He was helping evacuate casualties; he was grabbing commandos and instructing them to lay down fire; at one point he “magically appeared” — ODA 3336's commander at the time, Lt. Col. Kyle Walton told Task & Purpose — and fixed a broken radio.

And at the end of the harrowing battle, not a single U.S. service member had been killed.

“The enemy really held a high ground, superior numbers, and an element of surprise — they had it all going,” Trump said. “But they had one major disadvantage: They were facing the toughest, strongest, and best trained soldiers anywhere in the world.”