Soldiers with the 173rd Airborne Brigade are reportedly deploying to the Middle East as part of an ongoing buildup in preparation for increased Iranian aggression in the region. 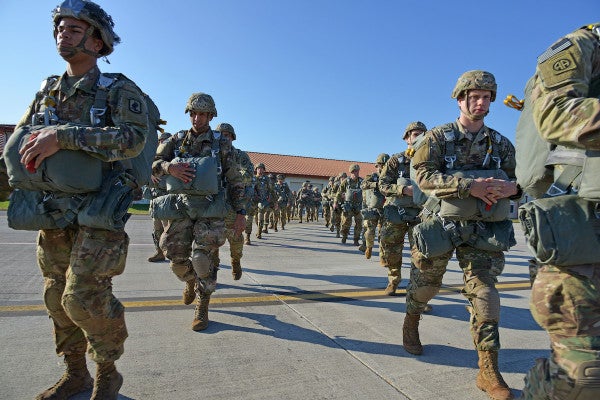 Soldiers with the 173rd Airborne Brigade Combat Team are deploying to the Middle East as part of an ongoing buildup in preparation for increased Iranian aggression in the region.

Army Col. Joe Scrocca, spokesman for U.S. Army Europe, confirmed to Task & Purpose that “elements of the 173rd Airborne Brigade deployed to … bolster security, for force protection, and to be prepared for any contingency.”

Maj. Chris Bradley, brigade spokesman, first told Stars and Stripes that troops from the brigade were “deploying to posture to defend U.S. personnel and property as directed.” The 173rd ABCT is a rapid response force based in Vicenza, Italy. They will join thousands of troops who have already deployed, or are preparing to do so, including:

A spokeswoman for U.S. Central Command declined to provide Task & Purpose with a complete list of U.S. military units are deploying to the region in case Iran launches retaliates for the death of Maj. Gen. Qasem Soleimani, the former head of the Islamic Guard Revolutionary Guard Corps's elite Quds Force.

“We aren't going to talk about forces flowing into or out of the U.S. Central Command AOR at this time,” said Army Maj. Beth Riordan.

As of now, the military buildup does not have an operational name, Riordan said.

Iran and its proxy forces in the Middle East have vowed to attack U.S. military personnel and bases as revenge for the U.S. airstrike that killed Soleimani on Friday.

Iraqi lawmakers voted on Sunday to expel U.S. troops from the country, but the resolution is non-binding, meaning the prime minister would need to take further steps to finalize the move.

Update: This article has been updated to include comments from U.S. Army Europe spokesman Col. Joe Scrocca.