"[T]ake some time to remember these three incredible Dogface Soldiers." 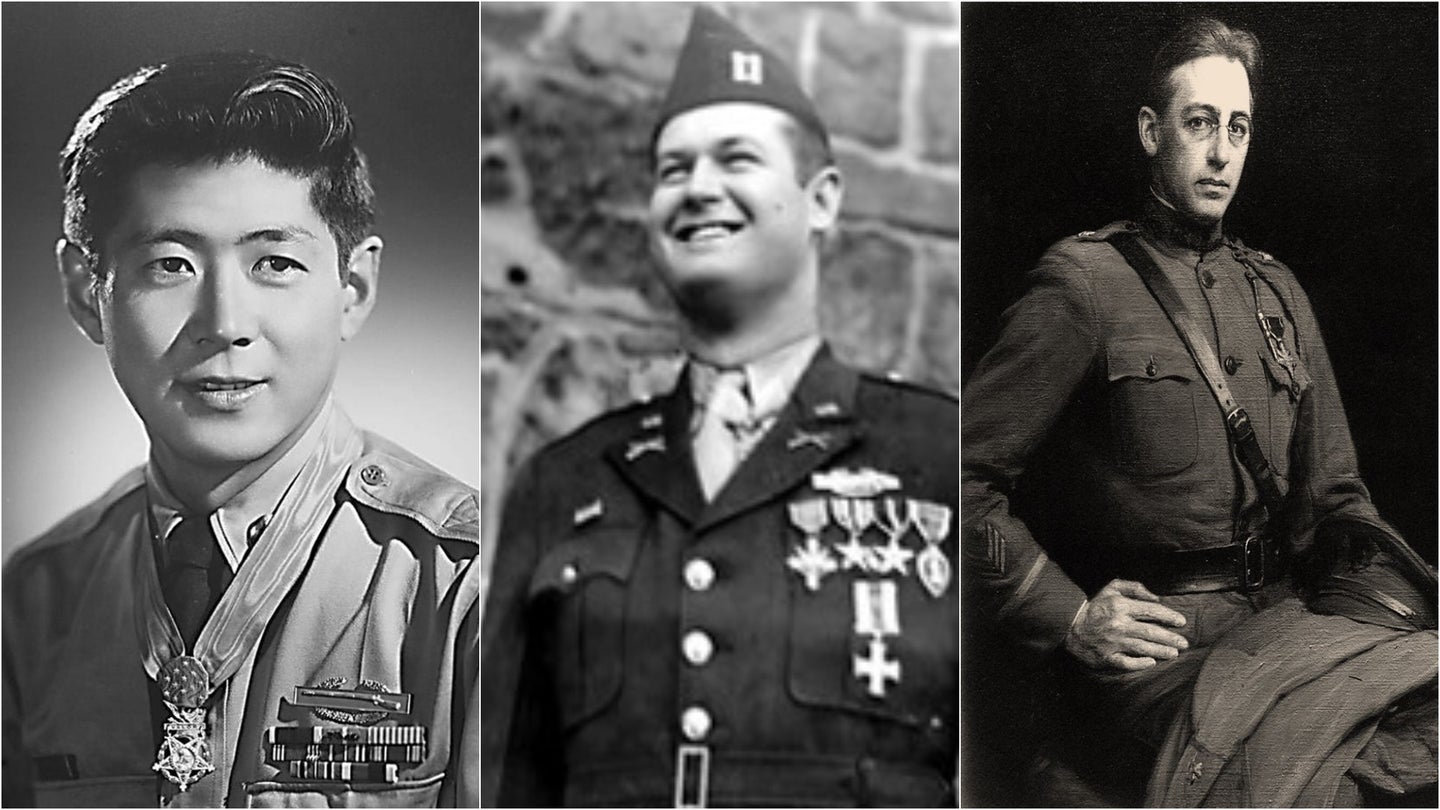 Three legendary war heroes who served with the 3rd Infantry Division in three different wars were recognized at Fort Stewart, Georgia, this week for their incredible bravery on the battlefield.

A dedication ceremony on Thursday named three gates to the Army installation after World War I veteran Capt. Jesse Wooldridge, a Distinguished Service Cross recipient, and Medal of Honor recipients Capt. Maurice “Footsie” Britt, who served in World War II, and Cpl. Hiroshi H. “Hershey” Miyamura, who served in the Korean War. All three soldiers served with the 3rd Infantry Division, which is based at Fort Stewart.

“In the future, as you drive in Wooldridge, Britt or Miyamura Gates, take some time to remember these three incredible Dogface Soldiers,” Maj. Gen. Charles Costanza, commander of the 3rd ID, said at the ceremony. “Think about what selfless service is truly all about and what service to our nation means.”

Capt. Wooldridge is remembered for leading a counterattack on German forces that vastly outnumbered him and his troops. Despite having fewer than 200 soldiers in Wooldridge’s Golf Company of the 38th Infantry Regiment, he and his soldiers killed, wounded, or captured more than 1,000 German soldiers. Of the 189 soldiers Wooldridge led in the counterattack, 51 of them returned uninjured; Wooldridge himself was shot in the back and chest, and was wounded in the neck by a bayonet.

He was awarded the Distinguished Service Cross, the Army’s second-highest award for extraordinary heroism in combat.

Years later during World War II, Capt. Britt, who served with Lima Company, 3rd Battalion, 30th Infantry Regiment, received the Silver Star and the Medal of Honor for “extraordinary actions” against the enemy in Mignano, Italy. On the morning of Nov. 10, 1943, then-Lt. Britt led his soldiers in “repelling a bitter counterattack” by about 100 German soldiers, his Medal of Honor citation says. During the fight, Britt’s chest, face, and hands were “covered with grenade wounds,” he was shot in the side, and his canteen and field glasses “were shattered.”

Despite his wounds, Britt was responsible for killing at least five enemy soldiers and wounding an unknown number, taking out an enemy machine gun crew, and throwing 32 fragmentation grenades. Britt refused to receive medical attention until he was ordered by his battalion commander after the battle, the citation says.

“His bold, aggressive actions, utterly disregarding superior enemy numbers, resulted in capture of four Germans, two of them wounded, and enabled several captured Americans to escape,” the citation reads. “Lt. Britt’s undaunted courage and prowess in arms were largely responsible for repulsing a German counterattack which, if successful, would have isolated his battalion and destroyed his company.”

Cpl. Miyamura was serving with H Company, 2nd Battalion, 7th Infantry Regiment, 3rd Infantry Division when he received the Medal of Honor for heroic actions on April 24, 1951 in Taejon-Ni, Korea. After the enemy attacked the company’s position that night, Miyamura “unhesitatingly jumped from his shelter” with his bayonet, and fought in close hand-to-hand combat and killed at least 10 enemy soldiers. After the attack, he went back to his soldiers and helped administer first aid and directed their evacuation.

As the enemy launched another assault on American forces, Miyamura “manned his machine gun and delivered withering fire until his ammunition was expended,” according to his Medal of Honor citation. As he ordered his squad to withdraw, he stayed behind to make the machine gun inoperative and proceeded to fight through enemy forces with only his bayonet. He fought his way to another machine gun where he ordered his soldiers to fall back while he covered them. He killed more than 50 enemy soldiers before his ammunition ran out.

“He was fighting ferociously against an overwhelming number of enemy soldiers” when he was last seen, his citation says. He was taken prisoner, and remained a prisoner of war for over two years.

The three gate plaques have descriptions of their name sake’s heroism, ensuring that every soldier who drives through the Wooldridge, Miyamura, or Britt gates will be reminded of the sacrifice of the soldiers who came before them.