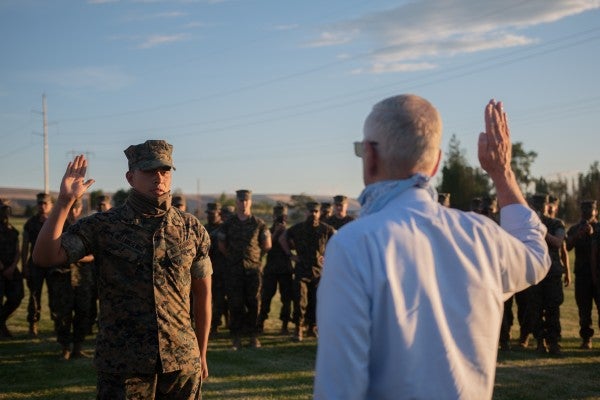 Mattis, 70, was on hand at an Aug. 18 deactivation ceremony for a Marine unit at the local National Guard training facility when one Marine corporal, Eduardo Bello-Resendiz, decided to leave the Corps after six years to reenlist into the Army National Guard, according to an Army National Guard public affairs story published on Sept. 4. The service requires no retraining for Marines in nearly 70 specialties through its Marine to Guard program.

The Marine reservist was part of Bravo Co., 4th Tank Battalion, a unit recently axed along with the rest of the Corps' tank units as part of a plan to reorient the service toward potential future fights with Russia or China.

It was at the deactivation ceremony that Bello-Resendiz learned of the Marine to Guard program, and decided to join that same day. Beforehand, the Marine's transition counselor approached the retired Marine general and asked if he wanted to administer the oath of enlistment, according to the story, and Mattis replied that “he would be honored as long as it was OK with the Marine.” (Mattis declined to comment to Task & Purpose).

It was indeed OK with the Marine.

“Cpl. Bello-Resendiz was shocked, excited, and almost speechless but finally managed to respond with, 'Are you serious? He is here? He said he would?'” said Sgt. 1st Class Stephen Vincent before responding, “Absolutely killer, do you want him to do the oath for you?”

The response was emphatic: “Hell yeah, of course!”

Mattis, a retired four-star general who served 44 years in the Marine Corps before being appointed as President Donald Trump's first secretary of defense in Jan. 2017, appeared at the ceremony in civilian attire, sunglasses, and a handkerchief around his neck for use as a face mask.

He was apparently on hand for the deactivation because of a personal connection: Mattis' brother was a former member, the Guard story said. Both now live back in their hometown of Richland, Wash., about an hour drive from Yakima.

Mattis has kept a low profile since resigning in protest of Trump's Syria policy in Dec. 2018. Though he authored resignation letter at the time, Mattis saved his most scathing critique of Trump until after the killing of George Floyd in Minneapolis, Minn., and the president's use of the military to rout peaceful protesters in Washington, D.C.

“Donald Trump is the first president in my lifetime who does not try to unite the American people — does not even pretend to try,” Mattis wrote in June. “Instead, he tries to divide us.”

Related: Your friendly neighbor Jim Mattis wants you to wear a face mask