Who did it better: the real Space Force recruiting spot or the trailer for Netflix’s ‘Space Force’?

This is probably the first time in history that the military is figuring out how to prop up a new branch while a major entertainment network sets out to make fun of it every step of the way. 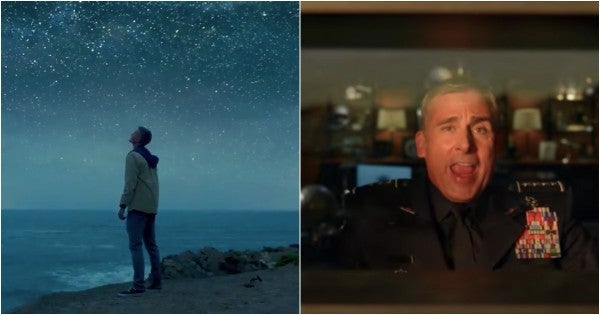 Like Batman and the Joker, or alcohol and hangovers, the real U.S. Space Force and the Netflix TV parody Space Force seem intertwined for life.

News of the upcoming TV show, which drops May 29, first circulated a mere month after the White House officially directed the Pentagon to create a Space Command. And just over a year later, the real Space Force revealed its new recruiting commercial just a day after Netflix released its first trailer for the TV show.

This is probably the first time in history that the military is figuring out how to prop up a new branch while a major entertainment network sets out to make fun of it every step of the way. So the question is: which advertisement for America’s military adventure in the final frontier did it better?

Let’s start with the recruiting spot, which we actually think is pretty great. Like Luke Skywalker staring at the sunset in Star Wars: A New Hope, it touches that familiar feeling of looking up at the stars and wondering what’s out there. It even has similar stirring string music in the background.

“Some people look to the stars and ask, what if?” says the narrator in the commercial, which starts out with the requisite ordinary-looking guy looking up at the night sky. “Our job is to have an answer … We have to imagine what will be imagined, plan for what’s possible, while it’s still impossible.”

Cue the shots of giant-ass rockets, neat-o data visuals and gee-whiz CGI spacecraft zipping past. The spot even shows off the super-secret X37B spy plane, which in October set a record by being in orbit for more than two years straight before returning to Earth.

As a lifelong sci-fi fan and onetime astronaut-wannabe, the trailer hit a bunch of my “let’s go to space” buttons. But would my day-to-day experience as a member of Space Force be like NASA pilot Joseph Cooper’s in Interstellar?

Probably not. In fact, it will probably be more like that of General Mark Naird (played by Steve Carell) in that other trailer we mentioned.

“As a scientist, you have a loyalty to reason. Makes you a little untrustworthy.” Naird says to Dr. Chan Kaifang in the trailer, which focuses on Naird’s heavily stress-inducing job of dealing with bureaucratic red tape, congressional inquiries, and failed test launches as he tries to build a branch that he never wanted to be in charge of in the first place.

After a prototype rocket blows up on the launchpad, Naird turns to another Space Force officer to ask about the cost.

“FUUUUUUUCK” is Naird's response, shortly before the general, on the verge of a nervous breakdown, takes a minute to sing the Beach Boys hit “Kokomo” to himself in his office.

Yep, that sounds a little more like day-to-day life in the military to me.

Tragedy and comedy, Platoon and Tropic Thunder, expectation and reality. These seem to be the two sides of the coin that Space Force and the U.S. Space Force happen to share.

But are they mutually exclusive? Absolutely not, since the realities of a bureaucracy can still be imbued with the lofty ideals of a recruiting commercial. It’ll just be a hell of a fun time watching the two of them play out.