5 Heart-Rending Images From The Attack On Pearl Harbor 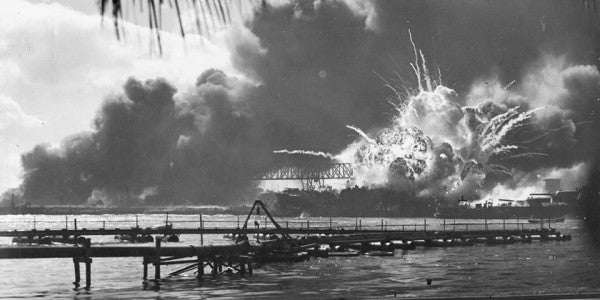 Three-quarters of a century later, the Dec. 7, 1941, attack on the U.S. Naval Base atPearl Harbor, Hawaii, remains a powerful and tragic moment in American history. The anniversary of the attack marks the deaths of more than 2,400 American service members, as well as a turning point in U.S. history.

At 7:48 a.m., two waves of aircraft — made up of bombers, fighters, and torpedo planes launched from Japanese aircraft carriers — began their surprise assault on the American military base.

In the aftermath of the attack, which lasted just two hours, more than 1,000 were wounded. Nearly 200 aircraft and 20 American naval vessels were destroyed, and many were critically damaged.

The day after the attack, President Franklin D. Roosevelt declared the attack “a date which will live in infamy,” calling for a formal declaration of war, which was approved by Congress within hours.

Here are five incredible photos from the attack on Pearl Harbor.

An aerial photograph taken by a Japanese pilot shows a Japanese bomber in the foreground as they attack the U.S. Naval Base at Pearl Harbor, Hawaii.

A photograph taken from a Japanese plane shortly after the beginning of the Pearl Harbor attack shows Japanese bombers torpedoing ships moored on the side of Ford Island, Hawaii. An explosion can be seen where a torpedo hit the USS West Virginia on the far side of Ford Island.

The USS Shaw explodes in a plume of fire and smoke during the attack on the U.S. Naval Base at Pearl Harbor, Hawaii.

On Dec. 8, 1941, the day after the attack on Pearl Harbor, a vendor in Times Square, New York City, sells newspapers with the headline “Japs Attack U.S. Hawaii, Philippines bombed by Airmen!”

During a memorial service to commemorate the more than 2,400 service members killed in the attack on Pearl Harbor, U.S. Navy sailors decorate the graves of fallen comrades.