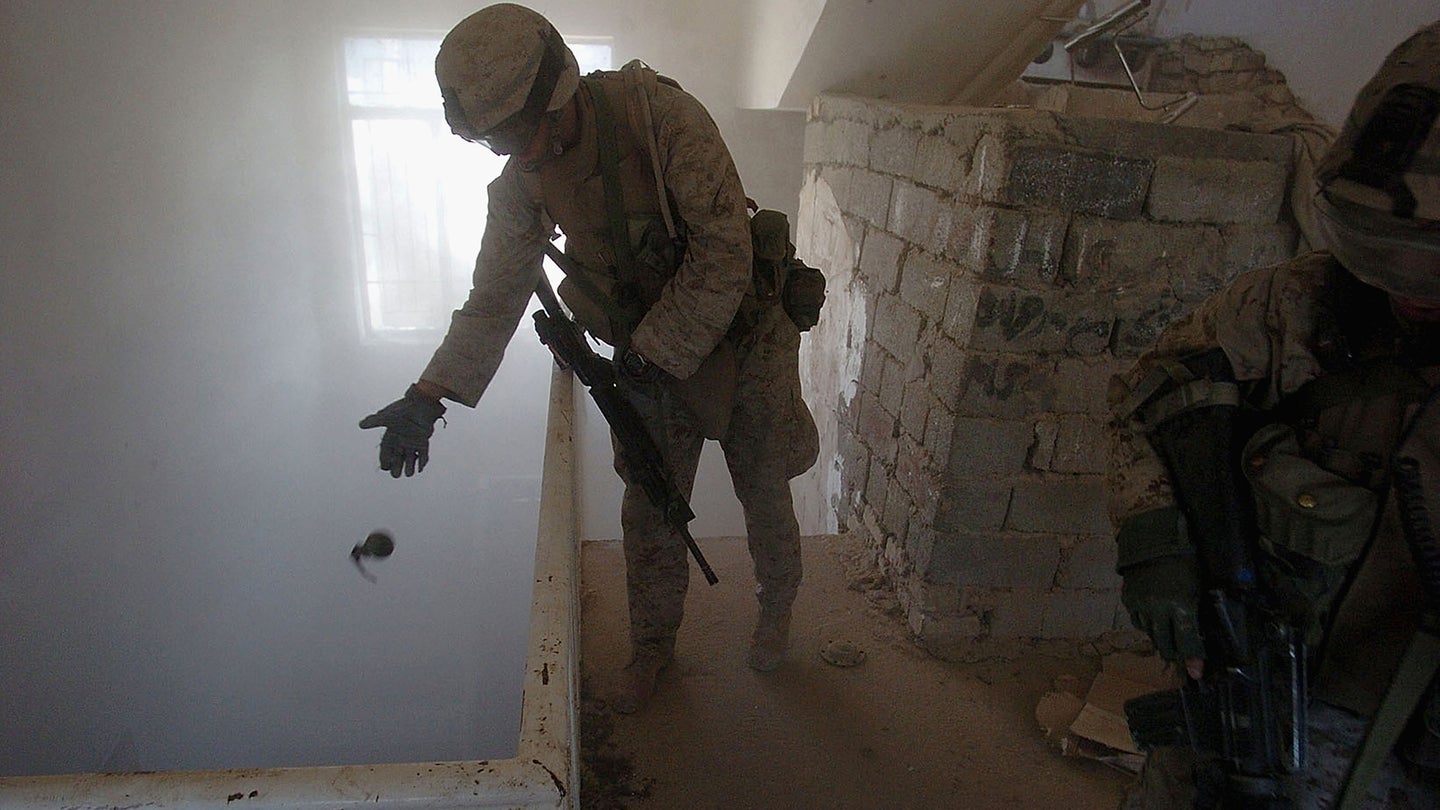 A US Marine drops a grenade down a stairwell to clear a lower floor of insurgents on November 25, 2004 in Fallujah, Iraq. (Scott Peterson/Getty Images).
SHARE

The Navy is honoring the Marines and other U.S. service members who fought in two of the most well-known battles of the Iraq war by naming a new America-class amphibious assault ship USS Fallujah, officials have announced.

Slated to be completed by 2029, USS Fallujah will commemorate both the first and second battles for the western Iraqi city in 2004: Operation Vigilant Resolve and Operation Phantom Fury.

The Fallujah will join other Navy warships named for famous battles in Marine Corps history, including USS Iwo Jima, Peleliu, and Hue City.

Navy Secretary Carlos Del Toro said it was an honor to commemorate the Marines, sailors, soldiers, and coalition partners who gave their lives during both battles for Fallujah.

“This namesake deserves to be in the pantheon of iconic Marine Corps battles and the LHA’s [amphibious assault ship’s] unique capabilities will serve as a stark reminder to everyone around the world of the bravery, courage, and commitment to freedom displayed by those who fought in the battle,” Del Toro said on Tuesday.

Retired Marine Gen. James Mattis, who led the 1st Marine Division during the first battle for Fallujah and was involved in planning the second battle for the city, told Task & Purpose that USS Fallujah is a worthy name for a Navy warship that takes Marines to their next fight.

Fallujah was “an emblematic fight” during the Iraq war, Mattis said on Wednesday. However, he cautioned against trying to rate how Fallujah ranks with past Marine Corps battles because each one is unique.

“For the Marine who’s pinned down in a firefight, that’s his Iwo Jima,” Mattis said. “The fact is it was a very hard-fought fight, and as usual — at cost to young men — we prevailed.”

Naming an amphibious assault ship for the Fallujah battles serves as a tribute to the troops who fought there and the Gold Star families who lost loved ones, and it also sends a message to Marines and sailors who will board the ship in the future, Mattis said.

“It’s a reminder to them that they’re not going to face anything worse than what Marines have faced in their past,” Mattis said. “And they’ll be able to overcome it themselves, but it’s going to be rough.”

Retired Navy Capt. Jerry Hendrix said he was happy that a warship will bear the name USS Fallujah. When he was the director of Naval History and Heritage Command several years ago, the Navy decided against naming a ship for the battle because the Iraq war was still ongoing.

“The fact that we’re doing it now is definitely well deserved in keeping with the traditions of the service that we would name ships after famous battles in which our Marines have participated,” Hendrix said on Wednesday. “So, I’m delighted.”

The first phase of the battle commenced after four Blackwater contractors were murdered in Fallujah on March 31, 2004. The I Marine Expeditionary Force was soon ordered to launch an offensive against insurgents in the city, but the operation was called off due to protests from Iraqi politicians. U.S. troops transferred security to an Iraqi unit, which fell apart and Fallujah came under the control of Al Qaeda.

Years later, Mattis said that the decision to halt the first attack on Fallujah was made for reasons “that had nothing to do with the tactical situation on the ground.”

“I was concerned to a degree if the Marines would lose confidence in their leadership because of it,” Mattis said in an October 2016 video. “They didn’t. I still recall a young SAW gunner being interviewed by a television crew, talking about how terrible he must feel that he was being ordered out of the city. He was a slow-talking Marine from down South. He just calmly looked into the camera and said: ‘Doesn’t matter. We’ll just hunt ‘em down somewhere else and kill ‘em.’”

The second phase of the battle for Fallujah lasted between Nov. 7 and Dec. 23, 2004, during which more than 100 coalition forces were killed and roughly 600 were wounded.

“Operation Phantom Fury is considered the bloodiest engagement of the Iraq War and the fiercest urban combat involving U.S. Marines since the Vietnam War’s Battle of Hue City,” a Navy news release says.

The second battle of Fallujah produced one of the most iconic images of the entire Iraq war when photographer Lucian Read, captured the moment when now-retired Marine Sgt. Maj. Bradley Kasal was coming out of a house while being supported by two other Marines. Kasal, who was severely wounded in the bitter fight, was later awarded the Navy Cross.

While Marines and other U.S. troops were able to take Fallujah, it was another three years before the tide of the Iraq war turned decisively against Al Qaeda. Army Capt. Travis Patriquin helped to develop a new strategy for how the U.S. military could deal with tribal leaders in Iraq’s western Anbar province that proved to be successful. Tragically, Patriquin was killed on Dec. 6, 2006, along with Marine Maj. Megan McClung when a roadside bomb destroyed their Humvee in Ramadi.

For many Americans, Fallujah will always be synonymous with the hard fighting that U.S. troops faced in Iraq. Both battles yielded numerous stories of heroism by American service members, such as Lance Cpl. Mike Hanks, who ran into a kill zone several times to rescue a wounded Marine and Iraq soldier. Hanks, who was killed on Nov. 17, 2004, was posthumously awarded the Silver Star for his bravery.

Fifteen years after Operation Phantom Fury, Army Staff Sgt. David Bellavia became the first living Iraq war veteran to be awarded the Medal of Honor for his bravery against insurgents in November 2004. He single-handedly killed five insurgents while clearing a house.

“A crazy day ended,” Bellavia told Task & Purpose in 2019, “And we went on to the next crazy fight, and there were plenty of those for the rest of the time we were in Fallujah.”