North Korea is developing a HIMARS for nuclear missiles 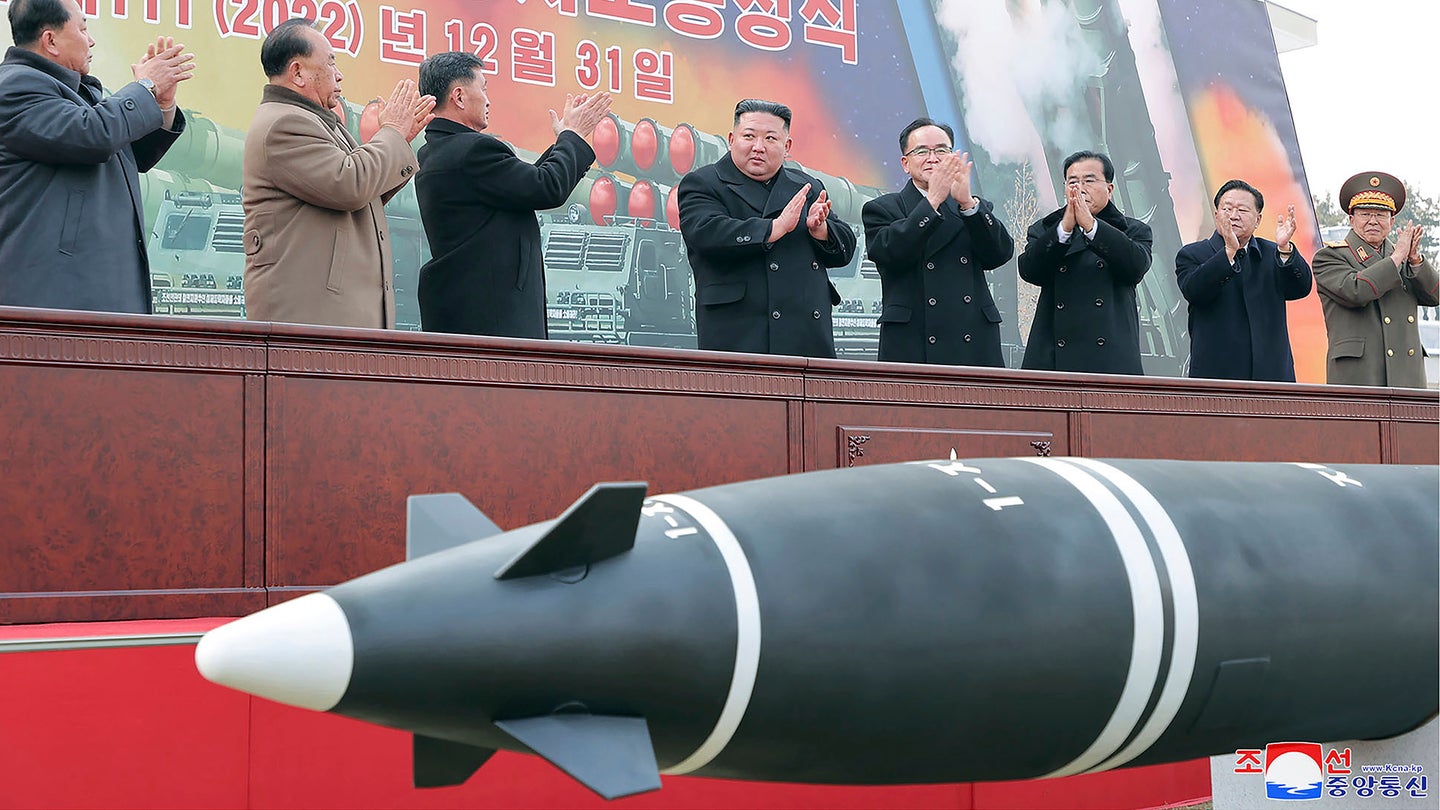 North Korea says it is developing a monster 600mm multiple-launch rocket system that it claims can strike targets in South Korea with tactical nuclear weapons, according to the reclusive communist country’s state-run media.

Video of the KN-25 rocket launchers aired by CNN appears to show that each launcher has a maximum payload of up to six rockets.

To put that into perspective, the U.S. military’s High Mobility Artillery Rocket Systems, or HIMARS, can fire a total of six 227mm Guided Multiple Launch Rocket System munitions up to 43 miles or one 610mm Army Tactical Missile System rocket, with a range of up to 186 miles.

While inspecting 30 of the “super-large multiple launch rocket systems” on New Year’s Eve, North Korean dictator Kim Jong Un claimed that all of South Korea is within range of the launchers, which are capable of firing tactical nuclear warheads, according to a report from the state-run Korean Central News Agency.

“It will discharge in future the combat mission of overpowering the enemy as a core, offensive weapon of our armed forces,” Kim said in a speech.

North Korea’s state-run media also claims that the rocket launchers were successfully tested on Dec. 31 and Jan. 1, striking targets in the Sea of Japan.

During a recent meeting of North Korea’s ruling Workers’ Party of Korea, Kim also called for an “exponential increase of the country’s nuclear arsenal” that would involve mass producing tactical nuclear weapons, the Korean Central News Agency reported on Jan. 1.

When asked about Kim’s comments about increasing North Korea’s nuclear arsenal, National Security Council spokesman John Kirby told reporters on Wednesday that the United States has increased its ability to collect intelligence both on and off the Korean peninsula.

“We have been watching closely — and will continue to watch closely — the Kim regime’s pursuit of additional advanced military capabilities — and certainly their nuclear ambitions in that regard — and continue to make sure that we are properly postured to defend both our chief alliances in that part of the world with Japan and South Korea, but also our international security interest in the region and beyond,” Kirby told reporters.

While the KN-25 can carry conventional munitions, it remains to be seen whether North Korea can miniaturize nuclear weapons to the point that they can be fitted onto the weapons system’s 600mm missiles, said Bruce Bennett, a North Korea expert with the RAND Corporation.

The U.S. Army’s “Atomic Annie” cannon had a 280mm diameter and the United States later built nuclear artillery shells with a 155mm diameter, but it is not known if North Korea has been able to master that same technology yet, Bennett told Task & Purpose on Wednesday.

If the KN-25 is eventually able to carry nuclear weapons, each missile would be able to fly up to 250 miles, and that means these weapons systems could potentially do much more damage than the battlefield nuclear weapons fielded by the U.S. military in the past, Bennett said.

The “Davy Crockett” nuclear recoilless rifle fielded by the Army during the Cold War fired a warhead with a yield of between 0.01 and 0.02 kilotons, roughly 10 to 20 tons of TNT. But Kim has talked about using the KN-25 against airfields, ports, and other targets, Bennett said.

Kim is likely describing the nuclear munitions that could be fired by the KN-25 as “tactical” to exploit differences in how South Korea and the United States view the threats posed by short-range missiles, Bennett said. Under President Donald Trump, the U.S. government repeatedly discounted the threat posed by such missiles because they cannot reach American territory.