The M1 Abrams main battle tank may be the most iconic armored combat vehicle in the Department of Defense’s arsenal,... 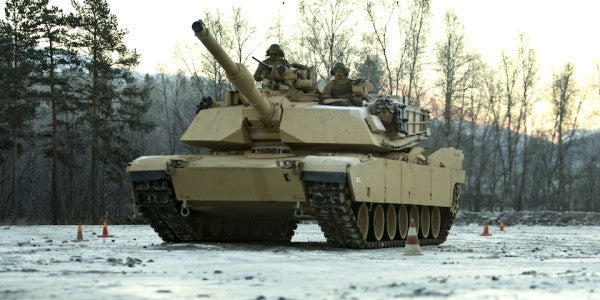 The M1 Abrams main battle tank may be the most iconic armored combat vehicle in the Department of Defense’s arsenal, but it’s far from the most maneuverable. Although far more mobile and flexible than the M60 it replaced back in 1980 and capable of hauling ass at 30 mph on rugged terrain, the Abrams is more known for its imposing firepower and armor. It’s not suited for a downrange performance of Swan Lake.

That’s what makes this video of an M1 Abrams executing a near-perfect drift in the snowy byways of Norway, brought to my attention by Washington Post military reporter Dan Lamothe on April 10, so damn delightful: This Abrams floats like a butterfly, but it stings like a 62 metric-ton armored shithouse.

Here it is in GIF form, for your endlessly looped pleasure:

The footage was shot during the Cold Response exercise by NATO forces back in 2016. In this clip, a Norwegian Telemark Battalion is teaching U.S. Marine Corps M1A1 tankers “techniques of driving tracked vehicles in winter conditions” on a specially designed ice track.

The footage is two years old, but it certainly fits with the Corps’ ongoing reexamination of its cold-weather gear and tactics for a potential conflict in Eastern Europe.

That said, this is unfortunately not the best tank drift video I’ve seen since watching tank videos became my day job. That honor is reserved for this random footage of a diesel-powered Russian (or Ukrainian) T-80UD performing an armored tribute to “The Fast And The Furious: Tokyo Drift” in an abandoned concrete parking lot somewhere — without the requisite snow.

To be clear, we are not endorsing drifting in civilian areas unless you happen to be legendary “Drift King” Keiichi Tsuchiya, but we’ll leave this here just in case. And now, the Teriyaki Boyz: