Stuck in traffic for eight hours? How about some Jimmy Deans. 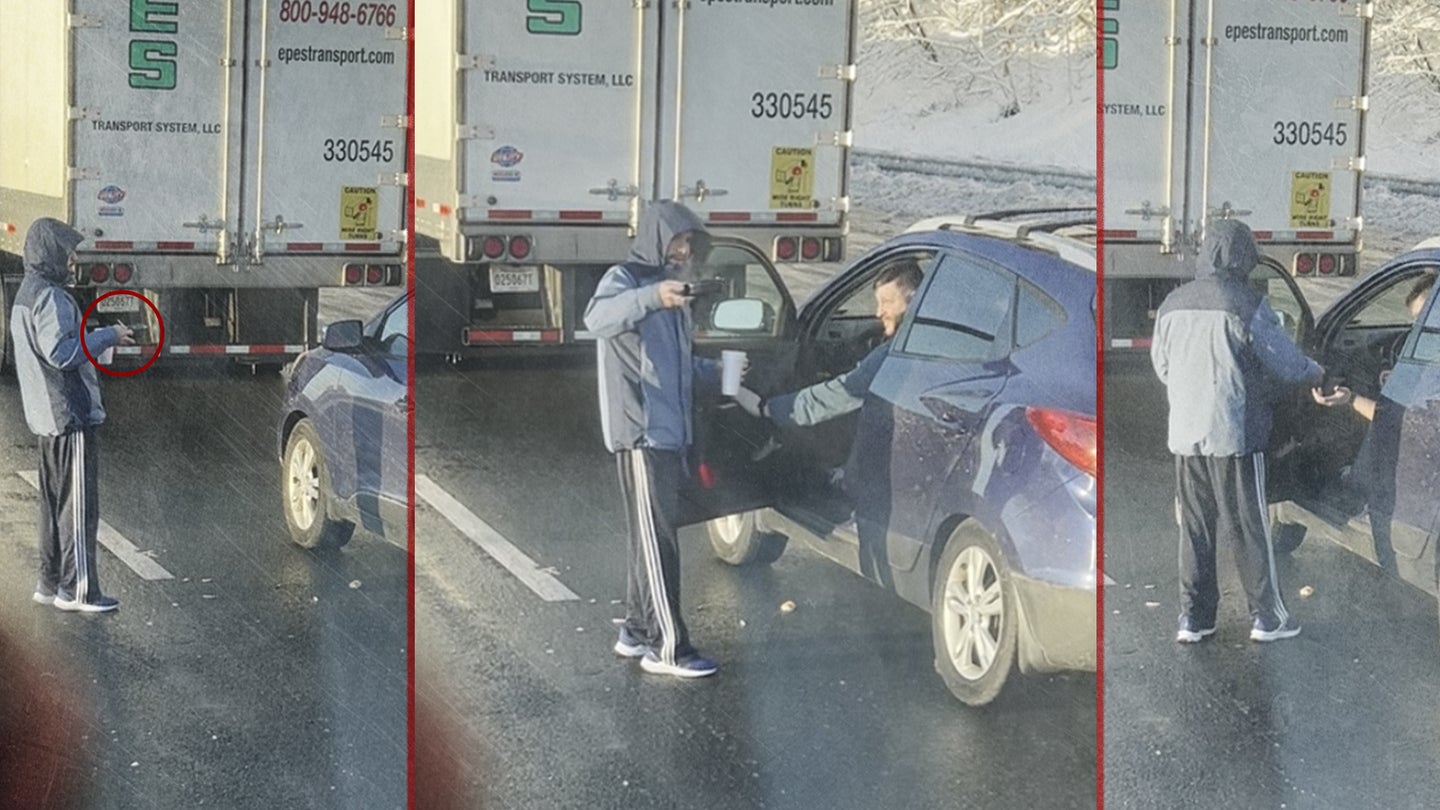 Screenshots from a video showing Jean-Carlo Gachet as he hands out food to another stranded driver on Interstate 95.
SHARE

A rare blizzard left much of the mid-Atlantic snowed in earlier this week, with some people stranded in traffic for almost an entire day on icy roads. In Virginia, a truck driver and Marine Corps Reservist took the time to whip up an improvised breakfast for his temporary neighbors on Interstate 95 which stretches from the Florida coast up to northeastern Maine.

Being stuck in a car for hours on a freezing winter morning might make anyone reach for a cheese and veggie omelet MRE, but Jean-Carlo Gachet, a corporal in the Marine Corps Reserves, had something better – a Jimmy Dean breakfast bowl and a cup of fruit punch.

“We have a lot more resources on a truck – food, water, a bed,” said Gachet. “I wouldn’t have wanted to be in a car in that situation.”

Gachet was headed from Warwick, Rhode Island to Savannah, Georgia when he was caught up in traffic near Woodbridge, Virginia early Monday morning, among the thousands of drivers who would end up stranded on highways during an unusually large snowfall. Gachet and the drivers around him had been stuck for almost eight hours when he started preparing a meal.

“He was right behind me, I had seen him walking his dog before,” said Gachet.

Gachet used the microwave in his truck to prepare the much-welcomed breakfast, then brought it out to those around him.

“So I just walked up and gestured to the door, told him I’d made some breakfast,” Gachet said. “It was him and his mother, they were so thankful, it was a nice moment.”

In the early morning hours, Gachet had seen some drivers simply abandoning their vehicles, walking towards off-ramps in search of shelter. Some stretches of I-95 were shut down for almost two days, leaving drivers stranded on highways conserving battery power in their cars and phones. Among them was Virginia Sen. Tim Kaine, who ended up providing updates on the situation while stuck with others.

When not driving a truck, Gachet is a radio operator in the Marine Corps Reserve, assigned to Hotel Battery, 3rd Battalion, 14th Marine Regiment, out of Richmond, Virginia. His favorite MRE? The pork flavored maple sausage patty, something not too far from a Jimmy Dean breakfast bowl, and certainly something anyone would appreciate, whether stranded on a snowy highway or in Marine Corps boot camp.

It’s part of a long tradition of Marines helping out those in need, from soaking their dress uniforms to help stranded drivers to rescuing a woman pinned under a vehicle in Washington, D.C.

As of Wednesday morning, roads were clearing up and Gachet was south of Richmond, Virginia, on the way to make his delivery and looking for breakfast spots in Savannah.