Since Harambe’s untimely death in May 2016, the silverback gorilla’s stern likeness has graced everything from t-shirts to tote bags.... 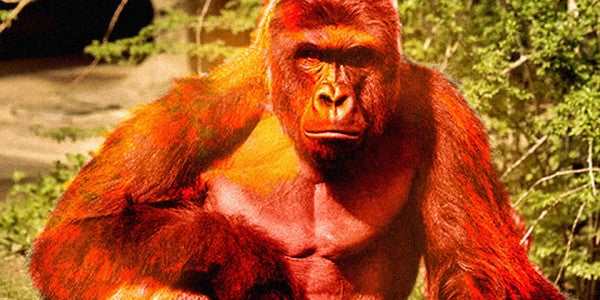 Since Harambe’s untimely death in May 2016, the silverback gorilla’s stern likeness has graced everything from t-shirts to tote bags. “Dicks out for Harambe” was practically the catchphrase of the summer. Eulogy songs were sung. Memes were made. Expensive Harambe tattoos were etched onto biceps. Writers spilled gallons of ink explaining what it all means. Then, Harambe suddenly vanished. Or so we thought.

Now, nearly a year after his tragic death, Harambe has surfaced once again, this time as a Flamin’ Hot Cheeto for auction on eBay. The listing showed a picture of the Cheeto, which at first glance looks like nothing more than a red-hot baked lump of cornmeal. But then, when placed alongside a picture of a gorilla climbing a tree, as it was in the eBay listing, it becomes instantly obvious what it actually is: a Flamin’ Hot Harambe.

Think about this. How often do you take the time to look at Cheetos when you’re eating them? Never. The consumption of cornmeal snacks is a purely mechanical process. Hand goes in bag. Snack goes in mouth. That’s it. It is, therefore, truly remarkable that someone discovered this hot and cheesy reincarnation of Harambe (may he rest in peace). And it’s even more remarkable that they had the audacity to sell it.

Whoever it was (a genius, presumably) is now, as of Feb. 7, a hundred grand richer. That’s right. The winning bid was $99,900, made by someone with a long and impeccable track record of following through with their eBay purchases. Think about that the next time you eat anything without first closely scrutinizing it to see if it even vaguely resembles a famous person or animal. How many thousands, or millions, of dollars have each of us literally flushed down the toilet? It’s a depressing thought to consider.

There’s another important lesson to be learned here: The power of Harambe is alive and well. In fact, there are now tons of Harambe-shaped Cheetos up for auction on eBay, and people are paying good money for them. So, yeah, Harambe wasn’t just the flavor of the month. He was, and is, much more than just a silly internet meme and an excuse for men to expose themselves in public. Like Shakespeare and Mozart, he’s one of the immortals. A hero of an entire generation. My generation. Looks like we’re going to be seeing a lot more dicks out in 2017.