Khizr Khan, the father of a fallen Iraq veteran and an outspoken Muslim American who famously traded barbs with then-candidate... 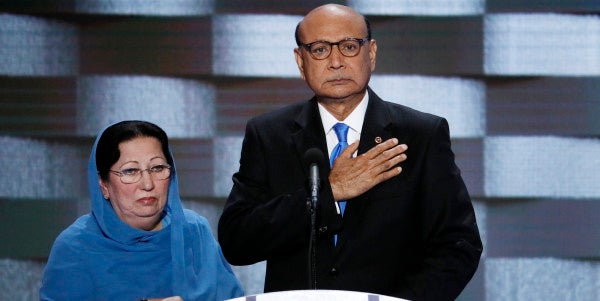 Khizr Khan, the father of a fallen Iraq veteran and an outspoken Muslim American who famously traded barbs with then-candidate Donald Trump on the campaign trail last year, canceled a planned Tuesday speaking appearance in Canada after being told that his “travel privileges” as a U.S. citizen are “being reviewed,” according to a representative.

The news was first announced by Ramsey Talks, the organizer of Khan’s planned $89-per-ticket speech in Toronto. “Late Sunday Evening Khizr Khan, an American citizen for over 30 years, was notified that his travel privileges are being reviewed,” the announcement said. “As a consequence, Mr. Khan will not be traveling to Toronto on March 7th to speak about tolerance, understanding, and the rule of law.”

“This turn of events is not just of deep concern to me but to all my fellow Americans who cherish our freedom to travel abroad,” Khan said in the statement. “I have not been given any reason as to why. I am grateful for your support and look forward to visiting Toronto in the near future.”

Related: Muslim Gold Star Dad To Trump: Have You Read The Constitution?»

Khan’s cancellation spurred speculation that he faced special travel scrutiny from U.S. authorities due to his status as an American Muslim… or as a long-time antagonist of Trump.

In July 2016, Khan and his wife Ghazala made world headlines by railing against Trump at the Democratic National Convention. The lawyer, who moved his family to the U.S. in 1980 and whose son, Humayun, was an Army captain killed by a vehicle-borne IED in Baqubah in 2004, assailed the future president’s promise to curtail U.S. immigration by Muslims. Trump responded by belittling the Khans in multiple interviews, setting off a war of words that played out on cable TV and Sunday-morning political shows. Both became polarizing figures for political partisans; Democrats even reportedly courted Khan to run for office.

It’s unclear what how Khan’s travel status could be “reviewed,” and who might be doing the reviewing. The Trump administration’s much-maligned “travel ban,” an updated version of which the president signed Monday, doesn’t go into effect for another week and a half, and wouldn’t have applied to Khan, a longtime American citizen, in any case. The Department of Homeland Security’s public affairs office did not immediately respond to inquiries from Task & Purpose.

Khan’s lunchtime speech Tuesday was supposed to focus “on what we can do about the appalling turn of events in Washington,” according to the Ramsay Talks website.

The website added: “Please join us to hear the man who defines what America still is and must be.”