The Cold War-era Su-24 “Fencer” strike jet was designed to penetrate enemy air defenses at low levels. And a pair... 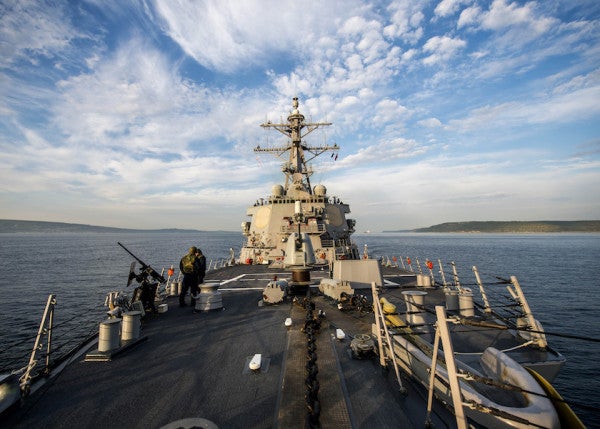 The Cold War-era Su-24 “Fencer” strike jet was designed to penetrate enemy air defenses at low levels. And a pair of Russian Su-24s appeared to be testing their ability to do just that when they flew a series of simulated attacks runs on the USS Donald Cook soon after it departed from the Polish port of Gdynia.

The first round of simulated attacks runs, on April 11, occurred when the USS Donald Cook, a guided missile destroyer, was approximately 70 nautical miles from port in the Baltic Sea. Two unarmed Su-24s made a total of 20 passes on the U.S. Navy warship, flying within 1,000 yards of the vessel and at an altitude of 100 feet — low enough to create wakes in the water.

The second round occurred on April 12, when, again, two unarmed Su-24s made simulated low-level attack runs on the USS Donald Cook. This time they were accompanied by a pair of Ka-27 Helix helicopters, which flew circles around the destroyer, apparently taking pictures.

The two incidents were “more aggressive than anything we’ve seen in some time,” a senior American defense official told CBS News, who first reported the story.

In a statement, the U.S. European Command (EUCOM) said: “We have deep concerns about the unsafe and unprofessional Russian flight maneuvers. These actions have the potential to unnecessarily escalate tensions between countries, and could result in a miscalculation or accident that could cause serious injury or death.”

The below footage, released by EUCOM, shows the simulated attacks from the perspective of American sailors aboard the USS Donald Cook.