At least 30 people have been killed in a triple suicide attack in northeast Nigerian state of Borno, state emergency officials said on Monday, in the biggest mass killing this year by suicide bombers. 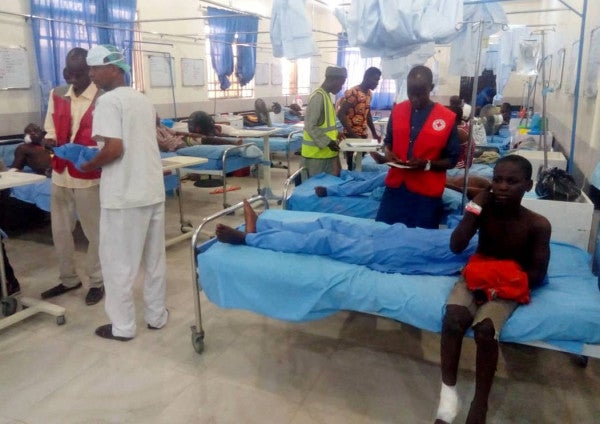 MAIDUGURI, Nigeria (Reuters) – At least 30 people have been killed in a triple suicide attack in northeast Nigerian state of Borno, state emergency officials said on Monday, in the biggest mass killing this year by suicide bombers.

No group has yet claimed responsibility for the attack.

The Boko Haram group and its Islamic State splinter group have often carried out attacks targeting civilians and the military in Borno state. Their attacks have claimed hundreds of thousands of lives and displaced millions of people.

“Yesterday around 8pm (1900 GMT) it was reported that there was a very loud explosion in (the village of) Konduga. On reaching the scene of the incident we found there was a lot of casualties. In fact the death toll was over 30 and the injured over 42,” an emergency service official told Reuters.

The military did not respond to a request for comment.

Earlier the village head, Bulama Kalli, said three suicide bombers had taken part in the attack, targeting a place where villagers had gathered to watch a soccer match on a large screen. Most of those killed have now been buried while several survivors are still in hospital in Maiguduri, Kalli said.

Konduga is located some 25km (15 miles) from Maiduguri, the state capital of Borno state.

The Nigerian government says the Boko Haram insurgency, and the rival Islamic State West Africa Province group, have been largely defeated, but they continue to launch attacks on civilian and military targets.

The decade-long insurgency has killed more than 30,000 people and displaced millions of civilians in northeast Nigeria.