PCSing to coastal California is a dream assignment to some: beautiful weather, an abundance of things to see and do,... 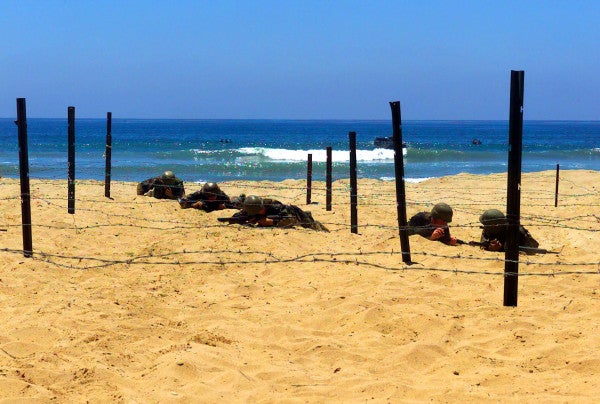 PCSing to coastal California is a dream assignment to some: beautiful weather, an abundance of things to see and do, and the Pacific ocean! And yes… there is also a higher cost of living than many areas you may have lived before. It means being stationed at the home of the 1st Marine Division, the oldest, largest and most decorated division in the United States Marine Corps. It’s a large installation, spanning more than one county, and can be a different experience for many military families. So let’s dive in and explore your new duty station, then head over to PCSgrades.com to for reviews for base housing, neighborhoods, and more!

Naval Hospital – NHCP is a new facility, completed around 2012, and located on the south side of the installation.

Balboa – Balboa is another Naval Hospital located in San Diego, and houses some of the most advanced Naval medicine clinics on the west coast. It is the Bethesda equivalent, but with a more updated facility.

Post Exchange – the PX aboard Camp Pendleton is also new, located near NHCP, and boasts a Dunkin Donuts, among several smaller niche shops.

Families who choose not to live in base housing often opt to live in the San Clemente, Oceanside or Fallbrook areas. CheckPCSgrades.com for photos and reviews from fellow military and veteran families on off-base housing/neighborhood options.

The median home cost in San Diego is $575,000 which is well above the national average making it a rather expensive place to buy.

Camp Pendleton has all the same rules that other military installations have. Don’t walk on the grass. Stop your car for the lowering of the flag. Don’t use your phone while driving on base. Wear proper civilian attire – though the rule on close-toed shoes is generally waved at this installation due to the proximity of the beach.

While the installation feels laid back because of its closeness to the beach (and its lack of closeness to Marine Corps Headquarters), the business aboard Camp Pendleton is incredibly and the. Don’t off-road on the many dirt roads you’ll find in seemingly random places, or you might find yourself in the middle of a hot range.

Atop a 1st Sgt’s Hill near Camp Horno, stands the crosses that were, at one point, heroically saved by a group of Marines from 3/5 during one of the many wildfires in recent years. The crosses are memorials erected by Marines in honor of their fallen in Iraq and Afghanistan.

Every infantry Marine aboard Camp Pendleton will, at some point, visit the 5th Marines Memorial Garden. It is open to everyone who finds themselves stationed aboard the installation, whether active duty or family. It is located on the north side of Camp Pendleton, at Camp San Mateo.

Californians are all about delicious food. You’ll find that In-n-Out has die-hard fans. Beach Break Cafe is famed as the best breakfast in town. And Chronic Taco is a local favorite. Ruby’s Diner serves amazing fish tacos. The Jolly Roger has a great view of the harbor. And Harbor Fish and Chips has delicious fresh food.

This market is a weekly occurrence year round. People travel from all over to take part in the festivities that include food, entertainment, shopping, and even a family-friendly KidZone.

The famed pier is a busy location and a tourist hotspot. It is located in the heart of Oceanside.

Located aboard the installation on Vandergrift Blvd, this paintball park is open to ages 10 and up, with hours Friday to Sunday, from 0830 – 1700. They take private reservations 7 days a week for groups of 15 or more.

Located next to the paintball park. Camp Pendleton Playland features a zip line, laser tag, several bounce houses and more. It’s only open on weekends from 1000 – 1700.

There are a lot of other things to do around Camp Pendleton, as SoCal is rich in perfect weather. Other places to visit while stationed aboard Camp Pendleton are Knott’s Berry Farm (which converts to Knott’s Scary Farm for Halloween), Lego Land, and Universal Studios. Of course, Disneyland is always a favorite. The weather is nearly always perfect for whatever plans you have.

If you need more info about the area, go to PCSgrades.com where you can see what other military families think about Camp Pendleton and the entire area. Enjoy your time aboard the installation!