"We want less suicides. No matter how you put this down, in any kind of way, that's just how we want to see it." 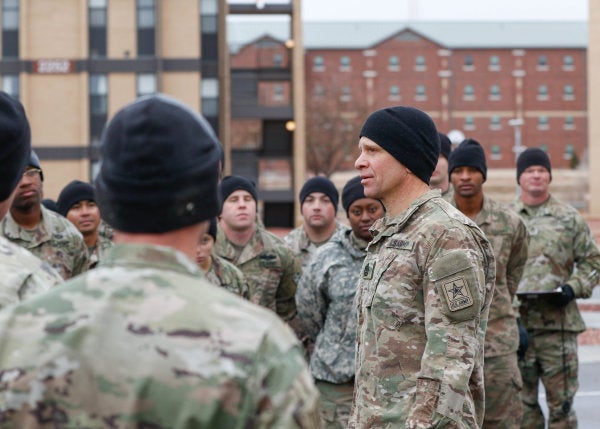 After a series of suicides at Wainwright, a behavioral health team from Army Medical Command visited the base, finding a number of factors that may have been contributing to suicidal thoughts, including the installation's remoteness; loneliness; and minimal food options. As a result, the Army demanded change.

The command visit came as the base was reeling from the deaths of at least nine soldiers by suicide between May 2018 and October 2019.

On Monday, Army Secretary Ryan McCarthy and Sergeant Major of the Army Michael Grinston were at Fort Wainwright for a more general visit, checking on things like readiness — but also, to see first-hand the improvements the installation has made.

According to information provided by Fort Wainwright, an “intensive outpatient behavioral health program” has been instituted, providing care to its first patients on Jan. 6th; the installation also received $240,000 for “entertainment support,” such as comedy acts and concerts. Soldiers are also now being released at 3 p.m. on the last duty day on the second and fourth weeks of every month.

And while McCarthy and Grinston were encouraged and hopeful that these changes could help, Grinston admitted to reporters that there's no real way to gauge if it's working, other than hopefully seeing the trend of soldiers who die by suicide go down.

“It's always hard to gauge happiness,” Grinston told reporters on Monday. “We want less suicides. No matter how you put this down, in any kind of way, that's just how we want to see it.”

Aside from the physical changes coming to Wainwright — including things like barracks renovations, more than $900,000 in new gym equipment, and blackout blinds for the long summer daylight hours in Alaska — McCarthy and Grinston are stressing the importance of simply knowing your teammates with the “This is My Squad” initiative, which focuses on squad cohesiveness.

McCarthy said that there is “no greater mechanism that we have other than the strengthening and making cohesive units,” adding that while the issue of suicide “has the total focus and energy of Army leadership, it really is that simple factor of knowing your teammate.”

“When you're tired and you're having a long day, it's going to be a teammate who's going to pick you up,” McCarthy said. “Nothing more scientific than that.”