In ‘8 Seconds Of Courage,’ A Soldier Investigates The Moment That Earned Him The Medal Of Honor

On Aug. 8, 2012, I lost a friend, four families lost their husband and fathers, and the country gained a... 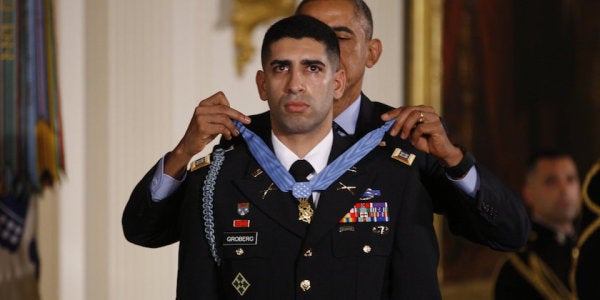 On Aug. 8, 2012, I lost a friend, four families lost their husband and fathers, and the country gained a hero. My friend Command Sgt. Maj. Kevin Griffin, Majs. Tom Kennedy and Maj. David Gray, and USAID Foreign Service Officer Ragaei Abdelfattah were killed when a suicide bomber walked up to them and detonated while they were traveling by foot en route to a key leader engagement in the town of Asadbad in Afghanistan. The resulting explosion was so large that it triggered the detonation of a second bomber who was waiting to exploit the resulting breach in the security perimeter. Their ultimate target was Col. James Mingus, commander of 4th Brigade 4th Infantry Division out of Fort Carson, Colorado, who was on his way.

Mingus and the majority of the patrol were saved by the quick actions of then Lt. Flo Groberg, an immigrant from France who was on his second deployment to Afghanistan. At the time of the attack, he was in charge of Mingus’s security. Groberg noticed that a civilian was walking up to his formation in an odd manner. He quickly realized something was wrong and ran back to confront the individual. It took him eight seconds to run to the back of the formation, reach the individual and knocked him to the ground causing him to trigger his explosive device.

The blast threw Groberg into the air, tossing him on to a bridge. Griffin was killed instantly. He is to date the highest ranking enlisted casualty of the war in Afghanistan. Because the extra 15-man protection detail was not provided that day, Griffin volunteered to walk in the rear of the patrol to provide some extra needed security instead of walking in the middle of the formation as the protected individual. Along with Griffin, Kennedy, Gray, and Abdelfattah were killed and — the lives of those that survived were changed forever.

In the subsequent chaos, Groberg was discovered covered in blood from a severe wound to his leg and brought to a triage location while soldiers awaited reinforcements. Once he got his wits about him, he began to ask about his condition and then the condition of those he was charged with protecting. It was here he would learn about the injury to his leg and the devastating news that Griffin, his friend and mentor, didn’t make it.

Twenty-four hours later, while working overnight in “the Box” as an Observer Controller Trainer at the National Training Center in Fort Irwin California, I received a phone call from my wife, Alisha. She was in tears; I knew right away that something wasn’t right. She and Kevin’s wife Pamala had become friends a few years back while he and I were deployed to Iraq and had continued to keep in contact. Through her tears, she told me that Kevin had been killed by a suicide bomber in Afghanistan.

The shock hit me like a ton of bricks. Brigade Command Sergeants Major are not supposed to be in a dangerous enough situation to get hurt let alone killed. How did this happen? Why did it happen to such a great leader, mentor, and friend to so many people? After talking it through with my wife we made a commitment to go to Colorado to show our support to Pamala and the rest of Kevin’s family at his funeral.

The funeral turned into a family reunion for those that knew Kevin well. Many of the people who credit Kevin for shaping their careers were in attendance, including several of the troop commanders and Squadron leadership that I had served with during our last deployment. The funeral procession route was lined with non-commissioned officers whose lives and careers Kevin had shaped. I’ve had the misfortune of having to go to several funerals for soldiers I have known over the last 15 years, more then I ever thought I would, but none have stuck with me like Kevin’s.

When I read the words “The command sergeant major didn’t make it” in Groberg’s account of that day in his book, 8 Seconds of Courage, all the memories and feelings from that time came flooding back. I had read books about people I have known or written by people I knew, but I had never read a book in which the person I knew was killed in combat. Even though I knew it was coming, it was still a gut punch to read in print.

While my life would quickly return to normal, Groberg’s ordeal was just beginning. After the soldiers who found him were able to stop the bleeding they were able to get him to a field hospital where his injuries were stabilized enough to fly him to Germany. From there he was sent to Walter Reed where he would eventually have to make the biggest decision of his life, next to deciding to chase down the suicide bomber.

Groberg grew up as a runner, competing all the way up through college but he knew those days were no more as he thought through whether or not he should allow the doctors to take his leg. After dozens of surgeries and help from a brace, Flo has been able to keep his severely damaged leg. His ordeal had taken a lot from him both mentally and physically but it would not take his leg.

Keeping his leg would be an important part of his overall recovery. As Flo describes, he was having a hard time mentally adjusting to the fact that he had survived the attack. But his new physical outlook and meeting his girlfriend Carsen helped. Then he got the call that would change his life. President Barack Obama, who he had met during his stay at Walter Reed was going to award him with the Medal of Honor for his “8 seconds of courage,” an eight-second decision that changed his life and saved many others.

While I have not met Flo Groberg, in reading his memoir I cannot think of a better person to maintain the legacy of those that did not survive the attack on August 8th, 2012. His humble outlook and dedication to honoring the families of those that paid the biggest price would have made Command Sergeant Major Kevin Griffin very proud.

Major James King has over 22 years of service, during which he has deployed three times in support of Operation Iraqi Freedom. He currently serves as the G2 Analysis and Control Element Chief for U.S. Army South. Major King is a regular contributor to West Point's Modern War Institute. His article “New Rules for Advisers: Lessons from a Year with the Iraqi Army” was the winner of last year's Small Wars Journal Writing Contest. This article represents his own views, which are not necessarily those of the US Army South, the Department of the Army, the Defense Department, nor indeed the entire U.S. government.