This is what it's like to be a metaverse mechanic. 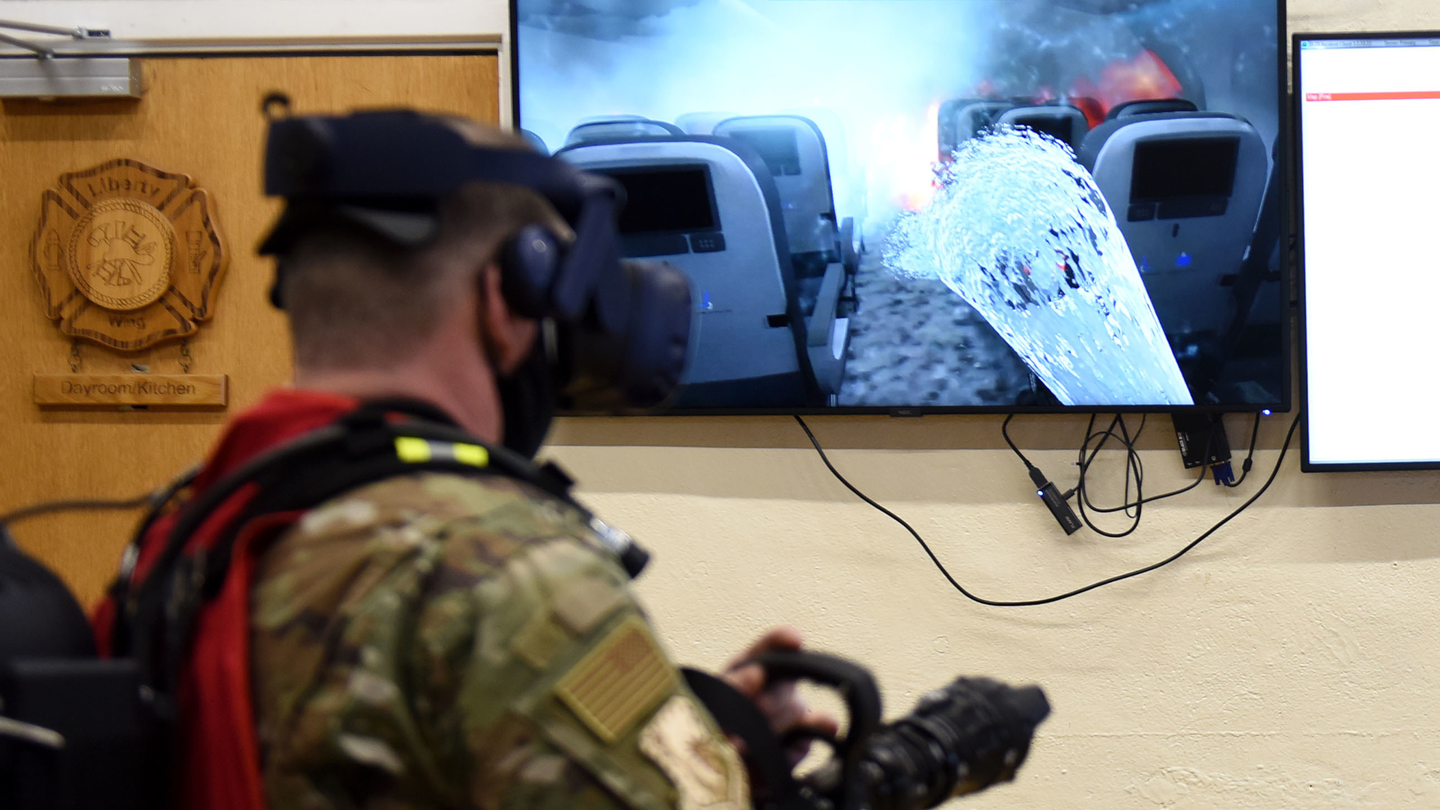 What do the 1990s and the United States Air Force have in common? They both want you to know that they love virtual reality, and envision it being used for everything. Task and Purpose went to Washington, D.C., where we had a chance to play with the new tools being developed to teach airmen how to keep the U.S. Air Force’s planes running. Not content with simply making a simulator for maintainers, the Air Force envisions the Maintenance Operations and Training in Augmented Reality (MOTAR) as being a training program, a coursework hosting service, a personnel file, and a social network to organize units across multiple end-user devices. Essentially, the Air Force wants to introduce a service that’s a cross between video game purchasing services like Steam and the Xbox Live Marketplace, social networks like Facebook, and virtual reality programs like VRChat and Mark Zuckerberg’s lampooned “metaverse.” But are the Air Force’s ambitions attainable? To find out, I spoke with the developers of the Tech Training Transformation program, which is the team developing this family of systems.

When I sat down with Maj. Johnson and Maj. Abbott, the representatives from the service’s Air Education and Training Command (AETC), they wanted two things to be absolutely clear: they envision this system changing everything about the way the military does training, and they wanted me to try it out hands-on. One of the first things that they acknowledged was that today’s young people entering the workforce learn differently than the way Gen X and older Millennials did, and may not respond as well to simply being handed a textbook or a PDF and being told to read. These “digital natives,” as Johnson and Abbot called them, have been using computer-assisted learning since early grade school, if not kindergarten, and learn best in a high-tech environment. Here are a few key takeaways from my time with the various systems that I tested and observed.

I’m not an aircraft maintainer. Never have been. I’d also never used a VR headset before testing out the Air Force’s VR system. However, within 15 minutes, the program was able to show me the power and control systems of a C-130 cargo aircraft, where to activate the engines in the cockpit, how to raise and lower the ramp, and how to change a tire, all with zero prior knowledge. Additionally, when I made crucial errors that were unsafe, such as walking underneath the wingspan of the aircraft while the engine was on, or cutting a retaining wire on the tire without eye protection on, the program immediately warned me of my error. Having the automated system walking me through those steps, while also having a trained observer guiding me through the process meant that I went from fumbling my way around the hangar to moving through the interior of the plane rapidly and performing tasks on my own without prompting. This wasn’t just a “me” fluke, either. When AETC tested the system on students in the Crew Chief Fundamentals Course at Sheppard Air Base, Texas, they found that while the knowledge level of students trained using this new system was comparable to that of traditionally-trained students, they completed the 27-day course in less than 13 days, according to Air Force sources.

One of the first misconceptions that I had about this system was that it was simply a VR program to train aircraft maintainers and that it would take the place of existing simulators and training programs. However, the developers quickly corrected this, pointing out that the VR program is simply a small part of their overall design, which features things like automated evaluation, social networking, and even personnel management. The greater Member Operations Training Analytics and Reports platform (MOTAR) is a software-hosting ecosystem, similar to online libraries like Netflix or the XBOX Live Marketplace, allowing the hosting of training programs, but also the gathering of telemetry data, records management, and a command social network. Essentially they want to unify knowledge repositories like Joint Knowledge Online (JKO) with personnel records management sites, and add VR, making MOTAR a one-stop shop.

They want it to be Cross-platform and multiplayer

Whether you’re accessing MOTAR from a mobile device, laptop, tablet, home computer, or VR headset, the Air Force wants the platform to feature apps, or versions of apps, that are compatible with the airman’s device of choice. Obviously, things like VR programs aren’t going to be compatible with current handheld devices, but they can still host things like training videos, documents, and 2-dimensional interactive training apps. Also, they want to have virtual reality social networks where service members, represented by computer avatars, can interact with each other and train together.

The Air Force wants everyone to use it, from recruits to veterans

One of the phrases that everyone present touted was “from MEPS to the VA,” and at first I didn’t fully grasp how comprehensive that concept was. Their vision is that this system can be used to screen applicants to the Air Force and assess their particular aptitudes or education level, similar to how the ASVAB does currently, act as a knowledge repository for airmen throughout their service, and offer educational content to help service members transition back to civilian life. For instance, the system could be used by Air National Guard or Air Force Reserve airmen to complete hands-on portions of their career progression tests without needing to specifically schedule time with a plane that lines up with drill periods. In addition, Johnson told me that the program is considering providing unclassified training tools to prospective airmen who are selected to attend Basic Military Training (BMT) and measuring how well they perform in BMT or their respective technical schools, compared to those who go in blind.

They want everyone to use this system

As someone who’s in the Marine Reserves, I cracked a few jokes to the developers of this system that this was definitely “some Air Force stuff,” because the idea of being in one of the recruit depots or in my schoolhouse and being issued a VR headset to help me learn sounds outrageous. However, the airmen and civilians in charge of this project reassured me that this was something that they intended to pitch to all branches of the military, meaning that maybe someday even Marines would use VR to learn how to shoot, move, and drive MRAPs; that soldiers could use it to learn how to drive Strykers, Bradleys, and Abrams tanks; and that sailors could learn how to effectively crew a nuclear ballistic submarine, all without having to engage with such vehicles in the physical world.

They think your gaming history can be factored into your aptitude

If someone is a team player who effectively coordinates with their friends in “Call of Duty,” leading them to victory, that person might make a better-than-average military leader. Conversely, if someone “spends all their time in ‘Grand Theft Auto’ running over hookers,” they might not be the most mature of individuals, or at least that’s how Johnson explained the connection between gaming and aptitude. Integrating the player data from someone’s online gaming account into the system is something that will allow service members’ personnel records to reflect things like what sort of games they play, what actions they take, what kind of in-game milestones they pursue, and whether or not they have punitive action on their accounts. Of course, some may see this proposed idea as being a bit too “Big Brother,” but it shows the power and flexibility of the MOTAR system.

In the end, a system that fuses JKO, your military record, your unclassified military email address, and adds a healthy dose of virtual reality used by everyone in the Department of Defense is a concept that seems like a very distant possibility for the time being, but one that shows promise, nonetheless. The VR training system alone has already shown outstanding results in speeding up the training process for airmen, and I witnessed that capability firsthand. The use of automated scoring and telemetry removes factors like human error and bias that can play a role with a live evaluator, and the goal of allowing multiple trainees to use the same system at once for multi-person tasks is both attainable using existing technology. Finally, any effort to introduce a system that unifies personnel records and knowledge repositories is a welcome one, even if it’s not as integrated as the project envisions.