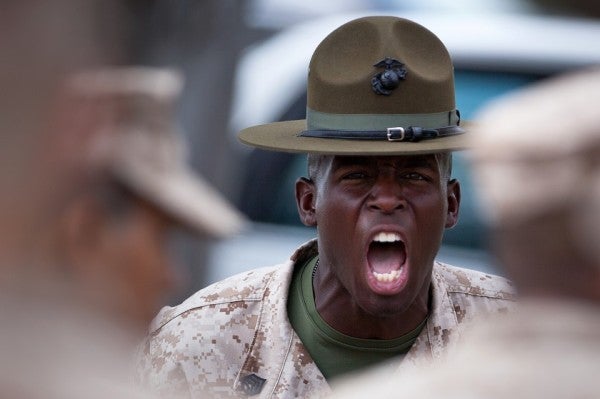 But, really, who can blame them? Before they earn their campaign cover, drill instructors spend untold hours learning the finer points of marching, screaming at people, and calling cadence. It’s in their blood.

So when they finally get a chance to belt it out, some of them do it with style, especially at the “Best Damn Cadence Calling Contest in the West,” an annual competition hosted by the West Coast Drill Instructor Association.

In the video, current and former drill instructors from the 1960’s to now compete, calling cadence from their time training recruits. Each drill instructor had three minutes to impress the panel, who were drill masters at Recruit Depot San Diego. This year’s winner was Shafi McCants, who served as a drill instructor from 1991 to 1993.

Marines from all generations will instantly recognize some of the songs — one instructor sings the Marines' Hymn. However, a few cadences channeled rhythm and blues, while others were a bit more old school. At one point, an instructor corrects an imaginary formation: “Forward — who told you to move?”

The contest was clearly more lighthearted than serious, which is a trip because it’s rarely a good sign when this many drill instructors look this happy (if they are, it’s usually because some sad recruit is running around sweeping sunshine or trying to catch his shadow).

Fortunately, as far as we know, no recruits were humiliated (more than usual) in the making of this two minute video. Check it out.