Tattoos have been popular for a long time, but among millennials at large, and veterans in particular, they’re far more... 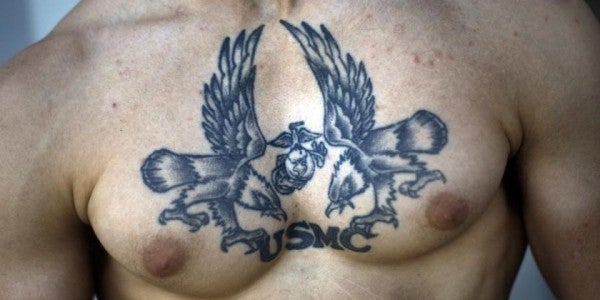 Tattoos have been popular for a long time, but among millennials at large, and veterans in particular, they’re far more mainstream than they once were. From vividly beautiful artwork to service-related ink and unit insignias, and those tribal tats that were huge in the 1990s — tattoos are fucking everywhere.

Now, thanks to the miracle of science, we know why, and it has a lot to do with getting laid.

According to a new study published in Personality and Individual Differences, chicks dig tattoos, and what’s more, ink also intimidates other same-sex rivals — probably guys without tattoos, or those who have shitty ones.

Researchers at the Jagiellonian University Medical College in Poland recruited 215 male and 2,369 female participants (good ratio) for the study through social media, notes Playboy, which dove into the study recently. The participants, who were exclusively straight, and on average 25 years old, were shown photos of tattooed and non-tattooed men and asked to rate them.

The men were rated on a five-point scale which included: health, attractiveness, masculinity, dominance, aggression, and the potential for being a good partner and a good parent.

The women in the study rated men with tattoos as appearing healthier — interestingly enough, repeated tattooing has in fact been shown to help bolster the immune system — but not more or less attractive. Alternatively, men rated guys with tattoos as being more attractive to women, indicating that men with tattoos are seen as a greater threat in the dating world.

However, the women in the study tended to see tattooed men as short term partners, rather than as husband or father material, which is a bit harsh, because this is all about perception here. It’s not like having a tattoo actually makes you a badass or a tough guy, or that being inked means you’re going to be a loose cannon or a bad partner. That’s the same jacked up logic that’s used to justify the military’s absurd tattoo restrictions. Oh wait, I see a trend here, something about perception being reality.

In the end, the study seems to confirm what a lot of us already suspected: tats will probably help get you laid, but they might not get you married, which for some guys may be a blessing. So, depending on what you’re after, this may impact your decision to get a little ink (or a lot of it.)