If you’re kicking down doors, jumping out of planes, or pulling people from a burning building, you’re probably more concerned... 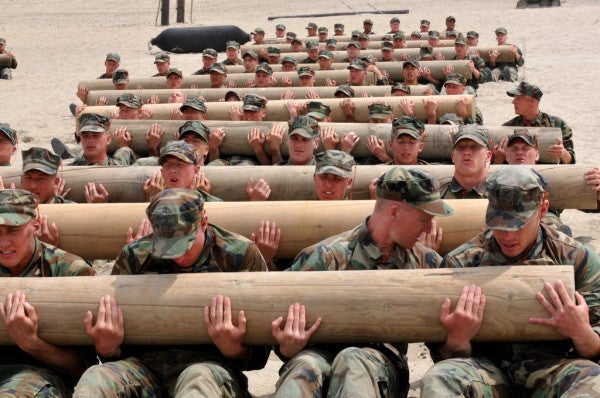 If you’re kicking down doors, jumping out of planes, or pulling people from a burning building, you’re probably more concerned with tactical fitness than with being ripped like Channing Tatum or Hugh Jackman.

For those preparing to enter an operational field within law enforcement or the military, or for veterans who want to maintain some level of athleticism, there are practical fitness workouts that prioritize functionality over aesthetics.

Task & Purpose spoke with Stew Smith, a former Navy SEAL officer who has written numerous books and articles about tactical fitness over the last 17 years. When it comes to tactical fitness, Smith explains that you shouldn’t be concerned with having six-pack abs or how big your biceps are.

Instead, “this training is going to make me better at inserting six miles with 60 pounds on my back or jumping out of an aircraft,” said Smith. “Your workout should be focused on answering those questions.”

In essence, tactical fitness comes down to practicality, and it’s still valuable to those outside of operational jobs or careers because its foundation is built on survival skills and survival fitness, explained Smith. Being able to perform in a dangerous or high-risk situation, like being strong enough to pull an injured co-worker to safety during a fire, or to swim to shore if you fall overboard on a boat, are all elements of tactical fitness.

Smith breaks tactical fitness down in a tiered system that builds upon three stages, which Smith categorizes as:

Each stage — to, through, and operational — has its own benchmarks and goals that are ultimately determined by what the participants want to get out of their training, explained Smith.

Getting to the training or event

This is what you have to do to make it to a test or course, explained Smith.

If you’re training to be a Navy SEAL and you’re a strong swimmer, but lack endurance and power, you may want to start lifting and doing flutter kicks in the sand while wet. Those who are built likes trucks, but lack stamina may want to work on their endurance, explained Smith.

“This typically means you have a fitness foundation from athletics or whatever, but you specialize a little bit and focus on the fitness test to get you into the training,” he said.

Watch Smith's workout video on lunges and lifesaving swimming below.

Getting through the training

Once you’ve gotten to the event — whether that’s a training course like Ranger School or you’ve made it to your Tough Mudder — your training takes on another level of specificity, Smith explained.

“Depending on what you’re doing, you need to focus on those tasks you’ll be tested in,” Smith said, adding that during the “through” phase, you need to identify the key aspects of your training and work on those.

If you’re preparing for an intense obstacle course with flaming tires and barbed wire awaiting you at the finish line, you should throw some agility training into the mix.

“You have to build a strong foundation so you can do that,” added Smith.

Smith walks you through how to navigate a Marine Corps obstacle course in the video below.

Getting through the operation or mission

When you’re training for an event you may find that “you're almost a triathlete with some strength,” said Smith, but once you’ve reached that stage, which Smith describes as the “operational side,” you may not be doing as much cardio, strength training, swimming, or running as you were previously.

For Smith, who cycles through all three phases annually, his operational phase, “is just a fancy way of saying my weight training phase,” and involves lifting, rucking, swimming with fins, and building up strength.

“As an athlete you don’t necessarily have to be good at everything, but great at one thing,” explained Smith, adding that a swimmer may not need to be great on land, or a sprinter may not need to do a lot of endurance training.

But for tactical athletes, “you have to be good at every element of fitness. … You need to have endurance, speed, muscle stamina, agility, strength, and power.”

The key difference between tactical fitness and other forms of physical training is that the latter focuses on versatility rather than specificity.

“You don’t need to be an A+ in all of those, but you need to be a good B student at everything,” said Smith. “Tactical fitness is all over the map.”

Once you’re in those operational commands, it becomes a matter of maintenance, explained Smith, who said that you should cycle back to the to, through and operational elements of your training.