Imagine this: You’re decked out in a wetsuit, vested in full scuba gear, and you slide into an aquarium tank.... 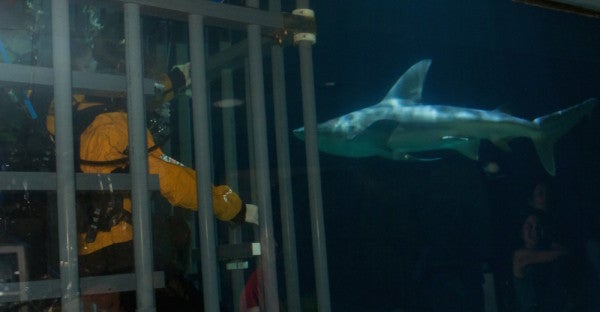 Imagine this: You’re decked out in a wetsuit, vested in full scuba gear, and you slide into an aquarium tank. It’s completely dark. Next thing you know, you’re surrounded by sharks. Terrifying? Sure, but according experts to the Point Defiance Zoo, it’s also therapeutic.

Operation Shark Dive is part of the adaptive sports program at Joint Base Lewis McChord. The program, which has been active since February, enables wounded or sick soldiers to stay active while letting them keep up with their physical training requirements.

Shark diving teaches the soldiers breathing techniques, Brian Caskin, a physical therapy assistant at Madigan Hospital on base, said in a story first released by the Department of Defense. The dive is free to soldiers in the Warrior Transition Battalion, who use the program to recover and return to their Army units, or separate or retire from the military.

“It is good practice for staying calm and for breathing control,” Caskin said. “They are addressing a fear while being forced to control their breathing.”

Though participants are perfectly safe, hosted within a cage, swimming with sharks can be unsettling. But, David Todd, a diver from the Point Defiance Zoo and Aquarium that partners with the Warrior Transition Battalion, explained experience is meant to be “mesmerizing.”

“We've all seen ‘Jaws,’ and most people would say sharks are intimidating, but some of the sharks are even timid around the 4-inch-long damselfish in the tank,” he added.

“It’s definitely a check off the bucket list,” Parra said. “I didn’t think I’d be checking off something like this.”