This Letter Expresses How Eternal Love Survives Everything, Even War 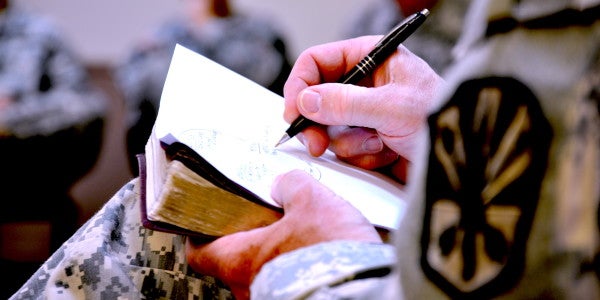 Editor’s Note: Task & Purpose is proud to publish this fictional essay by Karin Lowachee — the 3rd place submission of a writing contest presented by the Armed Services Arts Partnership and the Atlantic Council’s The Art of the Future Project. The contest sought letters home from a conflict set in the 2030s as part of a first-person exploration of what homecoming might be like after future wars.

I know you tried. You didn’t want me to leave the second time, you couldn’t understand why I’d come back to this war. I have no explanation that would ever make sense to you when it barely makes sense to me. You’re my peace and I couldn’t live in it.

Let me tell the story this time. They can’t censor these thoughts. You shouldn’t want to hear about battles. There’s nothing to tell about losing lives to the rocks. Humankind has always fought over one resource or another – land, slaves, religion, fuel. The things we believe will source our souls. This isn’t a story about the Moon.

I’ll warn you right now, though: since you’re listening to this, it means you won’t like the ending. But just remember – we’ve told each other a hundred stories and somehow we keep coming back to the start. Going as far into space as I did, eventually you return to the birth of things. You remember how we looked into the night sky and said all those clichés? The universe reveals our pasts. It unfolds our origins. When you look up at the stars you see our beginning. When I look toward Earth I see our future. So maybe there is no “the end.”

So our story goes. That day you let me ride one of your bikes and I brought it down at the side of the road. All of the anger in your eyes and I could only find it funny. The rev of those engines couldn’t drown out my heart. I could’ve said I wasn’t afraid of injury, that over time because of the war I was being replaced anyway. Did you see it then?

The way my hands curled on the bars, my fingertips the trigger to detonate grenades and all I wanted to do was run them along your skin. Could you find it in my eyes? The kilometers ahead where the ships were launching back to the stars and I could read their registry numbers on their hulls. These splices, replacements, and enhancements of me – the soldier you’d met in the snow. The way I didn’t feel the cold because space had limned my edges already in ice. Did you identify all the parts of me that you could possibly put back together? You with your mechanic’s touch.

Play this game with me, the one you invented that flays back the truth. Confirm or deny. It’s possible to love and not understand. It’s possible to love over distance and not waver from the absence. But there are giants out here, expanses and entities so vast that love could be dwarfed – love would succumb to the spinning yank of gravity until it became anchored to some alien world. We might forget our language over time. They say nothing could survive the wait, that evolution would inevitably change the species of our emotions. That this war that infiltrates between us and moves through the vacuum would set a sun toward supernova. Nothing could live in the reach of such an explosion. Love would disintegrate.

The Japanese have a word: kintsugi. The art of recognizing the beauty in broken things. The philosophy of restoration. The physical appearance of things is so deceiving when the importance lies with the way you look at me. You set the gold between my jagged edges, between you and me, and bring them together. There might be a rundown roadway of stars with the emptiness of cracks making spider web shapes out of solar systems, but we can fix it. There doesn’t have to be so much emphasis on destruction when the joining is what ultimately matters. I can come back to you somehow. This breakage and repair is our history, and the history of my service. There is still value in a thing that might be damaged and flawed. The violence of the universe’s first breath brought us life.

All of my wars have created shards of me but you took the broken parts and made them whole again.

Related: This is what fighting a nuclear war could be like in the future »

These are things I could never say to you in life. So now we’ve come to the part where you’re angry, because why couldn’t I write to you in the middle of it? Just know that whatever has happened, we might still see each other. They’ve put me back together so many times, so why not now? Tell them I want you there, show them this letter. Tell them if anything needs to be engineered, you are my expert. Nobody knows my hands like you do.

Nobody else has repaired my heart.

Tell me you’re sorry when I wake up, and I’ll do the same.

Karin Lowachee was born in South America, grew up in Canada, and worked in the Arctic. Her first novel WARCHILD won the 2001 Warner Aspect First Novel Contest. Both WARCHILD and her third novel CAGEBIRD were finalists for the Philip K. Dick Award. CAGEBIRD won the Prix Aurora Award for Best Long-Form Work in English and the Spectrum Award. Her books have been translated into French, Hebrew, and Japanese, and her short stories have appeared in various anthologies and online magazines. Her fourth novel was published through Orbit Books USA.