The chainsaw bayonet you never knew you needed is finally here

Shut up and take my money! 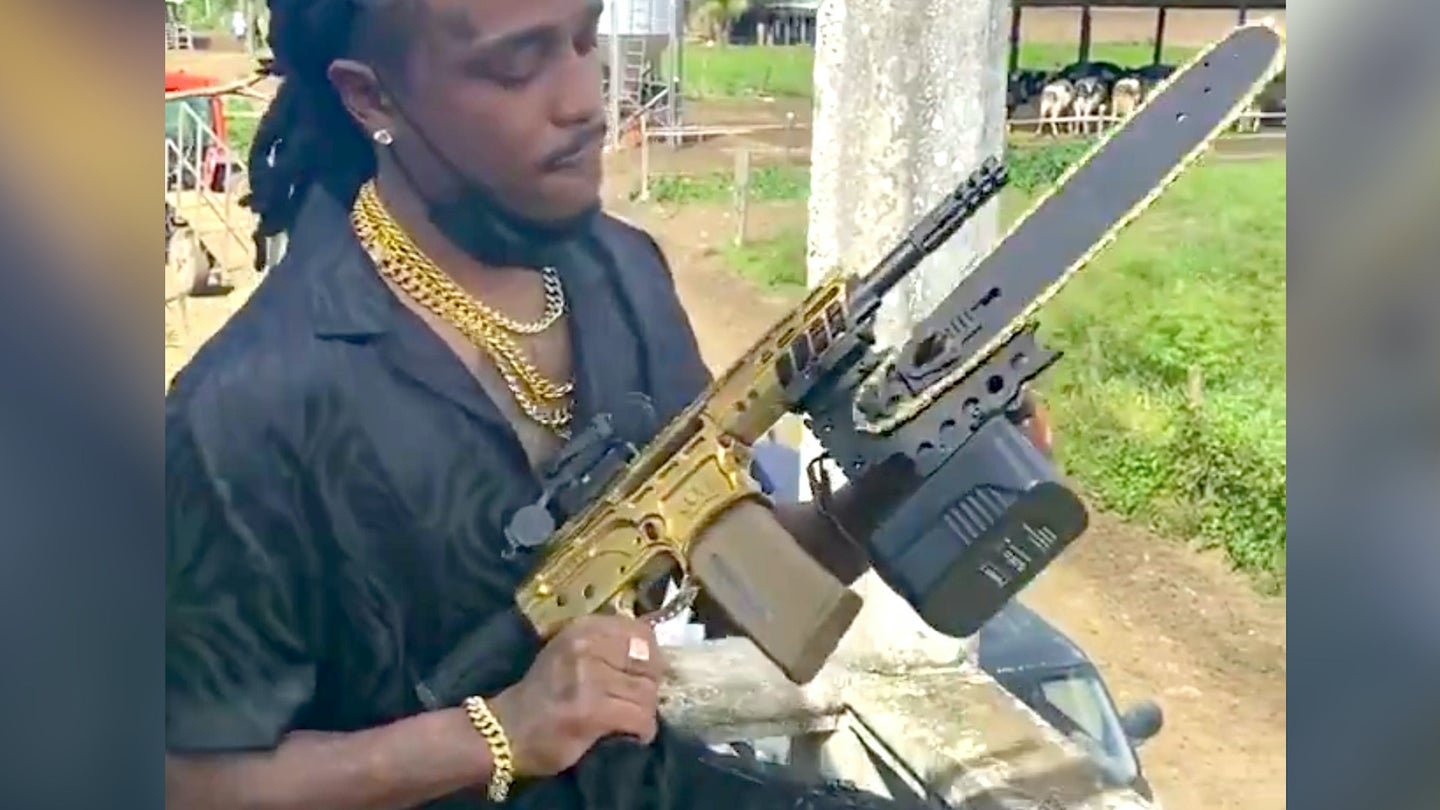 Someone has developed a chainsaw bayonet for AR-style rifles that’s suitable for zombie apocalypse scenarios and rap videos alike.

We recently spotted this widely-shared video courtesy of an American rapper known as Quavo, who showed off the utterly ridiculous device that is sure to help him kill zombies if they ever become reality. Check it out:

Quavo displayed the so-called ‘chainsaw choppa’ underneath the barrel of his preferred boomstick, which appears to be a shorty AR-15 rifle from F-1 Firearms. The custom build seems to be for a horror flick in development called The Resort, with F-1 and producer Randall Emmett credited with the design. The saw is controlled by a switch on the left side and the rifle itself and saw blades appear plated in gold — because if you’re going to be chopping off zombie heads, you better do it with some style.

While this particular chainsaw bayonet may be a custom build, a number of gun retailers sell them. A company called Panacea X sells a so-called ‘Kill-Saw’ chainsaw bayonet for a cool $500, while a similar item from Black Rose Firearms will set you back $700. Naturally, the latter version is emblazoned with ‘Zombie Killer’ on its side in case the zombies require a safety warning.

Now, you’re probably thinking: This is stupid. Why do these even exist? And that’s a perfectly reasonable observation. The answer, as it turns out, is at least in part due to a famously spectacular media fuckup from USA Today in November 2017.

In the wake of one of the deadliest mass shootings in the United States, when a disgraced former airman opened fire at a church in Sutherland Springs, Texas, the media outlet posted an explanatory video to Twitter about the killer’s AR-15 style rifle and its potential modifications. Among the accessories the video mentioned was a chainsaw bayonet, which needless to say is not a common item found in the safes of most gun aficionados.

USA Today quickly realized its error and issued a subsequent tweet — “to clarify … the shooter did not use a chainsaw bayonet” — but that didn’t stop the original video from being widely mocked on Twitter, with some even offering their own ideas for aftermarket rifle accessories, from a Picatinny lightsaber to an “under-barrel shark.”

As Jared Keller pointed out at the time, the first working chainsaw rifle attachment (outside of a video game) supposedly appeared first during the zombie apocalypse craze of 2012 at the annual SHOT show in Las Vegas, where one gunmaker strapped a saw to the rail of a modified AK-47. Unfortunately, it never really gained traction in the same way as accessories that are actually useful on your rifle.

But after a New York Daily News columnist in 2016 incredulously described what it was like to fire an AR-15 as ‘horrifying, menacing, and very loud’ and the subsequent USA Today debacle of 2017, at least one company decided to do what gunmakers do second-best: mock their critics. Going above and beyond spicy memes and charged rhetoric, Black Rose Firearms chose to actually build this stupid thing and sell it to “help increase ownership” of AR-mounted chainsaws so they could be a “real threat” instead of a media-manufactured one.

“Now own one for yourself, and protect against the next Zombie Apocalypse,” the Ohio-based company wrote of the device. “This is a real chainsaw with a rechargeable battery pack, and custom made chassis to attach to a Picatinny rail,” though it noted that if you actually used the chainsaw to cut objects, the black paint and engravings would “not hold up over time.” All this for a device costing 700 bucks!

So maybe a chainsaw bayonet is not the most useful tool to attach to your rifle, though Quavo shows it can certainly be one of the most fashionable. But let’s be real: Aside from rappers with chainsaw attachments and civilian survivalists praying for doomsday, it’s far more likely the U.S. military would bear the brunt of the fight against a potential zombie outbreak. Or as one mock military planning document from 2011 dryly noted, allied forces would ensure “freedom of action from zombie domination.” And they probably won’t be using chainsaws to do it.