Vet’s Illness Keeps Him From Walking, But He Stands For His Son’s Recruit Graduation

U.S. Army veteran Frankie Sanchez Sr. served for 23 years, but in 2016, he was diagnosed with Amyotrophic Lateral Sclerosis... 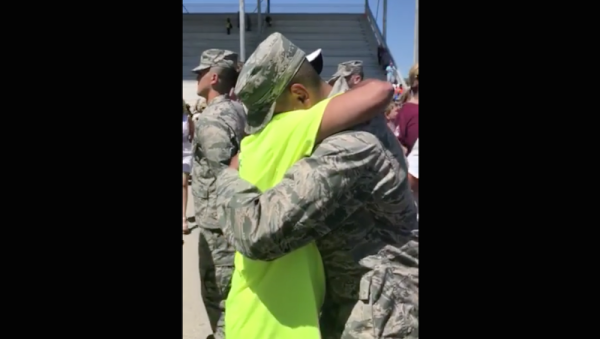 U.S. Army veteran Frankie Sanchez Sr. served for 23 years, but in 2016, he was diagnosed with Amyotrophic Lateral Sclerosis (ALS). The nerve condition, more commonly known as Lou Gehrig's disease, has left him confined to a wheelchair. But on May 28, he stood up for his son’s graduation from Air Force Basic Training.

The previous day, Sanchez was taken to the emergency room after a respiratory issue, and he feared he would miss his son Frankie’s graduation altogether.

“We hadn't slept, we hadn't eaten, we hadn't showered or changed clothes,” his wife Christy told Task & Purpose. “We checked out of the hospital at 9:46 a.m. and raced over to the base and got to our seats with about 10 minutes to spare.”

Luckily, Sanchez not only made it, but also managed to lift himself upright out of his wheelchair to tap his son out of attention.

“We knew the tap out would be special,” Christy said. “The video represents the amount of love and pride my husband and I have for our son.” And the pair stood embracing in a highly emotional moment.

“It was the most beautiful and memorable event I've ever witnessed in my life and I will never forget it as long as I live,” wrote Sanchez’s wife Christy on Facebook

The couple has three sons and has struggled since Sanchez’s diagnosis due to the disease’s rapid advancement. For unknown reasons, veterans are twice as likely to be diagnosed with ALS as the rest of the general population, according to the ALS Association.

A GoFundMe page has been set up to help offset the cost of his care. “He is getting weaker by the day and we are struggling to handle all of the emotions that consume us,” Christy wrote on the page. “Looking back, we think my husband's symptoms started 4 years ago. Most ALS patients live for two to five years after symptoms start.”