A brutal odyssey through Iraq’s deserts and unforgiving streets, the HBO miniseries, “Generation Kill,” tells the true story of 1st... 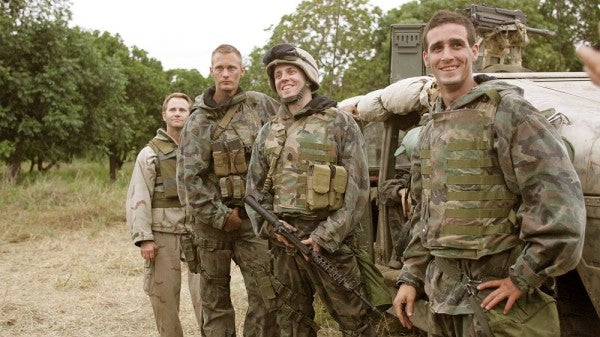 A brutal odyssey through Iraq’s deserts and unforgiving streets, the HBO miniseries, “Generation Kill,” tells the true story of 1st Reconnaissance Battalion during the March 2003 invasion of Iraq.

The seven-part miniseries looks closely at the moral ambiguity of war, and how ego, shifting mission parameters, and poor leadership can erode trust when and where it’s needed most. The show is based on the 2004 non-fiction book by Evan Wright with the same name, who embedded with 1st Recon in 2003 for two months while working as a reporter for Rolling Stone.

The men of 1st Recon overcame incredible odds during their push to Baghdad in stripped-down Humvees. Their story is one of battlefield bravery, brotherhood, camaraderie, and the underappreciated value of gallows humor in combat.

Directed by Susanna White and Simon Cellan Jones, HBO’s “Generation Kill” set a new standard for the portrayal of Post-9/11 service members at war. It presented the Marines of 1st Recon as the complex individuals they were in real life and not as caricatures.

Here are 10 things you probably never knew about “Generation Kill.”

The actors had to clean their own weapons.

According to HBO’s short documentary “Making ‘Generation Kill,’” even though the show had a team of armorers tasked with maintaining the weapons, equipment, and vehicles, the actors were responsible for maintaining their characters’ personal weapons.

“Generation Kill” featured some of the actual Marines from 1st Recon.

To prepare for their roles as highly trained and physically fit reconnaissance Marines, the actors attended a six-day boot camp led by Reyes and Kocher. The actors were trained on their characters’ weapons systems and also learned small-unit tactics; how to drive and maintain their humvees; and of course, they did a lot of early morning PT.

Each actor had the exact same loadout as the actual Marines they portrayed.

According to Rob Harris, the show’s production designer, the cast based the gear on what each individual recon Marine wore during their deployment. For example, Lush’s character, Lance Cpl. Harold James Trombley, had a relatively stripped-down flak to make room for his M249 squad automatic weapon during the initial invasion, so that’s exactly what Lush wore in the show.

Because the show was filmed in South Africa, Namibia, and Mozambique where it was really hot, the costume design team was concerned that the added weight from the ceramic bulletproof SAPI plates might be too much for the actors. In the words of Susan Howie, the show’s assistant costume designer: “If we gave them the real thing, they would have actually died. It would just be far too hot. The actors never would never have managed even an hour in the real suit.”

The actors did stay in their uniforms for five-and-a-half months though, so there’s that.

The actors wore their uniforms for the entire five and a half months they were on set. This probably explains why they actually look like forward-deployed Marines as the show follows 1st Recon’s push deeper into Iraq before finally arriving in Baghdad.

The reporter in “Generation Kill” is never referred to by his name.

Lee Tergesen’s character Evan Wright, the Rolling Stone’s reporter who wrote the original book, is never referred to by his name in the show. He’s called “reporter,” “scribe,” “Rolling Stone” and occasionally a combination of insults and the word “liberal.”

The dialogue in “Generation Kill” was spot on.

Wright and the reconnaissance Marines he wrote about in his book sat down for an interview with HBO after the show’s release. Just as in the book and its televised adaptation, the Marines joke and banter with one another, making some of the same quips that appear in the HBO miniseries.

Through a mix of cringe-worthy jokes and dark humor “Generation Kill” captures the closeness of deployed Marines and the particular brand of humor that exists in tight-knit military units.

At the start of episode four, “Combat Jack,” a voice off-screen can be heard saying, “Hey white boy, what ‘chu waitin’ for? That hole ain’t gonna dig itself.” This is a reference to Oliver Stone’s Vietnam War drama “Platoon,” when Junior, played by Reggie Johnson, tells Charlie Sheen’s character to dig his fox hole.