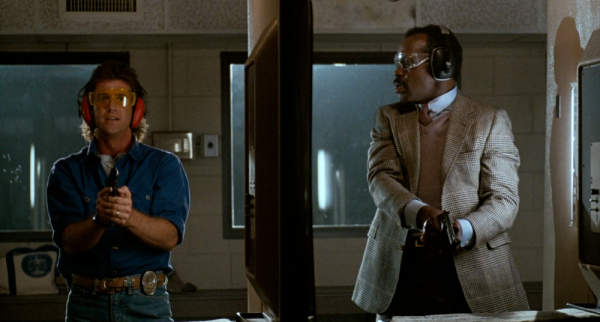 A dark and edgy buddy cop movie, “Lethal Weapon” hit theatres on March 6, 1987, becoming an an instant classic, and has withstood the test of time pretty well. Not Mel Gibson’s mullet though, thankfully it begins to shrink before finally vanishing in the later movies. More an action-thriller with some laughs than a slapstick cop movie, “Lethal Weapon” centers around aging detective, Roger Murtaugh, played by Danny Glover, who is paired up with Martin Riggs, an unstable and self-destructive detective grieving over the death of his wife, played by Gibson.

Set in Los Angeles, California, during Christmas, the two characters, who are both Vietnam veterans as are all the villains, become embroiled in a nefarious plot. Explosions ensue, there’s at least one kidnapping, and some bonding — you know, a lot of the stuff you expect from an action movie. From quips about the size of Murtaugh’s gun, to Riggs’ crazy eyes, the humor carries the movie through the violence, and helps soften the brooding tension underneath Gibson’s character, who is spiraling downward from unstable to utterly psychotic, before finally being saved by friendship and the acceptance of Murtaugh’s family — in true Christmas fashion.

In light of the holiday season, here are eight things you probably never knew about “Lethal Weapon.”

Murtaugh never says his signature line: “I’m getting too old for this shit.”

The first “Lethal Weapon” is the only one that takes place during Christmas.

Widely regarded as a holiday staple, the first “Lethal Weapon” is actually the only one set during the holiday season, but it was released in March.

Martin Riggs struggles with survivor's guilt, and that’s why Mel Gibson wanted to play him.

Gibson accepted the role of Martin Riggs because he wasn’t another two-dimensional action hero. The character is largely defined by his struggle to reconcile his wartime experiences, and the loss of his wife, with the fact that he’s still alive.

“I found that the guy in the Lethal script was not two-dimensional, he had something else going on, in fact he was on the verge of having a mental breakdown,” Gibson said in an interview for a short featurette on the making of “Lethal Weapon”

The actors were trained in three different forms of martial arts.

To prepare for their roles, the actors learned Capoeira, Jailhouse Rock (a fight style that originated in United States prisons) and Jiu-Jitsu. Gary Busey — who played Mr. Joshua, the movie’s principal villain — learned Taekwondo as well, because he’s a badass and a little crazy. His interest in martial arts began when he was working on “Lethal Weapon,” Busey told Vice.

Danny Glover’s crotchety detective, Roger Murtaugh tells Martin Riggs, that one of his buddies saved his life at the Ia Drang Valley in 1965. Ia Drang was the first major engagement between U.S. forces and the North Vietnamese Army. Gibson would later play Col. Hal Moore in “We Were Soldiers” which is a film adaptation of that battle.

Mel Gibson and Danny Glover worked out daily while preparing for the film.

Each film in the franchise features a bad guy with glasses. In the first it’s the balding goon, Gustav, who is later shot by Riggs in the club scene. In the second it’s the hitman who appears in the scenes when Riggs shoots the fish tank and when the hit squad attacks Riggs' trailer. In the third it’s a bearded henchman and the fourth has a member of the triad, again with glasses.

Bruce Willis was originally considered for the role of Riggs in “Lethal Weapon,” but Willis turned it down and got the lead role of John McClane in “Die Hard,” after Gibson turned it down, according to a June 2007 article in Vanity Fair.