Battlefield 1 May Be The Grittiest, Most Realistic War Game Yet

It’s 1918, and a young British soldier named Arthur Morehouse is sprinting through the bombed-out remnants of a building in... 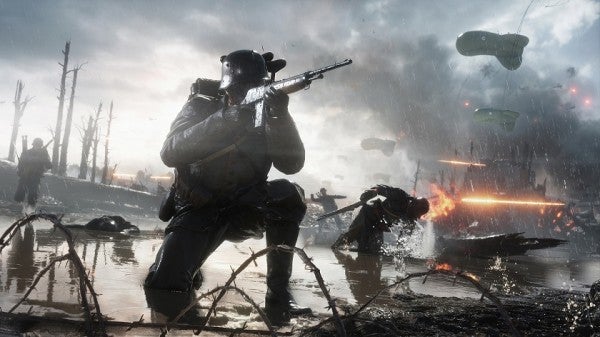 It’s 1918, and a young British soldier named Arthur Morehouse is sprinting through the bombed-out remnants of a building in France. German rifle fire kicks up around him, and as he turns a corner, a gout of fire from a flamethrower consumes him. He’s 19. Cut to Hugh Steele who is manning a side gun in a British tank. When an artillery round lands a direct hit, he dies. He is 23.

Steele and Morehouse are not real, and their deaths are entirely fictitious events in EA’s newest addition to its widely acclaimed Battlefield franchise, Battlefield 1, which officially launches on Oct. 21, though early release is available now, for a price.

In the game’s single-player campaign, players step into muddy boots and grimy uniforms, taking on multiple personas of fictitious World War I soldiers, with names and backstories delivered by an inner monologue that comes after you die. It’s one of the key ways the game reminds players their character (or many over the course of a single match) are stand-ins for real people. They are minor, but nonetheless memorable figures in a massive war, and now, a genre-altering game about World War I.

The two scenes are part of the single-player campaign and set the tone for the game by doing what few (or any) other first-person shooter has ever done: It constantly reminds players that this game is based on horrific and world-changing events.

“Battlefield 1 is based on events that unfolded over 100 years ago,” read the opening credits. “More than 60 million soldiers fought in ‘the war to end all wars.’ It ended nothing. Yet it changed the world forever. What follows is frontline combat. You are not expected to survive.”

And you won’t. In fact, you’re going to get a lot of guys killed, like I did when I charged a machine gun nest with a pistol, or when I tried to take on a tank with frag grenades. Sorry, fellas.

Typically, in first-person shooters, a player is dropped right into multi-player combat with no goal beyond gunning down the enemy. By giving previously unnamed soldiers a backstory, or even just a name, Battlefield 1 added a layer that actually makes the violence feel less gratuitous because it acknowledges the heavy cost of war.

Beyond the cut scenes of men in hospital beds, or the grisly deaths we see in the campaign, Battlefield 1’s multiplayer is in a class all its own. The gameplay unfolds on massive levels, where buildings explode as airships and biplanes plummet to the earth in fast-paced, first-person combat.

Even as Battlefield 1 seeks to raise the bar for first-person-shooter games, its attempt to humanize war while simultaneously using it for entertainment doesn’t fully balance out. In the end, players walk away feeling entertained, not guilty, which is fine. It’s a video game after all, and a damn good one that deserves credit for adding a new dimension to the genre. But, I’m not going to lose any sleep over the fact that I got a fictitious character killed. That being said, I’ll probably try to resist the urge to bayonet charge a tank, next time.