After weeks of losing myself in the rolling hills and country roads of Far Cry 5’s fictional Hope Country, Montana,... 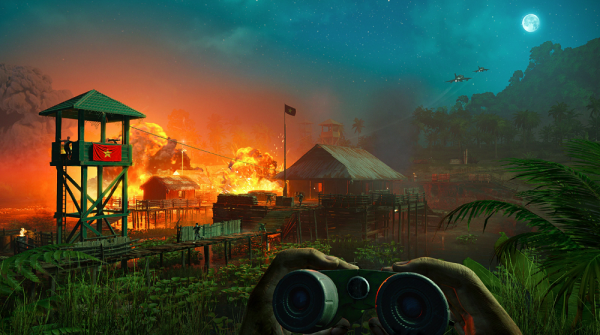 After weeks of losing myself in the rolling hills and country roads of Far Cry 5’s fictional Hope Country, Montana, strewn with the bodies of cultists who dared to stand against my all powerful shovel launcher, I’ve moved on…

Earlier this month, Ubisoft dropped its first downloadable expansion for Far Cry 5, titled Hours of Darkness, and I dropped, too — right off the fucking grid. Hours of Darkness is less of an add-on than a game unto itself — though it does also provide users a few new weapons for the vanilla campaign, including the oft-cursed but ever-popular M16 and the revered M60.

The expansion, $30 with the season pass, puts you in the boots of a U.S. soldier whose helo is downed by incoming fire in Vietnam. You’re lost, unarmed, and separated from your unit in a jungle crawling with enemy soldiers. The only way out is to rescue your missing squadmates and make it to the LZ ricky-tick.

Related: ‘Far Cry 5’ Taught Me To Stop Worrying And Love The Apocalypse »

Aside from a new setting, Hours of Darkness introduces a different style of play — it’s all about stealth. The perk trees are gone; ditto with the consumable item wheel. Instead, you can call in recon planes, air strikes, and accrue a new set of skills as you chain stealth kills. Various new skills let you automatically mark enemy targets and give you superhuman x-ray powers when using binos, but they vanish once you’re spotted by the enemy. And that can lead to comical moments, welcome respites from the somber tone of the campaign.

You’re sneaking through the jungle when you spot a pair of enemy soldiers by a fire. You creep up, bamboo stick in hand, throwing knife at the ready. It’s just you and your wits against enemy AKs. You prepare to toss a rock to distract them, then move in for the kill, nice and quiet like. But oh shit, you accidentally hit the wrong button and you just tossed a grenade at the wall. It explodes, knocks your ass sideways. They see you, and all those stealth perks expire, and now you’re dead.

That,or some giant jungle cat comes out of nowhere and mauls your face off.

Moments like that, when frantic button smashing derails your whole one-man-army shtick — and there are many — can make the DLC feel more like Tropic Thunder than Rambo. And after a week of binge-playing, I’m totally fine with that.

This is me right now: