The upcoming World War II satire ​JoJo Rabbit is in the business of mocking Nazis.  And based on the trailer: Business is a' booming. 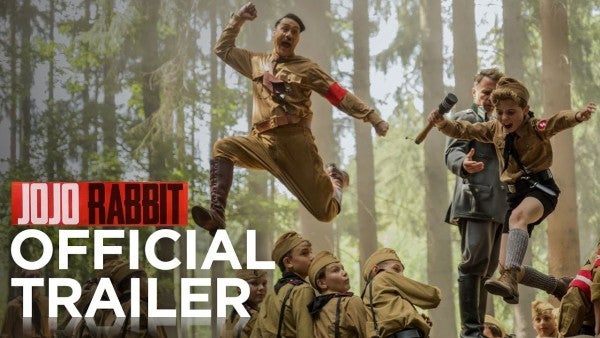 The upcoming World War II satire JoJo Rabbit is in the business of mocking Nazis.

And based on the trailer: Business is a' booming.

Set during World War II and directed and written by Taika Waititi, JoJo Rabbit follows Jojo Betzler (Roman Griffin Davis) a young boy and an out-of-place member of Nazi Germany's Hitler Youth who's joined in his blossoming fascist escapades by his imaginary friend Adolf, played by Waititi — who you may remember as the voice of Korg from Thor: Ragnarok.

Between his field trips to Jr. Nazi camp, where JoJo and the rest of his Hitler Youth buddies gather round for an evening of book burnings, play with grenades and knives — that doesn't end well, by the way — and frolics with his imaginary Fuhrer friend, JoJo discovers that his mother (Scarlett Johansson), is hiding a young Jewish girl in their house, played by Thomasin McKenzie.

Week one down of our anti-fuckface satire, Jojo Rabbit. Can't wait to share it with the world. Also, what better way to insult Hitler than having him portrayed by a Polynesian Jew?
🖕 #FuckYouShitler @jojorabbitmovie @foxsearchlight pic.twitter.com/bNZ2YlDgaF

While the movie is likely to take some flak for its farcical and silly depiction of the Third Reich — a regime that systematically orchestrated the genocide of millions — the biting satire on display in the trailer makes the film's stance on Nazis abundantly clear: Fuck Nazis.

JoJo Rabbit premieres at the Toronto Film Festival on Sept. 8 and will open in U.S. theaters on Oct. 18.