Have you ever wondered what it might be like to battle alongside the Greatest Generation against Adolf Hitler and the... 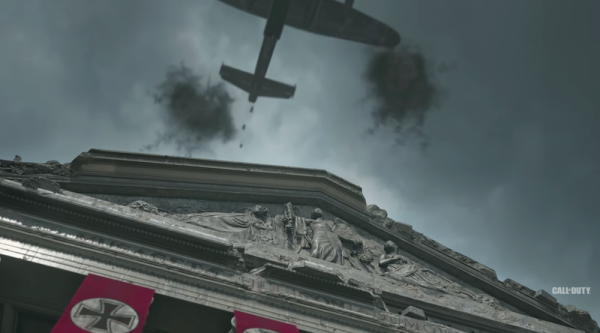 Have you ever wondered what it might be like to battle alongside the Greatest Generation against Adolf Hitler and the rising tide of Nazi tyranny? Well, you can’t actually do that, Call of Duty: WWII, the franchise's 14th installment, lets you virtually storm Normandy, drop into France with the 101st Airborne, and kill Nazi’s a la Inglorious Basterds …minus Brad Pitt’s shitty accent.

And while we first got a long, hard look at the intense new gameplay in a June preview, the new trailer Activision released on Aug. 14 shows off the game’s multiplayer beta view in all its bloody, fiery glory.

Activision certainly wants players to think of the game as the digital equivalent of a historic reenactment — sort of. “From the beaches of Normandy to the Hürtgen Forest, experience a dramatic story highlighting some of the most dramatic and iconic moments of World War II as a young soldier who is facing the unforgiving reality of war alongside his brothers in arms,” the official release page says.

The company isn’t wrong. Watching the trailer with headphones in almost makes the gameplay feel like you’ve been transported to Nazi Germany as the rumble of Luftwaffe planes drop bombs on war-torn Berlin. Ordnance drops from low-flying planes, showering debris on soldiers slogging through the ruins of European cities to battle Axis troops on the ground.

Not everything is historically accurate. There is a zombie mode, too: if war isn’t gruesome enough for you, you may as well add an army of undead Nazis.

The decision to release a World War II game marks a return Call of Duty’s roots after nearly a decade of developing games from different eras. The beta version will be available to PlayStation 4 owners on Aug. 25 and XBOX users Sept. 1. Call of Duty: WWII officially hits shelves Nov. 3.