Tom Hanks has signed on to both act in and executive-produce No Better Place To Die, an upcoming World War... 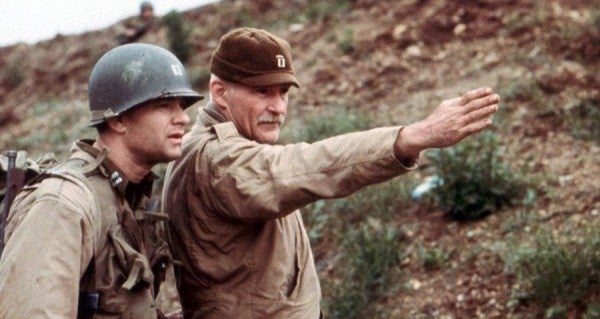 Tom Hanks has signed on to both act in and executive-produce No Better Place To Die, an upcoming World War II drama about the airborne Normandy landings on D-Day, written and directed by Marine vet and seasoned technical adviser Dale Dye.

The news of Hanks’ addition is good for U.S. military veterans, and not just for World War II film buffs: Dye is looking to cast up 50 veterans as actors, including as many as 35 speaking roles, with department heads giving vets priority for support positions on set.

“When I say department heads, I’m talking about set design, costumes, props, armory, hair and makeup, and all the other support elements that will engineer making a movie,” Dye told Task & Purpose. “I’m going to tell all those department heads that veterans get priority, so folks who want to be technicians in the film industry.”

“I’m going to try to get them their shot on this film, also,” he added. ”I’m trying to help guys who really want to do this for a living.”

The movie, written and directed by Dye, follows a band of airborne soldiers scattered across Normandy during their drop ahead of the D-Day invasion on June 6, 1944. A mishmash of troops from different units, they folded into a single rifle company to seize and hold La Fière bridge, a crucial causeway which connected the French countryside with the Normandy beachheads, against German reinforcements headed for Omaha and Utah beach. Had that company not held, the beach landings might have been a catastrophic failure.

“What I discovered, writ large, was that this was an example of what happens in our military when all the big plans, laid by all the generals and colonels, become victims of the exigency of war, that is, when they go right in the crapper,” Dye told Task & Purpose. “It’s the sergeants and the young lieutenants, and the PFCs and the corporals, who cobble together, knowing what has to be done, and just go out there and do it against all odds.”

Dye wrote the script in 2011, but has struggled to find backers for the film, until now. In addition to signing Hanks to produce and act, Creative Artists Agency and Gersh, are arranging financing for the film. (No Better Place To Die should not be confused with Hanks' other WWII film venture, Greyhound, which is looking to cast vets as extras.)

Related: Tom Hanks Wants Veterans To Audition For His Next War Movie »

“The Hollywood procedure for putting a film together, especially an expensive film — and we’re a $30 million picture, that’s a lot like herding cats or trying to get snakes to follow a straight path — it’s a very difficult extended process,” Dye said. “But we’re right in the middle of it and gaining a lot of traction.”

Though casting hasn’t started yet, Dye hopes to begin filming this summer, with the goal of a 2019 release date, to coincide with the 75th anniversary of D-Day. In total, Dye said he hopes to get 40 to 50 veterans in front of the camera, of which, 28 and 35 will be speaking roles. “Once I’m certain that we have the money we need, and we have the main actors that we need …. then we can start the process of auditioning the real veterans for the rest of the roles,” Dye said.

A decorated Marine combat veteran and a three-time Purple Heart recipient, whose career included tours in Vietnam as an infantryman and a combat correspondent, Dye retired from the Marines 1984. And in the years that followed he’s leveraged that experience as a military technical adviser through his company Warriors Inc., bringing authenticity and emotional realism to the projects he’s worked on, which include Saving Private Ryan, Band of Brothers, and Platoon, among others.

In terms of realism, getting all the little details right — how to hold a weapon, wear a uniform, or knowing what ribbons go on what side of your service jacket — is important, sure, but it’s “ultimately superficial” Dye said.

While it differs by era, theater, or unit, there’s a way of carrying oneself, of talking, and behaving — an attitude among service members that’s timeless and universal. And that’s what makes the difference between a technically accurate war movie, and a realistic one — or, better yet, a relatable one.

“When I was first motivated to even start as a military adviser to movies and television, that’s part of what I was trying to do, to bring that understanding, that empathy, that intimate knowledge, to actors, who for the most part, especially these days, had absolutely no experience with it,” Dye told Task & Purpose. “I felt if I could do that, if I could make them walk a mile in our boots … their portrayals of who we are, what we are, how we act, how we relate to each other, how we think, how we feel, those things would come across.”

In addition to surrounding the film’s actors with scores of veterans, Dye said he plans to put stars through his standard training regimen: a three week boot camp in austere conditions meant to recreate the setting and environment the service members’ portrayed in the film had to endure

“We’ll do my standard evolution that I do for every film that I work on,” Dye said. “But I’m hoping that in addition to that, that we’ll have a process of osmosis that’s going on the whole time, where you get these real veterans next to the actors, and they can observe now, what they’ve been told, and what they’ve been forced to do in training.”