For Veteran Couples, Some Things Don’t Need To Be Said

I’m going to have a roommate here pretty soon, and it’s not a third cat. While I am somewhat notoriously... 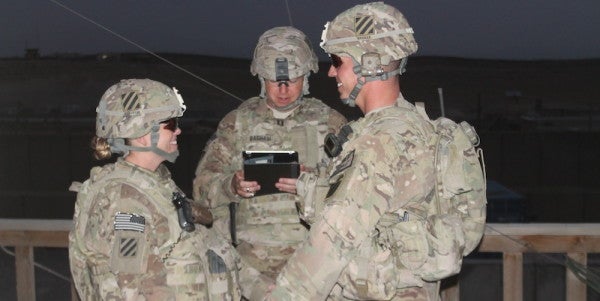 I’m going to have a roommate here pretty soon, and it’s not a third cat. While I am somewhat notoriously hard to date, someone not only took the bait, but is moving in with me in early June. With him will come some odds and ends of furniture, miscellaneous dishware, and most formidably, his Marine Corps ceremonial sword.

Not only will I have a roommate for the first time in years, not only will it be a commitment, he is a Marine Corps veteran and an officer to boot. My senior enlisted Army self is somewhat chagrined at this turn of events, and it has little to do with sharing closet space.

And yet, despite my many apprehensions over dating at all, after nearly a year now I have found that dating — and already partially living with — another veteran actually makes some things in life immeasurably easier. Here are a few of those things.

Definitions are kept to a minimum.

Even soldier to Marine and officer to enlisted translates better in many cases than soldier to civilian. The benefits of this are many, but the added bonus is that your funny stories are actually funny again because you aren’t stopping every three sentences to explain what a field-expedient latrine is or to spell out every acronym. He gets it. He also gets it when he receives my texts saying, “I’m still at the VA. I may be late for lunch, and given the progress made in the line at the pharmacy, possibly also dinner. And, in general, life forevermore.” Mostly because he had an appointment there yesterday during which he’d texted his concern he’d need someone to air drop supplies.

You can be a little more gross early on.

There’s always that weird breaking-in period with couples where you are a little embarrassed about things like bodily functions for at least the first few months. Not so much with another veteran. We’ve both had to poop off the back of a truck during a field exercise or a convoy, making any “everybody poops” conversation moot right out the gate.

There’s a different level of support.

Civilian friends, significant others, and families provide a world of support. However, there is something to be said for someone who just takes your hand when the cab driver seems to be finding every pothole in the street and you start getting that look of panic in your eyes. No explanation is needed for your reaction, and they know that the only thing necessary is a gentle reminder that you are unlikely to explode.

You can call each other out.

Sometimes you need to be told to suck it up and drive on. Unlike a civilian significant other, you probably won’t get offers of a massage when you complain of being sore after working out. You’ll get a ton of ridicule because you should have known better, get told to take a knee, and drink water, or if you’re with someone really special — 800mg of Motrin. The same goes for other small problems: They know the difference between a real issue and when you are in fact just being a baby, and they make damn sure you do, too.

It’s all about efficiency.

Take out the trash. Get up an hour early tomorrow. Close the door behind you. There’s something to be said for someone who understands the simplicity of things being done for a reason, and even better, the simplicity of implicit instructions. We just know some things will get done because we both had to live by the same standard during our adult lives, and that’s pretty glorious. And if things do get messy from time to time, there isn’t any offense taken when the guilty party is called out for being a disgusting sack and told to square it away. Because that’s communication.

Really, any arguments are trivialized when someone calls you out for using your staff NCO voice or makes fun of you for knife-handing the cat.

Sure, all of these things might happen with a close civilian significant other, but the real trick is that with another veteran these things are immediate. There wasn’t a break-in period, there wasn’t a time when I asked if he killed anyone with that damn sword. There wasn’t that awkward silence after you tell them about how you spent more than a few nights using your body armor as a blanket because you really didn’t want to get up and go to the bunker when the sirens went off for the eighth time that day. Plus, when someone stumbles on the box of “reallocated” MREs in the storage unit, there’s someone just as excited about the fact that there are M&Ms; in numbers 6 and 17.

Feel free to comment on any perks (or mishaps) I may have left out, but the reality of dating a veteran is that it’s like you are with your veteran buddies, only instead of occasional phone conversations that start and end with someone endearingly being called a dumbass, you can now come home to it every day.

But no, really, Marine, that sword is not being hung up in the living room.