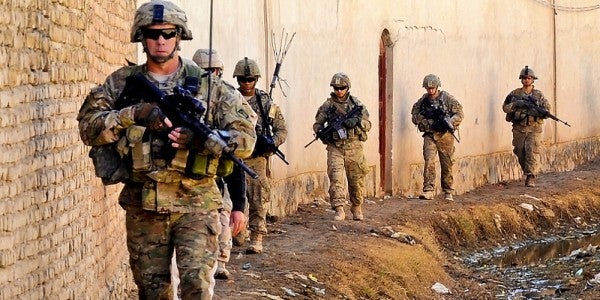 The Army is pulling out all the stops in its race to make soldiers look as futuristic as possible — and be as safe as possible. Part of the Soldier Protection System, there’s new armor in the works, as well as a new helmet, which looks it was pulled from science fiction, or Airsoft. But the service isn’t forgetting the little things, like the importance of seeing what you’re shooting at, which is why it’s creating new glasses and goggles.

Because the new helmet’s visor isn’t tinted, the new eyewear, officially called Transition Combat Eye Protection, automatically switches from a clear setting to a dark tint, and then back again, depending on the amount of light, according to PEO Soldier.

In less than a second, soldiers operating in sunny arid environments will be able to adjust quickly and easily, without carrying around multiple expensive glasses that are just going to get lost.

At $200 a piece, soldiers will have just one expensive piece of gear to lose. What could go wrong? The eyewear won’t be on the list of items soldiers are required to carry, according to Army Times, but they’re authorized to use and commanders can purchase them for their troops if they want to, because that’s sure to happen.

Looking at the glasses and goggles, then back to the helmet, it does make you wonder: If the idea is to help soldiers operate more easily in varying light conditions, it would be a bit of a pain to get to the button on the eyewear to turn it on, especially while wearing a helmet which encases your head. Fortunately, once the glasses or goggles are on, the transition is automatic. Just don't forget to activate them before heading out.

The article has been updated to clarify that the TCEP system transitions from light to dark automatically once turned on, according to a statement received from PEO Soldier after publication. (Updated 4/17/17, 3:18 pm EST).