Inside a dark shooting range at Fort Belvoir, Virginia, Army Master Sgt. Lashon Wilson stands behind a barrier, kitted out... 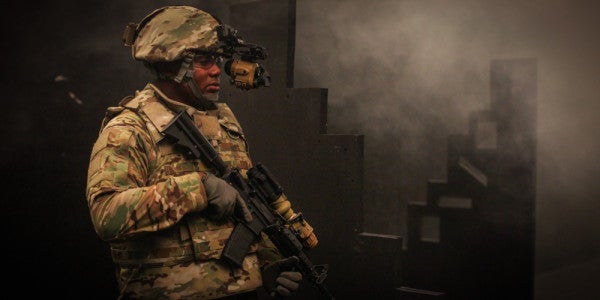 Inside a dark shooting range at Fort Belvoir, Virginia, Army Master Sgt. Lashon Wilson stands behind a barrier, kitted out with body armor and an M4. In front of the M4’s optics is an advanced thermal sight, and affixed to his kevlar is a new set of night vision goggles. As Wilson looks behind him, he keeps his rifle pointed downrange. On an overhead flat screen, there’s a video feed showing Wilson’s field of view, and hovering in the center is a circular reticle showing a silhouette target — on the opposite side of the room.

The goggles and thermal sights produced by DRS Technologies and BAE Systems on display at the July 27 Program Executive Office Soldier media demonstration are part of a new platform of optics the Army has been working and building toward for more than a decade, and they literally allow a soldier to look in two directions at once.

This new system comes in three parts: There’s the Enhanced Night Vision Goggle III, a new and improved thermal optic called the Family of Weapon Sights – Individual, and a suite of software and hardware — officially dubbed Rapid Target Acquisition technology — which enables the ENVG-III and FWS-I to work in tandem. When I say in tandem, I don’t mean it in a “Hey, bring this in case that breaks for redundancy’s sake” kinda way.

“As a Cav scout, this allows me and my scouts to be on the ground during an observation post or if we’re on a screen line, we now have thermal devices not only on our heads, but also on our weapons,” Wilson, the senior enlisted advisor for Soldier Maneuver Sensors, said during the demonstration. “We can now look and see multiple different targets at the same time and pass that information back and forth to the squad.”

Here’s how the goggles and thermal optics work.

Now in its third iteration since research began in 2002, the Army’s Enhanced Night Vision Goggles allow a user to see during low-light conditions, through rain, fog, sleet, or dust.

Unlike its predecessor, the PVS-14, the ENVG-III has a thermal setting that makes it effective during the day. It also offers the ability to outline silhouettes, so a trooper on patrol can pick out a target peeking around a barrier or tree.

The Army's Enhanced Night Vision Goggles can outline objects and shapes, making it easier to pick out targets.Task & Purpose photo by James Clark

The ENVG-III has a 40-degree field of view, runs on four AAs and has a seven-hour battery life when used alone, and a three-hour lifespan when used with the FWS-I.

Right now, the earlier ENVG variants are being issued to infantry brigade combat teams, U.S. Army Special Operations Aviation Command, and special operations forces, though more units will get the new tech as additional goggles are produced. However, the newest ENVGs, which cost roughly $7,000, won’t be used to phase out existing night vision goggles.

The Army plans to begin procuring 47,000 ENVG-IIIs as early as the third quarter of fiscal year 2018.

The Family of Weapon Sights – Individual, or FWS-I

The FWS-I provides dismounts with thermal scopes, an advantage that was previously limited to just mounted troops. The FWS-I has a range of 960 meters, uses three AAs and has a battery life of seven hours — or three hours when synced with the ENVG-III.

The Family of Weapon Sights – Individual thermal sight mounted on an M4 during a media demonstration at Fort Belvoir, Virginia on July 27.Task & Purpose photo by James Clark

Currently the FWS-I only works for the following arms: M4s and M16s; M249 squad automatic weapons; SMAWs and AT4s. However, crew-served and sniper variants are in the works and should land in soldiers’ hands by fiscal year 2021.

The service hopes to get its hands on 36,000 FWS-Is, priced at $9,500 each. The new sight is in its first iteration after research began in 2009, and the Army intends to begin procuring FWS-Is by the second quarter of the 2019 fiscal year.

When you use the FWS-I and ENVG-III together, you’re pretty much the star of your own first-person shooter.

With legacy systems — think PVS-14s and PVS-7s — your field of view was limited to one target or direction, cast in a sea-sick green hue, with limited depth of field. The ENVG-III and FWS-I are meant to change all that: A user can actually toggle different feeds inside their night vision goggles.

With the Rapid Target Acquisition technology, the ENVG-III communicates wirelessly with the FWS-I to paint a reticle in a user’s field of vision. This “picture-in-picture” mode allows a shooter to quickly identify and engage targets. It also lets the user see in two directions at once — in an operational environment, that might mean that a soldier on patrol during a security halt could scan his flank while still maintaining vision downrange, where his rifle is pointed.

“This becomes more intuitive because you get that larger picture,” Dean M. Kissinger, an electronics engineer who’s been working on the project since its early days explained. “Not only can I see that guy popping out, I can rapidly engage him, because I’m not having to scan with my narrow field of view.

Then there’s the full weapon sight mode, which lets a shooter see from the weapon’s point of view.

Army Master Sgt. Lashon Wilson poses for a photo with the ENVG-III and FWS-I during a media demo at Fort Belvoir, Virginia on July 27.Task & Purpose photo by James Clark

“That’s really the point that we’re trying to drive home — the integration of these two capabilities,” Kissinger said. “This is the first time we’ve deliberately taken a weapon mounted targeting sensor and integrated it with a helmet mounted mobility sensor.”

More than just offering the ability to look in two directions, the FWS-I and ENVG-III make the whole process of moving, shooting, and communicating at night, or in difficult to see situations, easier, a lot easier.

“What we’ve done is we’ve taken those two technologies and paired them together and for the first time we’ve integrated those with maneuvering and targeting sensors all together at once,” Maj. Kevin Ryan Smith, the assistant product manager for the FWS-I and RTA with PEO Soldier said during the media event.

“The real key takeaway is having that situational awareness on the battlefield really enhances a soldier's ability to fire, maneuver and operate,” Smith said, adding that when used together, the ENVG-III and FWS-I give “every soldier the ability to operate in any environment.”