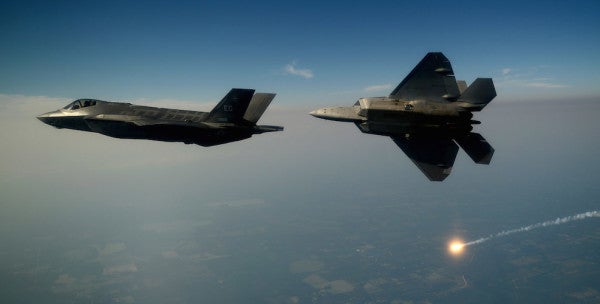 Two Air Force squadrons are about to get the armed forces’ first fully combat operational F-35A multirole fighter outfitted with the latest iteration of a long-awaited software suite after a year of testing and training missions, Aviation Week reports, finally allowing pilots to utilize the joint strike fighter complete arsenal of capabilities and weaponry.

The Block F3 software, on the verge of completion after several turbulent months in development, will finally give pilots access to the F-35’s full suite of air-to-air and air-to-ground weapons systems, including the the AIM-9X Sidewinder missile and the Joint Direct Attack Munition and GBU-39 Small Diameter Bombs favored by the Department of Defense in its escalating air campaign against ISIS in Iraq and Syria.

But the highly lethal aircraft may make its international combat debut in the Pacific rather than the skies above the Middle East and Western Asia. And the reason is obvious: North Korea’s traditional saber-rattling has only escalated in recent months, with Pyongyang going so far as to launch a missile over Japan on Aug. 28.

“The Air Force is preparing to station the F-35As of the 34th Fighter Squadron out of Hill AFB, Utah, in the Pacific region in the coming months,” Kyle Mizokami at Popular Mechanics smartly observes. “Japan will receive 38 of its 42 planned F-35s starting this year, and F-35 deliveries to South Korea will begin next year, as the first South Korean aircraft just hit the Lockheed Martin assembly line in Fort Worth, Texas.”

Though North Korea’s latest missile flew over the island of Hokkaido, making a 1,700 mile flight and harmlessly landing in the Pacific Ocean, it was still North Pyongyang’s boldest display of hostility yet, spurring President Donald Trump to remind the regime that, when it comes to Pentagon, “all options are on the table.”

Those options currently include a squadron of F-35Bs is currently stationed with the Marine Corps at Iwakuni in Japan. And though not at full capacity, they pose a potent deterrent to the belligerent North Korea — a deterrent that may only strengthen with the potential arrival of the combat-ready F-35As.

“Without assistance from China or Russia, North Korea would stand no chance of defending against a wave of low-observable Joint Strike Fighters, which would be used to clear the air of opposing jets, hunt down rogue missiles, and protect advancing ground troops,” Aviation Week wrote.

“North Korea can't take those [F-35] aircraft on in the air,” Bruce Bennett, a Rand Corporation expert on the Pacific theater, told Aviation Week. “They can't take them on with surface-to-air capabilities, so it pushes them to say, 'We've got to take those aircraft on when they're on the ground. That drives them to think about the use of missiles and potentially nuclear weapons or other payloads against key airfields to try to neutralize that threat. Both sides have an incentive to go first.”

Over the next four years, the U.S. military intends to station at least 100 F-35s in the region, according to Popular Mechanics. Maybe the fear of the F-35’s Mach 1.6 power is just enough to make North Korean leader Kim Jong Un shake in his boots.