Few pieces of gear are steeped in as much martial history as the KA-BAR Fighting Utility Knife — from stories... 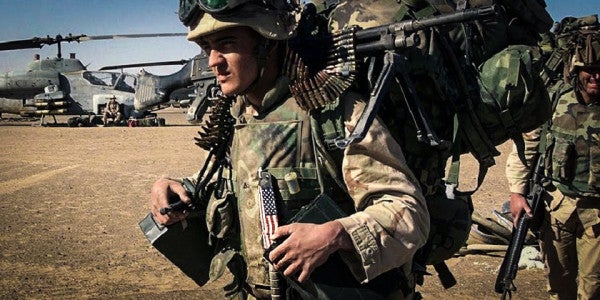 Few pieces of gear are steeped in as much martial history as the KA-BAR Fighting Utility Knife — from stories of brutal close-quarters combat to myths about the knives being so durable that they were sent along with wooden shipping crates instead of crowbars during World War II.

Today marks the 120th anniversary of the company that gave the military its most iconic blade.

Even the name KA-BAR has its roots in legend. As the story goes, a fur trapper in the 1900s wrote a letter about killing a grizzly bear with a knife from the Union Cutlery Company, which began producing its first knives in 1898. The letter was so smudged, all that was made out from the passage was: “K A Bar.” And so the KA-BAR trademark was born, and years later, Union Cutlery was renamed after the brand.

Related: How The KA-BAR Became The American Warfighter’s Blade Of Choice »

And though the company hasn’t had a military contract since World War II — the halcyon days of issued knives — “KA-BAR Knives have been carried in every conflict since” Joseph Bradley, the sales and content manager for KA-BAR, told T&P.;

So we asked you, our “BAR” slay’n, crate and can-opening, tacticool knife-carrying readers, to send us your KA-BAR pics. You didn’t disappoint.

Okay, someone took the words “knife hand” a bit too literal:

And this guy, who got it backwards:

Even the Army gets in on the KA-BAR action:

Something tells me this one wasn’t ceremonial:

Well, it is does have the word “utility” in its name:

Expensive kitchenware is for suckers:

Don’t bring just one knife to a gun fight. Bring them all:

Sure it’s rusty, but it still cuts and if the knife doesn’t get you, the tetanus will: